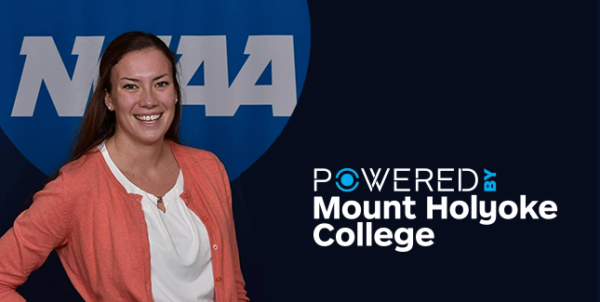 When Cathleen Pruden ’16 arrived on campus in the fall of 2012 she was pretty confident in her plans to enroll as a psychology and education major and go on to become an elementary school teacher. But during the spring of her junior year, Pruden began to experience some doubts about her plan.

A member and captain of the Mount Holyoke swim team, Pruden often found herself thinking more about the swim team and her involvement in the Student-Athlete Advisory Committee (SAAC) than about her academic achievements. “I would feel guilty that I was more excited about practice than about class,” she says.

Pruden, who is now in her second year as assistant swim coach at Bowdoin College, didn’t realize that in her roles as SAAC representative and team captain she was acquiring real-world skills to prepare her for a job beyond college. Whether she was being called upon to help organize out-of-season workouts or to resolve teammate disputes, Pruden was often putting communication skills to the test and honing her leadership skills.

“While I wasn’t getting a grade for my athletic experiences, I was learning in a way that significantly impacts how I now relate to my swimmers and allows me to offer them advice on their own journeys as student-athletes,” says Pruden.

During her senior year at Mount Holyoke, Pruden spent one day a week at an elementary school as part of a licensure requirement for her education degree. While she enjoyed her time there, she realized that she didn’t have the same excitement toward the work that her classmates did. “I would walk into [class] the next day,” she says, “and everyone would talk about how they wished they could go teach every day.”

With a little trepidation and a lot of support, including from Jennifer Jacoby, Dr. Virginia Apgar professor of education, Pruden decided to drop the licensure portion of her major. “Professor Jacoby was a great sounding board for me and had a sense of what it meant to me to be a student-athlete,” says Pruden. “That kind of honest, genuine support was crucial. If I can have a fraction of the impact on my athletes that my mentors at MHC did on me, then I will be thrilled.”

In addition to being relieved to not be in the classroom every week, Pruden found she had more time to expand her coursework, enrolling in Intro to Sports Pedagogy, a decision that first led her to consider a career as a coach. She also found she had more time to spend in the pool. “I was in a position where I could be satisfied with the end of my swimming career because I truly knew I had given it 100 percent,” she says. During her time on the swim team Pruden set thirteen Mount Holyoke records, including nine individual, becoming the first student-athlete from the College to be named a Top 30 honoree for the 2016 NCAA Woman of the Year Award.

Pruden still sometimes feels a little overwhelmed by how different her life is now than how she first envisioned it as a first-year. “I am a planner to my core; there was no real plan to end up here. Yet here I am doing something that makes me incredibly happy.”