Funding Women in Science for More Than 40 Years 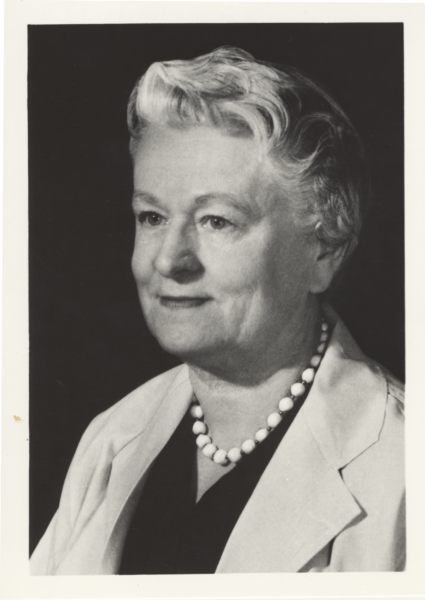 Rachel Fuller Brown, class of 1920, almost didn’t attend Mount Holyoke. Although she was a strong student and hard worker at Central High School in Springfield, her family had little money, and had a friend of her grandmother’s not offered to pay her tuition it is possible she may not have gone to college at all. Brown entered Mount Holyoke intending to pursue a degree in art history, but, after taking classes with chemistry professor Emma Perry Carr, class of 1902, she decided to major in chemistry. She later earned her doctorate in chemistry from the University of Chicago.

After completing her formal education Brown began working in the Division of Laboratories and Research of the New York State Health Department. There she researched pneumonia, developing a vaccine still used today. But her most notable project didn’t start until 1948, when she began working with Elizabeth Lee Hazen. Hazen, a quiet woman who abhorred photographs and interviews, was a top authority on fungus and bacteria. The two lived many miles apart — Hazen in New York City and Brown in Albany — but that didn’t stop their collaborative research. They sent mason jars of soil to each other through the mail for years until they finally struck gold with the bacteria known as Streptomyces noursei: an antifungal antibiotic they isolated from the bacterium and named nystatin, after New York state and its efficient postal service that facilitated their research. Although penicillin had been discovered in 1928, many patients experienced a nasty fungal growth as a side effect, and before Hazen and Brown’s discovery there was no known antibiotic that would also kill this potentially deadly fungus. Joining forces beyond the gates

Read about current alums who are also coworkers.
Fall 2019 Quarterly

When Brown and Hazen presented their findings to the National Academy of Science in 1950, phone calls started flooding in from pharmaceutical companies hoping to capitalize on nystatin. Royalties eventually totaled $13.5 million, but the two scientists had no interest in that kind of money. From the very beginning of their research, all they wanted was to help people — so they donated the royalties to the philanthropic Research Corporation for Scientific Advancement, which used half the grants to further scientific research and the other half to start the Brown-Hazen Fund, which focused on medical mycology—the study of fungal infections.

Brown was set on supporting female scientists the world over, with a particular focus on China and her own Mount Holyoke. “It is imperative that the average woman scientist recognize her own potentials, believe in herself, and determine to give unstintingly of herself to her chosen career,” she once wrote. A few dollars didn’t hurt either. In 1977 Brown and the RCSA established a $100,000 fund for Mount Holyoke students that became known as the Rachel Brown Scholarship-Fellowship Program. The aim of the program was to “assist generations of promising young woman scientists, for which we are especially grateful.” The Rachel Brown Fellowship continues to fund the first year of graduate study in the physical or biological sciences for alums who majored in those fields. Brown had a long history of donating to the College, including a $50,000 grant to buy an electron microscope in 1968. Beyond Mount Holyoke, in just 10 years after its inception, the Brown-Hazen Fund provided more than $1,000,000 in grants to scientists and institutions in need of funding. Because Hazen was so private, Brown became the face of the fund and was known as a prominent philanthropist, as well as being a prominent member of the American Association of University Women.

In 1975 Brown and Hazen were the first women to receive the Chemical Pioneer Award from the American Institute of Chemists. Brown was elected a fellow of the New York Academy of Sciences long before that, and upon her retirement in 1968 she received the Distinguished Service Award of the New York Department of Health, as well as the Rhoda Benham Award of the Medical Mycology Society of the Americas in 1972. In 1994, 14 years after her death, Brown was inducted into the National Inventors Hall of Fame. Despite her many awards and successes, Brown didn’t thrive on the fame, money or recognition. She continued her work for the pure love of science and an intense drive to make the world around her a better place.