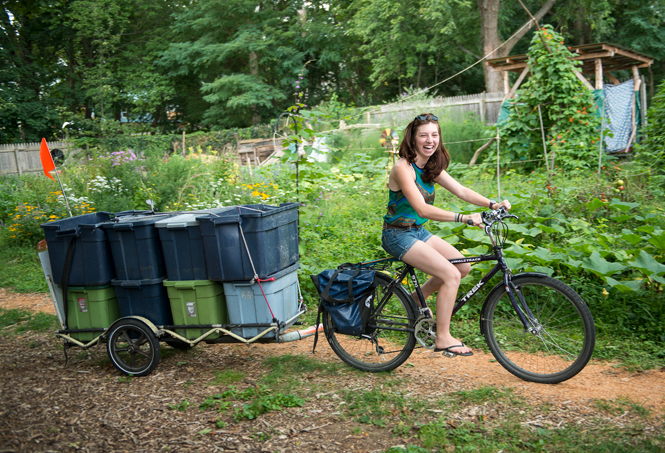 On Labor Day weekend, a white Mercedes pulled up in front of the Pedal People house in Florence, Massachusetts. The car, a 1991 model that runs on alternative fuels, disgorged Dana Rubin and Hannah Blackmer, a pair of environmental-studies majors from the class of 2012. They had come to interview Alex Jarrett and Brett Constantine about their worker-owned, bicycle-based hauling-and-delivery business, but were excited by everything they saw at the house, which abuts a rail trail: A solar panel! A clothesline! Rain barrels! Compost! A garden! These were exactly the sorts of small-scale, practical, and cost-effective solutions to living sustainably that Rubin and Blackmer were seeking to highlight on their “Search for Convenient Resilience,” a cross-country road trip that had kicked off twenty-four hours earlier in their home state of Vermont. Interviews with ecological innovators were at the heart of the project.

The grease-car duo documented their odyssey extensively through blog posts, photos, and interviews with the ecologically-minded
Web exclusive

Rubin set up the pair’s videography equipment near a picnic table in the backyard, explaining that the Canon video camera and other items were on loan from the Regional Educational Technology Network in Burlington, Vermont, which broadcast their interviews on public-access television stations across the Green Mountain State. As bikers, joggers, dog walkers, and others made their way down the rail trail, Rubin filmed while Blackmer peppered Jarrett and Constantine with questions about how Pedal People collect trash and recyclables using bikes outfitted with cargo trailers. Afterward, Jarrett invited the two to take a Pedal People bike—complete with loaded trailer—for a spin. After a few wobbles, Rubin got the hang of it. “Oh, it’s not that bad at all!” she said. “I’m gonna become a Pedal Person!” Blackmer, up next, flawlessly executed a tight turn. “This,” she said, smiling, “would be an awesome job.”

The Search for Convenient Resilience website says Rubin and Blackmer’s friendship was forged over “good cheddar, good brews, good humor, and passion for environmental awareness.” Good books also played an important role, especially Frances Moore Lappé’s EcoMind: Changing the Way We Think, to Create the World We Want, which the pair read in Professor of Environmental Studies Lauret Savoy’s senior seminar. “The book was incredibly inspiring and encouraged us to really take a leading role in the next phase of our lives—to lead with intention,” Rubin says. So, during the spring semester of their senior year, they teamed up to do an independent study under the supervision of Professor of Geography Thomas Millette. Weekly meetings with Millette helped Rubin and Blackmer turn a nebulous concept having something to do with the environment into the Search for Convenient Resilience, a full-fledged project with a logo, website, blog, Facebook page, Twitter account, YouTube channel, ambitious itinerary, and $15,000 fundraising goal. Although Millette was involved in the project from the beginning, he gives Rubin and Blackmer all the credit. “They really made this happen,” he says. “When you’re as old as I am, you’ve seen lots of students come into your office with wacky ideas, and they never amount to anything. This was a wacky idea that really did mature and turn into something.” Rubin and Blackmer raised funds the old-fashioned way—asking family members, friends, and MHC professors for money—as well as the newfangled way—creating a campaign on Indiegogo, a crowd-source-funding website similar to Kickstarter. They also secured the financial support of corporations and nonprofits. EcoMind author Lappé’s Small Planet Institute, in Cambridge, Massachusetts, chipped in, as did Mount Holyoke’s Miller Worley Center for the Environment, whose director, Associate Professor of Environmental Studies Timothy Farnham, calls the Search for Convenient Resilience a “great, inventive project.” 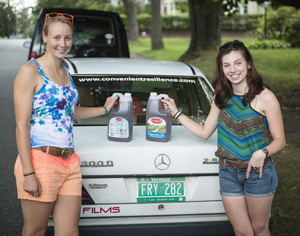 Rubin and Blackmer’s single biggest expense was their car, a 22-year-old Mercedes-Benz 300D with 135,000 miles on it. It runs on filtered waste vegetable oil and other biofuels, and they filled up the tank at biodiesel stations whenever possible. “Back in the day, diesel engines were designed to run on vegetable oil,” they wrote in an email. “Old diesel engines are perfect for biodiesel/diesel cocktails and don’t require conversions. We pour our alternative fuel into the tank just like you would gasoline.” The car, which Rubin and Blackmer named Princess Frywalker, ferried the pair across the country. They stayed with friends and relatives, and conducted interviews with people who model small-scale sustainability. They planned to fashion not only blog posts but also webisodes and podcasts out of the interviews, in hopes of inspiring others by example. “‘Monkey see, monkey do’ is really what we’re built on,” Blackmer says. Their travels came to an abrupt halt on the forty-eighth day of the project, when Princess Frywalker was stolen outside Rubin’s cousin’s suburban home in Sacramento, California. In addition to the car, which hasn’t been recovered, and its supply of grease, the pair lost their videography equipment, laptops, wallets, camping gear, and other personal belongings. “We are still so shocked,” they wrote in an October 19 email, “but are doing our best to stay positive.” In the end, they decided to return to Vermont and continue the project from their home base. “We do not feel defeated,” they blogged on October 24. “Rather, we feel empowered and motivated to begin the next branch of our work. Days one through fifty were a phase of amazing research and development, and now we move on to application and outreach”—specifically, expanding their website into an educational resource, and writing a book about their project. If their supporters’ enthusiasm is any indication, Rubin and Blackmer are already a success. “What Dana and Hannah learned and shared with the rest of us will no doubt nudge us all toward a more sustainable way of living,” MHC Professor of Geology Al Werner says. “To be sure, having their car stolen halfway through their trip was unfortunate, but here too they remind us to not give up when things get difficult. We were very proud of them as they launched their trip, and we are even more proud of how they faced this adversity and are moving forward. Their journey is far from over!” UPDATE: On new year’s day, Rubin and Blackmer’s blog jubilantly reported that Princess Frywalker was back! When asked how that happened, they replied, simply, “miracles.” —By Christina Barber-Just

» Read More: Sustainability 101
Coast-to-coast interviews by Dana Rubin ’12 and Hannah Blackmer ’12 with people reducing their environmental impact yielded heaps of information about how to be more sustainable. Here, they offer some of their favorite tips.”] ADVICE Share stuff. WHY? There’s no need for every house on the block to have its own snow blower, lawn mower, and so forth. We consume too much. “We all love having our own set of pruning shears, but if we stop to think about it, how often do we actually use them? Sometimes it’s hard to justify that we actually get our money’s worth with a once-or-twice-a-year need.” INSPIRATION Wolf Bravo, of Marbletown, New York, who started a community tool cooperative FIND OUT MORE ADVICE Schedule a free home-energy audit. WHY? Increasing your home’s energy efficiency in ways large (solar panels) and small (compact fluorescent light bulbs) saves money. “Being more sustainable is cost effective.” INSPIRATION 2100 Lakeside Emergency Men’s Shelter, in Cleveland, which cut costs by installing waterless urinals and low-flow showerheads and faucets, among other initiatives FIND OUT MORE ADVICE Use green building techniques. WHY? Green homes use less energy. “The idea is to use minimally refined natural materials that are available in the local environment (such as clay, wood, and straw) as well as reclaimed materials from recycling centers and dumps (such as wood and glass) to build beautiful, affordable living spaces.” INSPIRATION Chris McClellan, of Burton, Ohio, a member of the nonprofit Natural Building Network FIND OUT MORE ADVICE Grow some of your own food. WHY? The more food we produce ourselves, the less we’re dependent on food conglomerates. Plus, it’s just plain rewarding to pull, say, a squash from your own garden. “Small areas can be extremely productive; you don’t need a lot of space to grow a large percentage of your own food.” INSPIRATION Harvest Moon Backyard Farmers, of Minneapolis, which helps green-thumb-challenged homeowners and businesses establish their own gardens FIND OUT MORE ADVICE Swap driving for biking. WHY? Biking cuts down on carbon emissions. It’s good for you, and good for the planet. “With rising gas prices, we have two routes: [We can] continue to rely on nonrenewable fossil fuels, or we can change the system by addressing transportation at the root. Diversifying the way in which we travel will strengthen community resilience by providing cleaner and safer transit ways.” INSPIRATION Community Design Group, of Minneapolis, an urban-planning firm that advocates for bike transit FIND OUT MORE ADVICE Reduce and reuse, rather than recycle. WHY? Recycling uses energy. Plastic, aluminum, cardboard, and other recycled materials have to be broken down before they can be repurposed. “Take the challenge of looking into the depths of your closet and removing those dusty sweaters you haven’t worn since junior high. Give [them] a second life with a redesign or hand [them] off to your local Goodwill franchise.” INSPIRATION Elui Hernandez, of Denver, who turns worn-out jeans into purses and clutches FIND OUT MORE