A Greener Way to Go: Eva Moseley ’53 and Green Burial 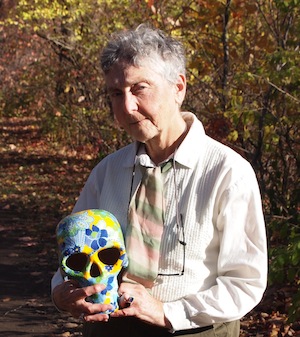 Eva Moseley ’53 spoke to an audience of alumnae at Reunion 2013.

Did you know that formaldehyde, the main chemical used in embalming, is a carcinogen? Or that embalming usually isn’t required by law? And those outrageously priced coffins that are sold to grieving family? Not necessary at all.

Death isn’t anybody’s favorite topic of conversation, but Eva Steiner Moseley ‘53 isn’t afraid to talk about it. On the contrary, she has been working to get the word out about a growing trend in eco-friendly funerals: the green burial.

As part of the “Back to Class” segment of reunion, Moseley gave a talk about green burials and their economic, environmental, and even emotional benefits. In the talk, Moseley referred to Jessica Mitford’s 1963 book The American Way of Death, an exposé of the funeral industry that prompted many to rethink the way our culture treats death. “For me,” Moseley says, “the main thing is becoming part of the Earth, an idea as satisfying, intellectually and emotionally, as thoughts of death can be.”

When Moseley’s mother died in 1971, she experienced firsthand the business of the funeral industry in America. There were no simple or natural options, and when Moseley asked for the plainest wooden casket shown to her, she was told that it was only available to orthodox Jews. “That plain wooden box started me thinking about what I want,” said Moseley.

In a green cemetery, simplicity is the top priority. Everything is biodegradable. No elaborate headstones, no concrete vaults, no toxic chemicals. Even the flowers are native to the land. As Moseley puts it, “A field of graves is a field.”

Cremation is not on the green burial agenda. Though often thought of as a better alternative to burial, cremation adds to global warming and pollutes the air with mercury, says Moseley. Her main argument is that cremation is wasteful. “Put simply, plants feed animals, and animals, with their wastes and their bodies, feed plants,” she says.

5 responses to “A Greener Way to Go: Eva Moseley ’53 and Green Burial”