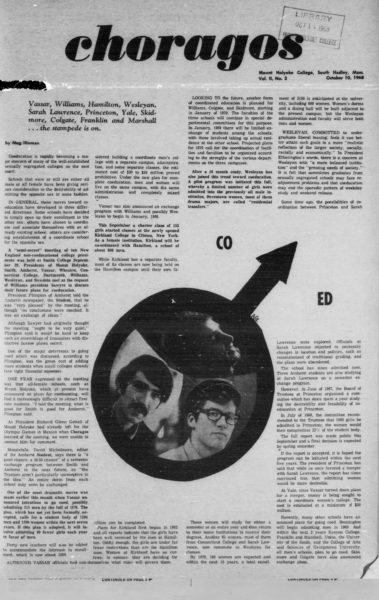 After 50 years of publication, the 51st editorial board of the Mount Holyoke student newspaper made the decision to change its name from Mount Holyoke News to choragos. They felt the newspaper was not meeting the needs of students and that its tradition had ceased being meaningful or relevant for students. The March 1, 1968, issue set forth a new path for the newspaper.

“Quite simply, we are changing from passive reporters to active initiators of change with the goal of improvement. We no longer view our role solely as a mere commentator, a transmitter of information about what is already happening here. Rather, we see ourselves in a leader’s position, as an active force, an innovator. We will be talking about what could, and perhaps should, be happening here. Thus the name News, with its connotations of reporting only what is already being done by others, has become ill-fitted to our purposes. Choragos, the leader of the chorus in Greek drama, the one who asks questions and provokes discussion, is more in keeping with our new self-image.” 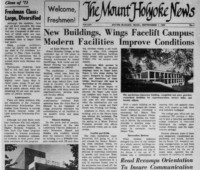 See past issues of the student newspaper.
Web exclusive 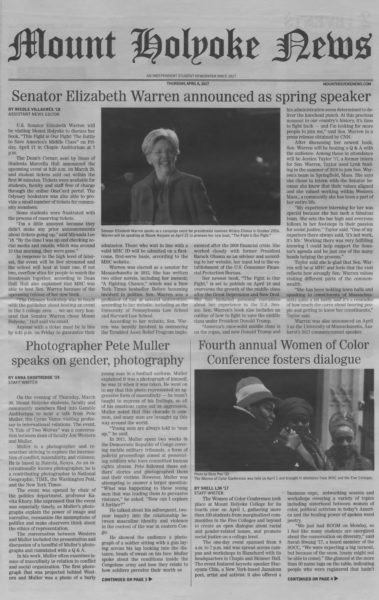 For more than 35 years the student newspaper has been published as Mount Holyoke News, after the 66th editorial board made the switch in the February 17, 1983, issue.

“Our name change stems not so much from philosophical reasons, but practical ones. We are a newspaper, and should identify ourselves as such. The change back to Mount Holyoke News reflects this. The name choragos, though aesthetically appealing, sounds too much like a literary magazine. As the College’s main vehicle of communication and expression of opinion, our name must reflect our role. In this role, we will actively report news, raise questions, and propose answers; the role of any good newspaper. We hope to evoke response and initiate change. By our name change we mean not to revoke the ideal of an effective newspaper, but by overturning a 12-year-old [sic] tradition and reinstating a 51-year-old one, to better state and assert our purpose in the College community.”

This article appeared as “Student Newspaper” in the spring 2019 issue of the Alumnae Quarterly.

One response to “Then and Now: Mount Holyoke’s student newspaper”