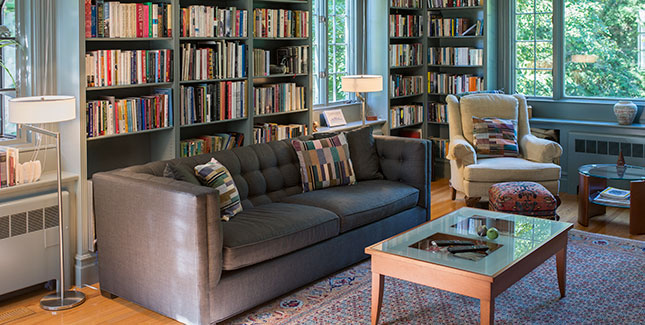 Tucked away on the western edge of campus behind Pearsons Hall sits the house where the past eight Mount Holyoke presidents have lived. The pale yellow three-story stucco home was commissioned by the College’s eleventh president, Mary Woolley, designed by Horace Frazer of Boston, and built in 1908.

Next to the library is a wide living room with an enormous fireplace. Under the front window—one of many that features the original leaded glass—sits a baby grand piano, often played by guests during parties. The formal dining room looks more contemporary these days because of Stephens’ inclusion of a long glossy black table and a glimmering row of pendant lights in lieu of a traditional chandelier. 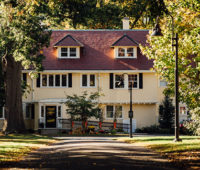 Watch a video taken inside the president’s house.
Web exclusive

Sliding glass doors open to an expansive patio and a tiered backyard. As many as 1,100 people have filled the lush, green space for presentations by speakers, receptions for students and parents, luncheons for faculty and visiting authors, and parties for alumnae.

A grand kitchen is outfitted with two of everything—stoves, refrigerators, dishwashers, and ovens—to help caterers from Willits-Hallowell Center prepare food for guests. College carpenters built the cabinets, and the airy space is much the same as it was when the house was first built.

The front entryway is one of the favorite spots of House Manager Brenda Adams, who has looked after the house for nineteen years. Distinctive William Morris wallpaper with jewel-toned flowers decorates the foyer and runs the length of the white staircase up into the second floor, which is where the family resides.

Hardwood floors throughout the house are adorned with Oriental rugs, and many paintings from the Mount Holyoke College Art Museum have been borrowed to beautify the walls. President Stephens, her husband Jon Triggs, their two teenage sons, and the “first dog,” a brown-and-white cocker spaniel named Cleo who lives for belly rubs, moved in over the summer.

One response to “Insider’s View: The President’s House”