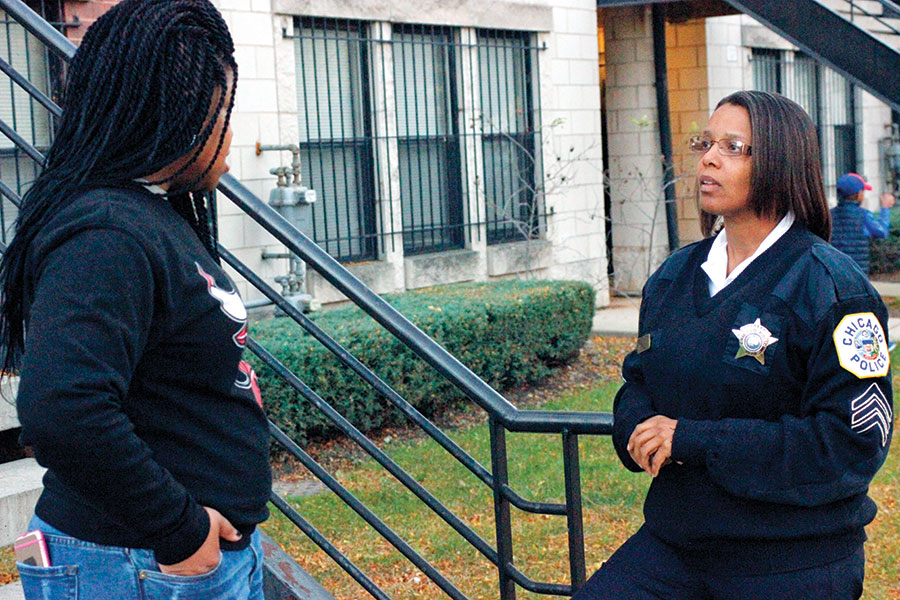 You majored in politics at Mount Holyoke. Did you know you wanted to be a police officer or public servant back then?

Not at all. When I was really young I wanted to be either a pediatrician, a child psychologist, or some sort of children’s doctor. But when I got to high school, I took my first science class and discovered that I was really bad at science. When I got to Mount Holyoke I found out that I was not that great at psychology. So I figured I probably needed to re-evaluate a future in the medical field.

I started thinking this was a perfect way to have a more active role in public service, and it gave me an opportunity to shift my focus toward helping people who had been victims of crime.

How did you end up in the Chicago Police Department?

I met a friend at Loyola [where I attended their criminal justice graduate program] who was a Chicago police officer. She encouraged me to apply. I was surprised because it really was not on my radar as a career. I was studying law enforcement as part of the criminal justice program at Loyola, and I was still interested in the criminal justice system, however, I didn’t see myself as a police officer. But I started thinking this was a perfect way to have a more active role in public service, and it gave me an opportunity to shift my focus towards helping people who had been victims of crime.

At that point, I looked into working for the FBI. But I found out that there was no guarantee that I would be able to work in Chicago. I wanted stay close to my family, so I submitted my application to the Chicago Police Department (CPD) and was accepted into the Police Academy.

When did you become interested in working for the CPD Special Victims (SVU) unit?

Not until the opportunity presented itself to me. I was working as a sergeant in the Bureau of Patrol when I was asked if I wanted to supervise detectives in the Special Victims Unit, which is a completely separate bureau, the Bureau of Detectives. I had never thought about working in SVU, because I knew that many of the sergeants in the Bureau of Detectives had actually worked as detectives before they were promoted to sergeant. Since I was never a detective, I was very surprised when I was asked to supervise in SVU. But after meeting with the commander and getting an understanding of what he expected, I knew I could meet those expectations. Shortly thereafter I started working in SVU. That was in 2009.

Is it anything like the TV show “Law & Order SVU,” or is that a totally unrealistic portrayal?

I get that question a lot. On a very basic level, some things are similar. But remember, the TV show is based on NYPD, which is different from CPD. Consequently, some of what you see on the TV show is nothing like our SVU. For example, my detectives do not handle sex abuse cases involving children. We have a special unit that handles those cases that is separate from our SVU.

Although there have been one or two cases on the show that I recognized as being Chicago cases, the details and certain information surrounding the cases were made up, and that could be for a number of reasons. So, when they say their stories are ripped from the headlines, that may be true, but in some cases characters may be fictionalized or information may be completely made up for effect or for simplicity.

How did Mount Holyoke shape what you do today?

I was very fortunate to have attended Mount Holyoke College. When I started in 1987, Laura Rice ’90, who was also from Chicago, was assigned as my Big Sister. She and other women such as Sonya Greaves-Ponder ’89, Debra Hunter ’90, Asha Mehrling Tall ’90, and Tala Davis ’90 really looked out for my well-being and showed me what it meant to be a competent Mount Holyoke woman.

I take pride in being a person with independent thoughts and opinions who is not afraid to express myself.

It wasn’t necessarily a formal support system, but these were women who let me [and other younger students] know that they were there for us if we needed someone to talk to, and, more importantly, they also let us know that if they saw something going on with us that didn’t appear quite right, they were going to address it. And they did. At the time, I saw them all as big sisters. But looking back, they were also mentors because that support system taught me the value of helping and supporting others.

I take pride in being a competent person with independent thoughts and opinions who is not afraid to express myself. I am extremely comfortable with who I am, and I’m also still driven by my commitment to public service and by my concern for the well-being of others. I think all of that is reflected in my supervisory and management skills on the Chicago Police Department, and I know that my experience at Mount Holyoke has a lot to do with that.