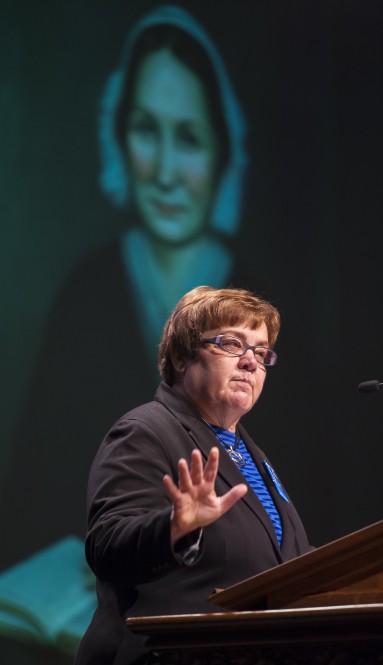 Late in the fall when I leave campus after dark, I often pass the College gates and the library all lit up and I think about the women who lived on this spot a century or more ago. In my reverie, I see the big, four story-seminary building, take the roof off, and look inside.

It doesn’t take long before I think about Emily Dickinson. It always astounds me that for one singular year—1847 to 1848—the great American poet and the great pioneer of women’s education lived together in that building. They passed each other in the hallways. They studied together. They ate the same roast veal and squash.

In many ways, the two women could not have been more different.

Mary Lyon had just turned fifty. She had two years left to live. Raised in rural Buckland, Massachusetts, she stayed on the family farm after her father died, and her mother remarried and moved—an act of independence that would define her life. Mary Lyon grabbed knowledge by the handfuls, a friend said, and nearly every letter students wrote home mentioned her. One young woman described Miss Lyon as “a little fat woman” who “don’t look at all like a lady, but she knows enough.”

Emily Dickinson was sixteen when she rode over the Notch to South Hadley. She was well prepared both by her classes at Amherst Academy and by a family tradition of educating women. That year would be the longest she would ever spend away from family and friends: her first taste of independence.

What did she think of the Seminary? “One thing is certain,” Emily Dickinson wrote, “& that is, that Miss Lyon & all the teachers, seem to consult our comfort & happiness in everything they do & you know that is pleasant…on the whole, there is an ease & grace a desire to make one another happy, which delights & at the same time, surprises me very much.”

If we take a broad view of Mount Holyoke during that year, we see a posture that I believe influenced the young poet. Mary Lyon believed women were capable of learning for themselves.

Take the study of science. Lyon was one of the pioneers in using laboratory experiments in the classroom. Instead of learning by memorizing a text, she threw young women into the lab, where they would tackle problems, take chances, make mistakes, try again, confront the unknown, and rely on their own intellect to make sense of the world.

Above my desk I have a copy of one of Dickinson’s manuscripts. The page is line after line after line of poetry— all of them crossed out. It’s a lab report, really, full of trial and error, a poet’s search for the right amalgam of rhythm and rhyme.

If you examine that first decade, one image of Mary Lyon surfaces: a woman in a hurry. Elizabeth Hall in 1848 wrote, “I wish you could see Miss Lyon. I know you would laugh, she is 52 years old, hard of hearing, has false teeth, wears a cap and dresses as well as an old wash woman, yet she is noble, for doing business. She runs around here with her nose dripping and does more business than any two men.”

This woman in a hurry—some would say obsessed with getting work done—was a commanding image for Emily Dickinson. She had never seen a woman like her: a rough-hewn, tireless, focused, independent woman who—against enormous odds—was taking on the world.

It was not so much hurry that students like Emily Dickinson witnessed: it was urgency. Mary Lyon acutely felt that her ambition might not be realized.

What Lyon taught Emily Dickinson was that women had a right to think, to dream big dreams, to move against the grain, to do great work, and to change the world one stunning metaphor at a time.

Later, as Emily Dickinson began writing poems, Mary Lyon’s example may not have been far from her mind. Writing to her cousin Louisa, the poet asked— do you remember “the October morning when our families went out driving, and you and I in the diningroom decided to be distinguished? It’s a great thing to be ‘great,’ Loo.”

It seems appropriate that Mary Lyon opened the doors to Mount Holyoke in November. At this time of year we recognize the days are short. There’s urgency in the nip of the season.

Do me a favor.

When you leave this hall, walk past the College gates near the spot of the old Seminary. Imagine what the beginning was like. Think about those women in a hurry, the ones who crossed out all the lines and began again, the ones who believed their minds could find the answers, their hearts could choose for themselves.

And maybe we’ll see this place anew: all lit up against the old mountains like a beacon in the dark.

This essay was excerpted from Ackmann’s Founder’s Day talk. Hear the entire talk.

One response to “Lessons in Independence: Mary Lyon and Emily Dickinson at Mount Holyoke”