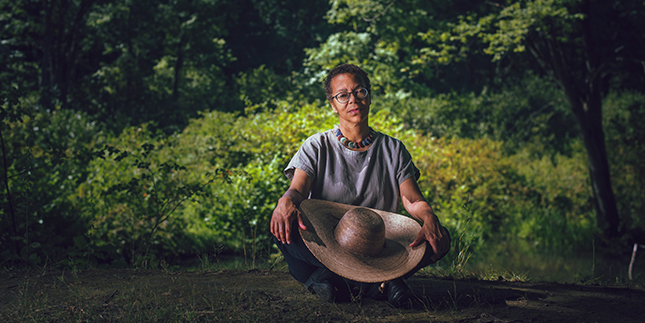 A teacher, earth scientist, writer, photographer, and pilot, Professor Lauret Savoy is also a woman of mixed African-American, Euro-American, and Native American heritage. As David B. Truman Professor of Environmental Studies, her courses explore the stories we tell of the American land’s origins—and the stories we tell of ourselves in this land. In each course, Savoy challenges students to examine their assumptions about the world and about history. In 2003, she was a recipient of the College’s Distinguished Teaching Award. She has also been chosen by senior classes as a Baccalaureate speaker and Last Lecturer.

Savoy has worked extremely closely with her students through the years, passionately encouraging their initiatives and even inviting them to collaborate with her. Last fall she delivered the keynote address at a ceremony where her former student Aileen Suzara ’06 was presented with the Thomas I. Yamashita Prize—given to an outstanding young social change activist/scholar whose work transforms the existing social landscape and serves as a bridge between the academy and the community. “Aileen has been doing this,” Savoy said, “since we worked together at Mount Holyoke College as student and teacher, as teacher and student. To be in such relation is never one way—it’s always an exchange.”

Savoy was presented with the American Book Award from the Before Columbus Foundation in San Francisco on October 30, 2016, for Trace: Memory, History, Race, and the American Landscape, which explores ancestral, cultural, archeological, and personal history while demonstrating how both a person and a terrain become marked by experiences. At the ceremony Savoy joined the ranks of impressive past recipients, including Toni Morrison, Quincy Troupe, Leslie Marmon Silko, Louise Erdrich, and Jamaica Kincaid.

Trace has been short-listed for numerous other awards, and was a finalist for the PEN Open Book Award. Since its publication, the book has been critically acclaimed and positively reviewed in many venues.

This spring Savoy received a a prestigious Andrew Carnegie Fellowship to expand her research into the racialized history of humanity through the geological and physical traces it has left on the earth. “The Andrew Carnegie fellowship further celebrates Lauret Savoy’s distinctive contribution to scholarship and to our understanding of the importance of place,” said Acting President Sonya Stephens. “We have long known Lauret to be among our most creative thinkers; this award cements her reputation as such, and promotes her work as both highly original and deeply significant.”

Listen to an interview with Lauret Savoy at Kenyon Review