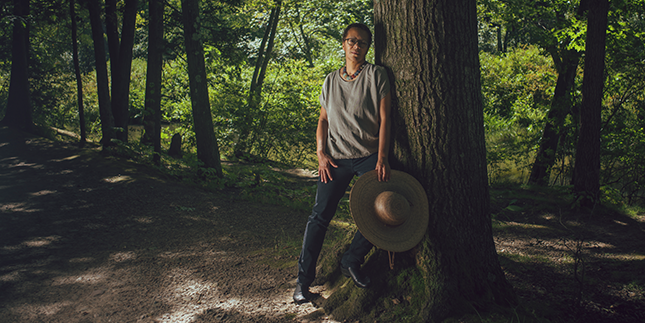 Professor Lauret Savoy in the woods near Upper Lake on the Mount Holyoke campus.

Supported by a Carnegie Fellowship, Professor Lauret Savoy Digs into the Essential Questions of Her—and Our—American Past

David B. Truman Professor of Environmental Studies Lauret Savoy approaches air travel like a baseball enthusiast who records the minutiae of each inning on a scorecard. And while she loves the American pastime almost enough to have that scorecard on hand, it’s the American landscape that is her truest passion.

“On every flight I take across country,” she says, “I bring along the large hand-drawn map Landforms of the United States by the master cartographer-artist Erwin Raisz. This map emphasizes the lay of the land, from mountain summits to sinuous river courses. If the ground is visible on cross-country flights, I can follow our course, even over the plains. Of course, I always try to get a window seat not over the wing.”

Savoy’s fascination with American landforms is intimately connected with her work as a scholar, studying and writing about the ways that American geography, geology, and earth processes are interwoven with race, culture, history, and personal experience.

“I’ve always been drawn to the stories we tell of the American land’s origins and the stories we tell of ourselves in this land,” Savoy says. “Reading the land and interpreting, from rock and fossil clues, plausible histories of ancient environments [formed the basis for] some of my earlier work and teaching.” 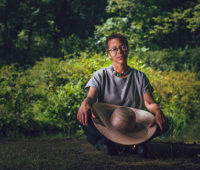 More recently Savoy’s work has focused on the intersection of race and the American landscape and the ways the two have interacted and left marks on each other over time. Her first book exploring this topic is Trace: Memory, History, Race, and the American Landscape (Counterpoint Press, 2015), winner of an American Book Award in 2016. (Read her acceptance remarks.) She has already begun work on a second book project with the working title “On The River’s Back: Seeing Roots of an ‘American Dilemma’ in a History of Landscape and Mixed Heritage in the Chesapeake Tidewater and Piedmont.” This past spring, she was awarded a prestigious Andrew Carnegie Fellowship to continue and expand her research.

“Our dean of faculty, Jon Western, surprised me last fall when he told me that he wanted to nominate me for the Carnegie Fellowship,” Savoy says. “Though very honored, I honestly thought I was an unrealistic long shot at best. I’m still pinching myself.”

“Professor Savoy is an outstanding scholar, a gifted teacher, and a wonderful storyteller,” says Western, who also serves as the College’s vice president for academic affairs. “She has a rare gift to make her research and writing accessible to a broad and diverse audience—something that is particularly important at this moment in history. . . . We are excited that the research supported by the Carnegie Corporation will culminate in a book that will continue these themes and stimulate more conversations among readers and the broader public.”

Though very honored, I honestly thought I was an unrealistic long shot at best. I’m still pinching myself.Lauret Savoy

Savoy’s curiosity about her place in the landscape was sparked when she was a young girl. In Trace, she recounts a visit to the Grand Canyon with her parents when she was seven. Standing at the edge of that vast geological record of the passage of time, she experienced a kind of awakening.

“Those moments at Point Sublime illuminated a journey of and to perception, another way of measuring a world I was part of yet leaving behind,” she writes. “I felt no ‘troubled sense of immensity’ but wonder—at the dance of light on rock, at ravens and white-throated swifts untethered from Earth, at a serenity unbroken.”

Savoy would come to learn, however, that the country that so enchanted her with its beauty was also one in which grave and ugly injustices were still very much alive. An encounter with a contemptuous shop owner on that same trip to the Grand Canyon, a second-grade classmate cruelly spitting the word “colored” at her, and a fifth-grade textbook that suggested Africans were well-suited to being slaves were among the formative experiences that complicated Savoy’s vision of America and raised inescapable questions about her place in it.

“Trace began in my struggle to answer, or at least face, questions that haunted me since childhood—about origins, about my place in the world,” Savoy says. “I write in the book that sand and stone are Earth’s memory. Yet each of us is also a landscape inscribed by memory and by loss. My ancestors include free and enslaved Africans from the colonial period, as well as colonists from Europe and tribal peoples indigenous to this land. But I knew little of them or how their paths converged to my present. Even though, as an Earth historian, I can track the continent’s deep past from rocks and fossils, the traces of a familial past seemed eroded and lost.”

Savoy’s familial past, to which she devoted the final chapter of Trace, would become the subject of her next project, “On The River’s Back,” and the catalyst for her Carnegie Fellowship. Though she had already begun work on the project, the support from the Carnegie Corporation allowed her to immediately delve into her research. 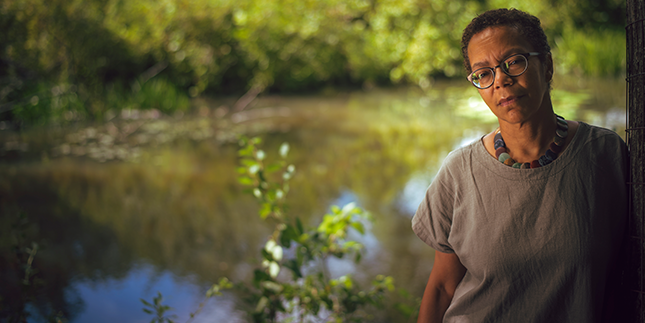 According to her proposal, “On The River’s Back” will build on the last chapter of Trace to explore the environmental history of the landscapes around the nation’s capital “through the lens of an African American family of mixed European and indigenous heritage and its ties to place from the colonial era onward.”

The family in question is Savoy’s family, but her inquiry is far broader. In her Carnegie proposal, she described the ways in which the project will illuminate long-neglected narratives by “placing the history of one family whose bloodlines originated on three continents within the context of an environmental history of the place where these lines converged.”

The project—the basis of a new book—will address the Chesapeake environment and human interactions with it, including tobacco agriculture and its demise; the role of free and enslaved African Americans in the origin of the capital city; free Blacks as “slaveholders” and landholders; free African Americans and the Underground Railroad; and the continuing impact of this history on contemporary life, culture, and ideas about race. The exploration, Savoy writes, will be “framed by the geologic and geographic setting—the lay of the land, deep tidewater rivers, the soils and their exhaustion.” Through her work, she hopes to build a kind of bulwark for social consciousness and against unknowing: “Placing even fragments of familial stories into historical and environmental contexts gives breath to statistics and helps us understand more fully the fragility of democracy.”

Framing those contexts will be a critical part of the project, and Savoy is grateful to have helping hands. Mount Holyoke students with majors in environmental studies, history, and geography have assisted in preliminary research by helping to gather background information on colonial settlement and land use, slavery laws in Virginia and Maryland, and perceptions of Chesapeake landscapes. As the project progresses, students will focus on documenting demographic shifts in free African American populations as well as landscape changes over time.

The students will be paid as research assistants, but they will also have the opportunity to repurpose some of the research in their own academic work.

“I will encourage them to design aspects of the larger study to fit their interests,” Savoy says, “and thus take ownership by becoming authors of independent studies or theses.”

Savoy’s relationships with her students are at the heart of her work, and the integration of teaching, research, and community service is a guiding principle in her pedagogy. For years, she has taught courses in sedimentary and environmental geology and designed field- and project-based courses such as the introductory course Exploring the Dynamic Earth.

Her recent courses have both supported and grown from her writing and research interests, and they reflect her interdisciplinary approach. These include Perspectives on American Environmental History (which was cross-listed with geography, history, and American studies), Evolution of North American Landscapes (cross-listed with geography), and Reading and Writing in the World, which she co-taught with now-retired Professor of English John Lemly. She regularly mentors undergraduates as they carry out independent research projects and was honored to receive the College’s Distinguished Teaching Award in 2003.

Through her teaching, Savoy says, she challenges students to examine their assumptions about the world, and she treasures the reciprocity of learning that takes place.

“Mount Holyoke students have taught me that true exchange between a teacher and student—the back and forth, the give and take—requires living and sharing our ideas, our dreams, our struggles and questions, with open ears, mind, and heart,” she says. “To be in such relation is a great, mutually nourishing gift.”

Savoy is taking the full 2017–2018 academic year for research leave, visiting libraries and repositories including the National Archives and Virginia Historical Society. At Georgetown University she will investigate the ties of the Jesuit order to “slave-holding” and to the lives of the long-ago ancestors she will be studying.

Like Trace, Savoy’s new work will illuminate the often surprising relationships between history, peoples, narratives, and the land —and the ways in which those relationships inform contemporary perspectives. As she wrote in her Carnegie Fellowship proposal, “Above all, ‘On the River’s Back’ trespasses supposed borders to reveal often-unrecognized connections, such as the siting of the nation’s capital and the economic motives of slavery. None of these links is coincidental. Few appear in public history. All touch us today.”

This article appeared as “Lessons of the Landscape” in the fall 2017 issue of the Alumnae Quarterly.