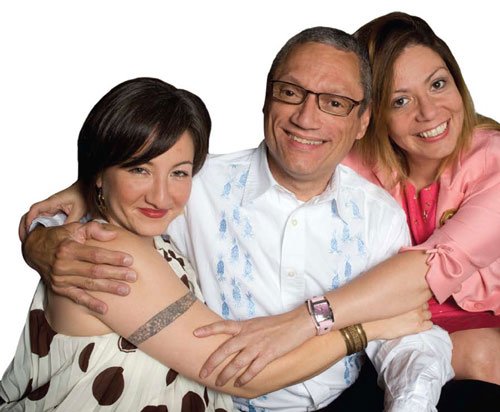 Professor of Spanish Alberto Sandoval-Sánchez remembers his fortieth birthday party in 1994 as a death-taunting celebration. No one present thought the guest of honor, even if he was lucky, would survive until the millennium. He was gaunt to the point of wasting, and suffering advanced AIDS symptoms, including the loss of an eye. “It was a farewell to Alberto. But then, Alberto never died,” recalled Sandoval-Sánchez during a recent interview in his College Street apartment about a mile south of campus. He still refers to the 1990s as “the time I was dead.”

A long-term survivor of AIDS, Sandoval-Sánchez remains a vibrant and active part of academic life both at Mount Holyoke and in his fields of literature, Latina theater, Latino and “queer” identity, and monsters as literary constructs. Sustained by luck, patience, humor, and a powerful will to survive, Sandoval-Sánchez has a support network that is deep in the commitment his friends feel to him, and wide in terms of its sheer size. He cultivates dozens of mutually caring relationships, many of which grew out of his passions as a scholar. His health is now stable, but he is unable to teach courses.

Among those who delight in Sandoval-Sánchez’s presence on the planet is a group of women—many of whom don’t know each other—who identify themselves as “Alberto’s daughters.” They are students he bonded with in the classroom and through La Unidad, a Latina students’ organization he has been involved with as an adviser since he came to Mount Holyoke in 1983.

For some—who were struggling to claim their ethnic identities while mediating tensions between the privileges of an elite liberal arts college and socioeconomic backgrounds that often made them feel out of place—Sandoval-Sánchez was a welcome father figure. A number of students took to calling him “Papi” while getting to know him and his life partner, New York City architect John R. Schwartz, as mentors.

As his health regularly veered into precarious peril during the 1990s, and more recently through the soul-wrenching calamity of Schwartz’s sudden death of a heart attack in 2003, Alberto’s “daughters” rallied around him. They reciprocated his paternal support with filial love. What started as humorous and slightly ironic appellations evolved into profound and durable relationships.

Milagros “Millie” Cruz ’87 (at right in photo), a Hartford immigration attorney, was a first-year student the year Sandoval-Sánchez arrived at Mount Holyoke. He not only turned her on to the golden age of Spanish literature, which became one of Cruz’s majors, but he and Schwartz became her emotional pillars. Toward the end of her first year, Cruz’s brother, a Vietnam veteran and intravenous drug user, contracted AIDS and died.

Cruz remembers sitting at the bar at Woodbridges restaurant and finding Sandoval-Sánchez there. “He would be writing on his napkin, always writing any thought that came into his mind so he could use it later,” said Cruz. “We would chat literature, life, whatever.” As the relationship evolved, Sandoval-Sánchez and then Schwartz “helped mold my thinking and my conduct, not just intellectually but morally as well,” said Cruz, “Alberto and John helped raise me.”

She was “devastated” to learn of Sandoval-Sánchez’s diagnosis during her first year of law school. She knew the expected trajectory of AIDS, having watched her brother’s decline. And she knew what she calls “the intimacy of the illness,” as the patient loses independence. Cruz was there to drive Sandoval-Sánchez to New York, through a blinding snowstorm, on the day Schwartz died, and she stayed with him that week as he adjusted to the most painful trauma of his life.

Cruz is still one of many admirers who monitor Sandoval-Sánchez’s well-being. She calls South Hadley a “wonderful womb” where her teacher gets emotional sustenance from friends and colleagues. But, Cruz adds, “his support network goes beyond just the people who are around him physically … he has a far-reaching spiritual network. We keep him in our prayers, we send him our love, and when he’s not feeling well, we make sure to send him our energy.”

Meredith E. Field FP’96, a nontraditional-age student who is actually nine months older than Sandoval-Sánchez, is also part of the international “Alberto’s daughters” coterie. An analyst with the Center for Disabilities and Development at the University of Iowa, Field became Sandoval-Sánchez’s research and editorial assistant after taking his course on US Latino literature in 1995. “It was a critical class for me,” said Field, “I learned how to read in a different way—he called it ‘reading backwards’ … it was incredibly engaging.”

The next term she wrote “Imagining Alberto,” an article in which she related that from the moment she met him she started to fear losing him. There was a sense “that he was on the edge of a cliff,” said Field. “Once or twice a semester he would become very ill … he was so close to the edge.” Last Christmas they spent two days in Sandoval-Sánchez’s apartment working on a manuscript. “We just went back into writer/editor mode,” said Field. “It was a wonderful reconnecting.”

In addition to essays and plays, Sandoval-Sánchez has published several books since his diagnosis, including José Can You See? (1999), about Latinos on and off Broadway.

Krysia Villón ’96 (at left in photo), Alida Montanez-Salas ’89, Bibi Rahamatulla-Hayakawa ’86, Daniela A. Montecinos-Loubon CG’85, and Marcia R. Webb ’87 are all alumnae who view Sandoval-Sánchez as a fatherly figure. “I think Alberto and I were meant to cross paths and to be part of each other’s lives,” said Hayakawa, a Guyanese-American who is now a paralegal specialist in the major-crimes unit of the US attorney’s office in the Southern District of New York. Villón, a poet who works for the Mount Holyoke Alumnae Association, said Sandoval-Sánchez is one of the few people with whom she shares her works in progress. Villón, whose father is Peruvian, thinks of Sandoval-Sánchez more as an uncle, but she understands the daughter analogy. “There are many generations of us,” she said.

Eric Goldscheider is a freelance writer based in Amherst. This article appeared in the fall 2008 issue of the Alumnae Quarterly.

• José, Can You See?: Latinos On and Off Broadway. (University of Wisconsin Press, 1999)