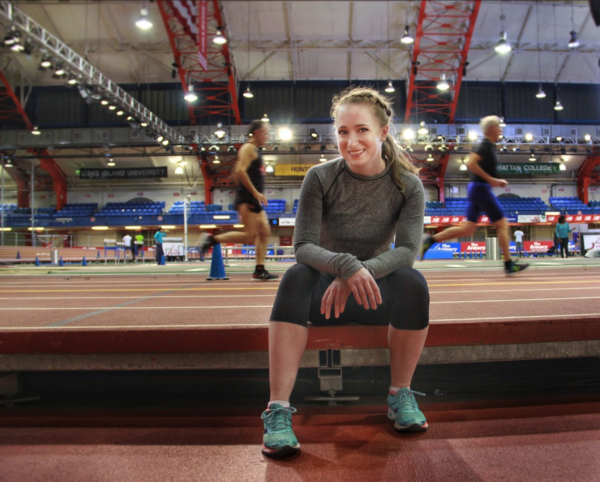 Lynch at The Armory in NYC, where she trains for marathons and triathlons. Photo by Rachelle Clinton

Alison Lynch ’10 has been busy the past eight years. She earned a law degree and then a master’s — in mental disability law — from New York Law School, published in academic journals and established a practice in the Protection and Advocacy for Individuals with Mental Illness programs of Disability Rights New York. She represents people with serious mental illness who live in psychiatric facilities, nursing homes and prisons. She also runs competitively and in the past few years has competed in marathons — including Boston last April — and sprint and Olympic-distance triathlons. Lynch also happens to be legally blind. She was diagnosed at age three with achromatopsia, a recessive retinal disease also known as day blindness that causes drastically reduced vision and gray-scale colorblindness. (Her brother has it, too.)

On achromatopsia:
Early on, my parents noticed I had an aversion to light. I couldn’t identify colors. I could memorize the sky is blue, the grass is green, but I couldn’t answer if someone asked, “What color is this ball?” I underwent an electroretinogram, which measures cone function in the retina — the cones process light and color — and mine showed no cone function. Without sunglasses, my range of vision is about six inches to a foot if it’s bright out.

Achromatopsia isn’t something people are familiar with. Ophthalmologists would tell me I was the first case they’d ever seen, and in school and rec programs, they weren’t sure what to do with me. I tried to play sports, but after getting smacked in the face with one too many soccer balls, I turned to music and theater.

On practicing disability law:
At Mount Holyoke I created a selfdesigned neuroscience and psychology major. One of the few times my parents ever had to tell me something was just not going to happen was when I told them I wanted to be a brain surgeon. So I went to law school instead, and in my first year I met a professor whose focus was mental disability. He had published an article on neuroimaging and its role in criminal justice, which had been the topic of my senior thesis. I worked as a research assistant for him all through law school, as well as for a state organization that represents people in psychiatric hospitals and prisons, and was lucky to find a similar job after graduating. It’s been a nice way to blend things I feel strongly about — mental health and criminal justice issues — in both systemic ways in large class actions all the way down to representing individuals.

On being a competitor:
In 2016 a friend asked me to run a 10K. I was intimidated, but I had a great time. Afterward, she asked if I would be interested in running with an organization for people with disabilities who want to participate in mainstream sports. They paired me with a member of the group’s triathlon team, and at the end of a four-mile run — I was just trying to keep pace and not embarrass myself — he invited me to their weekend triathlon training camp. I didn’t know how to swim well, I hadn’t been on a bike in years, and I’d been running for only about one month. But after that weekend I signed up for the New York City triathlon, with six weeks to train! I placed third in the female paratriathlon category. Last July I came in second.

On what’s next:
I’ve run five marathons, and I’m running my second half-Ironman in Chattanooga in May. Though I’d love to run an ultramarathon and a full Ironman, with my work schedule right now, I don’t have time to train for the performance I’d like. If I’m going to do it, I want to do it well.

This article appeared as “Hitting Her Stride” in the winter 2019 Alumnae Quarterly.