MoHome Memories: Beneath the Full Moon 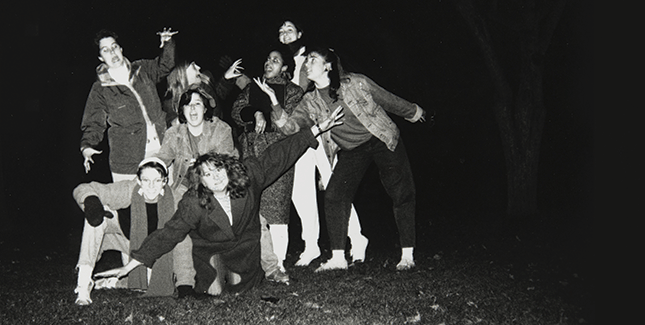 In the early days of each fall semester campus security often receives a worried call from a first-year student about the sudden howling emanating from Gettell Amphitheater. Not to worry, the dispatcher will say, reassuring a new Mount Holyoke student that she is in no danger of a wolf attack—the high-pitched cacophony is just Mount Holyoke’s Lunar Howling Society letting off steam.

Founded by two students in 1988, the Society still meets monthly to howl and bay at the full moon for ten to fifteen minutes in honor of their lupine brethren. Open to anyone, attendance of the howlings climbs steadily as finals near, with sometimes more than one hundred students releasing a sort of primal scream to the heavens.

Through the years, the Lunar Howling Society hasn’t just been about stress relief. The organization has also raised money for real wolves and at one point discussed “adopting” a wolf in Alaska. T-shirt sales have raised money to be donated to the Defenders of Wildlife’s Save the Wolves program.

The Society has also garnered the attention of the media, having been the subject of newspaper articles in the Daily Hampshire Gazette (1995) and even the New York Times (1989). And one windy day in December 1990 filmmakers for Tokyo-based Nippon TV documented the lunar howlers’ ritual atop Mount Tom for the popular Japanese program Show by Shobai, which reached more than sixty million viewers, far more people than even the loudest—and most academically stressed—Mount Holyoke student howlers could reach on their own.

2 responses to “MoHome Memories: Beneath the Full Moon”