MoHome Memories: Birth of the Cool 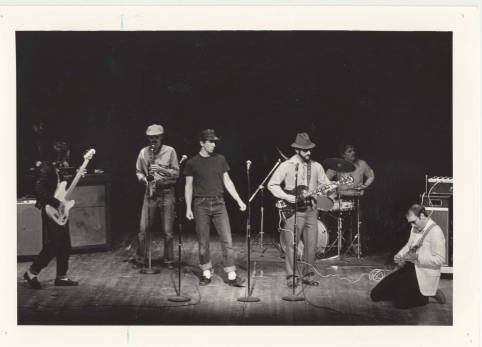 “When you play music, your first obligation is that you can’t be lame,” confesses professor of history Daniel Czitrom. On opening night of the 1984 faculty show, Czitrom and his bandmates were anything but. The show consisted of various professors acting in a series of skits that parodied works from Shakespeare to Hawthorne. No one expected the familiar bass line of the 1950s hit “Pretty Woman” to suddenly echo through the hall. Cheers and screams rang out as the lights flashed and seven faculty members stood on stage with electric guitars, keyboards, and drums.

When you play music, your first obligation is that you can’t be lame.

“The Faculty Band,” as they were known, included Steve Berrien (English), Lee Bowie (philosophy), Vincent Ferraro (politics), Douglas Amy (politics), Jonathan Lipman (Asian studies and history), Robert Schwartz (history), and Daniel Czitrom (history). With each song, the young professors pulled out stunt after stunt—and the students couldn’t get enough. During their rendition of Del Shannon’s “Runaway,” front-man Czitrom, clad in a white suit and sunglasses, went down to his knees while fiercely playing the guitar. After a choreographed rendition of “In the Still of the Night,” the audience began chanting Ferraro’s name. One last “Yo, Vinnie!” provoked him. Like any good rock star, Ferraro gave the crowd what they wanted and bared his naked chest. Uproar ensued.

By the second night’s performance, word had spread on campus, and the auditorium was packed. Mid-set, a group of disguised young women sprinted to the stage and threw various pieces of undergarments at the feet of the new legends. “Seeing people running down the aisles with paper bags on their heads,” recalls Amy, “we just were wondering, ‘What is this?’” The bra-throwing groupies were never publicly identified, but the faculty show of ’84 went down as one of the most (in)famous productions in MHC history.

3 responses to “MoHome Memories: Birth of the Cool”