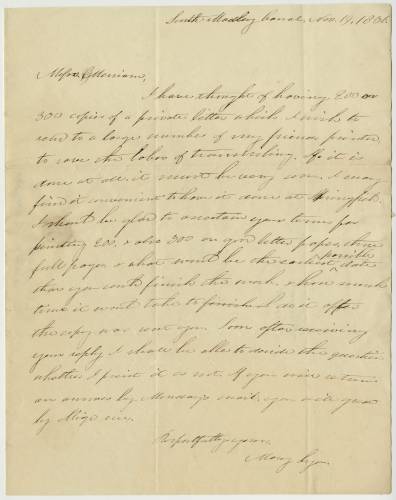 A newly discovered business letter written by Mary Lyon in 1836 was just purchased by the College. Leslie Fields, director of  Archives and Special Collections, says it’s the first time in a decade a Mary Lyon letter was known to be for sale.

Although written in an elegant hand full of curlicues, the letter’s contents are mundane. In it, Lyon asks the cost of printing 200 or 300 copies of a private letter and inquires how long it would take to do the job.  The letter’s backstory, though, shows its true significance.

Fields reports that Mary Lyon did have the private letter printed, for the equivalent of around $200 in 2012 dollars. She sent the letter “especially to women in order to raise additional funds for and, most importantly, to solicit furnishings for, the Mount Holyoke Female Seminary. “In all our progress,” Lyon writes in that three-page letter asking for assistance, “ladies have been prompt to do all that we have asked.” She explains the Seminary’s purpose (“the raising up of female teachers”) and requests recipients to gather donations so that each town or parish contributes $50 or $60 each, the cost of furnishing one student room. Lyon also shares her dream of a “New England to be filled with such teachers for fifty years to come,” adding, “Had I a thousand lives, I could sacrifice them all in suffering and hardship for [the Seminary’s] sake.”

Even the recipients of Lyon’s business letter provide an intriguing historical note.  The addressees were Charles and George Merriam of Springfield, Massachusetts, the brothers who would later publish the famed Merriam-Webster dictionary.

Fields called Lyon’s letter “a wonderful addition to the College’s Mary Lyon Collection and a thrilling find in this 175th anniversary year!”

Read the fundraising letter from Mary Lyon here (zoom in to see it clearly). 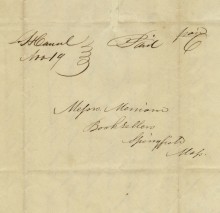