What Would Mary Lyon Say?

Many and varied voices have claimed to speak for Mount Holyoke’s founder. 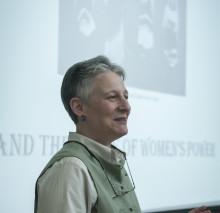 “Good morning, young ladies!” At the sound of those words “in a tone so like Miss Lyon’s,” the assembled daughters of Mount Holyoke rose in unison “with great enthusiasm.” It was 1887 and the alumnae of Mount Holyoke Female Seminary were gathered to celebrate the semicentennial of their alma mater’s founding. Eunice Caldwell Cowles, the Seminary’s first associate principal, had begged her audience’s indulgence before delivering the greeting: “Will you allow me,” she asked, referring to the dear companion of her youth, to serve “as her mouthpiece?” Cowles went on to speak for Mary Lyon on matters of religion, women’s leadership, and the importance of not deferring to the rich: welcome them and treat them well, but “don’t act as if you felt below them or above them.” What would Mary Lyon say to the idea of raising a fund to keep costs down? By all means, do it! Would Mary Lyon object to changing a part of the school’s name from Female Seminary to College? She would not, but if you do, then “be sure and have it a college.” Before and since, others have taken the liberty to serve as Mary Lyon’s mouthpiece. In 1862, at the Seminary’s twenty-fifth anniversary, male ministers spoke for her. They lauded and even envied the late educator’s skill as a preacher and considered that in her case, at least, there need be no controversy over a woman in the pulpit, for “Here was a pastor, on a salary of two hundred dollars…preaching five sermons a week, bringing…the Word of God, directly to affect every mind and heart.” High praise, indeed, but then, she was dead, and dead, self-denying Christian women had a special kind of power in the mouths of nineteenth-century American ministers.

From the range of such voices over the years, there emerges a veritable parade of Mary Lyons: the pious Christian, the frugal domestic head, the science educator, the progressive, the defender of universal human values, the volunteer for social justice, the conservative revolutionary, the feminist.

The seminary became a college shortly after Eunice Cowles’s loving impersonation; within a decade the College burned to the ground; and in 1891 President Mead instituted Founder’s Day. All provided occasions for the representatives of Mary Lyon’s legacy to speak in her name. From the range of such voices over the years, there emerges a veritable parade of Mary Lyons: the pious Christian, the frugal domestic head, the science educator, the progressive, the defender of universal human values, the volunteer for social justice, the conservative revolutionary, the feminist. To President Mary Woolley, in 1905, she was a “radical democrat”; to Woolley’s peace-movement friends in 1937, the year it was decided to put a man at Mount Holyoke’s helm upon Woolley’s retirement, Mary Lyon was an exemplar of women’s leadership, whose strength was captured in her comment on the College’s biblical motto (“That our daughters may be as cornerstones polished after the similitude of a palace”): “You cannot polish a piece of sponge, but you can polish a piece of steel.” A mere five years later, the pacifist’s choice metaphor materialized ironically in the christening of a liberty ship, the U.S.S. Mary Lyon. By 1997, a liberated Miss Lyon, with imaginary bloomers showing beneath the raised hem of her skirt, ran a “Marython” to support public education. There were words Mount Holyoke’s founder spoke that have less often, if ever, found their way into the mouths of latter-day Mary Lyons and champions of her legacy. Among these: her derogatory views of Irish immigrant servant girls whom the Seminary was able to exclude from its “household” thanks to a plan for students and teachers to cooperate in carrying out their own domestic labor; words to encourage full assimilation to Anglo-Saxon New England norms, spoken to a student body that included two Cherokee sisters who attended Mount Holyoke in the 1840s; words of remonstrance heard by the young abolitionist Lucy Stone, then a Seminary student, who placed unauthorized anti-slavery literature in the reading room; and Mary Lyon’s response, now lost to us, it seems, to another abolitionist plea to foster benevolence not only for those in distant lands, but also for those women suffering at the hands of American slave masters. These unrepeated words mark the limits of the program Mary Lyon was ready to fashion for Mount Holyoke. More able to imagine sending New England daughters to distant lands than to contemplate working on behalf of poor, immigrant, or African American women nearer by, she could not yet imagine the wider range of experiences, perspectives, and cultures that would come to animate the College and shape the work of its alumnae in struggles for justice in her own country as well as in the far corners of the continent and the world. What would Mary Lyon say? “Improve!” She could not have predicted the ways her beloved household would take that admonition to heart. And we are, by necessity, still at it.

—By Mary A. Renda

Mary A. Renda is an associate professor of history at Mount Holyoke College. This article appeared in the fall 2012 issue of the Alumnae Quarterly. 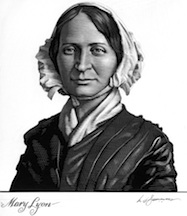 Born in Buckland, Massachusetts, Mary Lyon was five years old when her father died and thirteen when her mother remarried and moved from the family home, taking some of her siblings, but leaving Mary to serve as housekeeper to her older brother, Aaron. With a small inheritance, a weekly wage paid by Aaron, and additional sums earned by teaching, sewing, and weaving, at twenty-one Mary Lyon made her way to Byfield, Massachusetts, to study under Joseph Emerson, an advocate for women’s education. There she met Zilpah Grant, with whom she subsequently taught in nearby Derry and Ipswich, and who became her beloved confidante and lifelong friend. While teaching at Grant’s Ipswich Female Seminary, she conceived a plan to found a new kind of school. Many women opened schools for young ladies, but they tended to exist only as long as that particular teacher taught. Mary Lyon envisioned a permanent institution with the highest educational standards, comparable to a college for men, available to the daughters of families of modest means. Lyon enlisted the support of ministers and other influential men, but she turned, too, to women to contribute what they could and thus to stand behind the enterprise. She drew public censure for going house to house, talking with men and women to raise funds for the school, but she understood her endeavor to be ordained by God. “I am doing great work,” she said, “I can not come down.”

One response to “What Would Mary Lyon Say?”