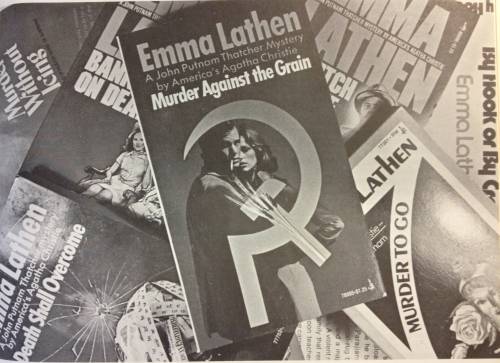 Some of the books published by Mary Jane Latsis and Martha Henissart ’50, writing as “Emma Lathen.”

Back in the day, murder-mystery writers didn’t get much bigger than Emma Lathen. Between 1961 and 1997 the pseudonymous Lathen published twenty-four novels featuring Wall Street banker-detective John Putnam Thatcher. Lathen’s books won awards named after such great mystery writers as Edgar Allan Poe and Agatha Christie; one, Murder Against the Grain, received the 1967 Gold Dagger for best crime novel from the Crime Writers’ Association. At the height of Lathen’s popularity, in the 1960s and ’70s, the English novelist C. P. Snow, writing in the Financial Times of London, called her “probably the best living writer of American detective novels.”

Lathen’s true identity was itself a mystery until 1977, when Forbes magazine revealed that the pen name belonged to not one but two women: the writing team of Wellesley alumna Mary Jane Latsis and Mount Holyoke’s own Martha Henissart ’50. Henissart, a lawyer, and Latsis, an economist, met in graduate school at Harvard, where they discovered a shared obsession with detective fiction. Eventually, they formed a writing partnership. In addition to the financial mysteries, their collaboration yielded a second series of nine political whodunits written under “R. B. Dominic.” When Latsis died in 1997, the Lathen and Dominic names were retired forever.

In a phone conversation from her Needham, Massachusetts, home, Henissart said mystery writing came to replace the practice of law as her full-time job. “It certainly suited my purposes,” she said. “It led to a very comfortable life, and an interesting one.” These days, she occupies herself with travel, gardening, duplicate bridge, and the duties of dog ownership. She still enjoys reading mysteries; but asked whether she herself has written anything since Latsis’s death fifteen years ago, Henissart said, “Not a word.” She paused, then added, laughing, “Occasionally I see something interesting and think it’d make a book, but then I come to my senses.”—By Christina Barber-Just

One response to “Martha Henissart ’50: Anonymous No More”