On the Road in China with Hope Justman ’64

A Chinese art history class taken in 1962 at Mount Holyoke changed the life of Hope Justman ’64. She fell in love with Chinese landscape painting, especially the masterpiece Emperor Ming Huang’s Journey to Shu. In the background was an ancient plank road clinging so precariously to sheer mountain cliffs as to seem more imaginary than real. Justman remembers wishing she could walk that road and follow wherever it led.

Thirty-seven years passed before she actually did this. Her interest in Chinese painting led to graduate studies in Chinese history, literature, and language. Unable to find a China-related teaching job, she became a court stenographer.

Justman first traveled to China in 1996. By then she had started a landscaping business, spending the spring and summer mowing lawns and listening to Mandarin Chinese instructional tapes via headphones. When the weather began to cool and work slowed, Justman left her Philadelphia home and spent the winter in China. As Gail Humphries ’64 says, “Hope can’t stay away. She’s magnetically drawn to these people and the adventure of her life.” 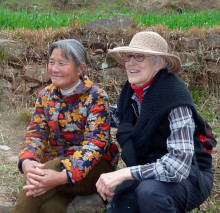 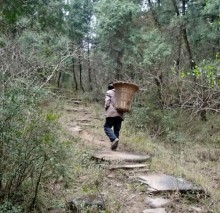 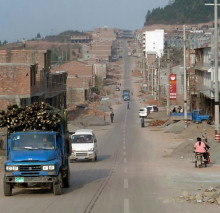 Paved roads have replaced most of traditional flagstone roads in China. Photo by Wendy Lycan Jackson ’64 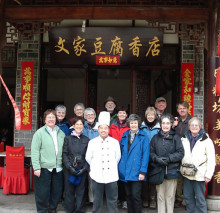 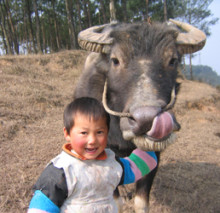 During Justman’s third visit, wanting to see the more traditional Chinese countryside, she followed the route taken by a traveler in 1910. For the first three days, she did this by bus. But on the fourth day there was no bus and she had to walk to the next town. Thus she discovered her first old Imperial road. “Two thousand years ago, the entire country was linked by more than 25,000 miles of flagstone roads,” she says. Most have been replaced by modern highways, but in the mountains of Western China, fragments of the old roads remain.

Seeking and hiking ancient pathways in the provinces of Yunnan, Sichuan, Guizhou, and Shaanxi became her link to traditional China. Here lie villages where people live much as they have for thousands of years. “I fell in love with old roads,” says Justman. “Every year I would go back and try to find more of them.”

The Chinese are very proud of their ancient culture and temples, but this pride does not extend to their historic roads. Many rural Chinese think themselves old-fashioned and behind the times, often referring to themselves as luòhòu, meaning “backward.” Improving their lifestyle also means improving their roads. In many villages, people can only bring in what they carry on their backs or on a donkey. Paved roads allow them to drive trucks right up to their doors, bringing construction material to modernize their houses along with color TV sets and washing machines. Thus, when villagers improve access to their village, old flagstones disappear under cement.

Sharing “Her” China with Alumnae

In 2007, Justman, by then a seasoned expert, published a comprehensive travel book, Guide to Hiking China’s Old Road to Shu. It is filled with tips including where to find local guides, hotels, transportation, and restaurants, and lists helpful phrases for non-Chinese-speakers. The book is periodically updated at chinasgreatroads.com.

The book, and Justman’s repeated visits, have raised interest in the old roads among Chinese travelers. Many locals are now aware of the historical value and tourism potential of their area. “By coming there, I have done some good,” acknowledges Justman, noting that two towns have promoted the road to Shu as a tourist attraction and applied for heritage status from the government.

Those towns have become a destination for urban Chinese visitors. And since 2011, Justman has twice led MHC alumnae along the old roads. After a chance encounter at one College reunion, Justman—who knew China—teamed up with Jane Shilling Emerson ’64—who knows tours—to organize the expeditions. Traveler Mary Dee Beall ’64 says, “Hope’s respect for the people and their culture radiates from her, and she attracts a crowd wherever she goes.”

Justman particularly enjoys leading the groups along a reconstructed plank road in a narrow gorge on the Jialing River. It turns out the road along the sheer cliff in the painting was not imaginary after all.
—By Lauren Quirici FP ’14