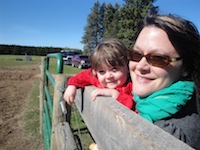 Sarah LaChance Adams ’99 is the 2012 Mary E. Woolley Fellowship winner. She is pictured here with her daughter, Geneva.
Photo by Robert DeWitt Adams

A woman kills one of her own children every three days in America, research shows. While we would like to believe that these mothers have nothing in common with “good mothers,” it turns out that this is not really the case, says Sarah LaChance Adams ’99. Maternal ambivalence and mothers’ simultaneous desires to nurture and reject their children are fairly common and the result of valid conflicts between mothers’ and children’s needs, she says.

LaChance Adams is at work on a book examining the issues of maternal ambivalence and filicide. She has been awarded the 2012 Mary E. Woolley Fellowship to complete final revisions on the manuscript, which is under review with Columbia University Press. She is currently assistant professor of philosophy in the Department of Social Inquiry at the University of Wisconsin–Superior.

The complexity of mothers’ responses to their children is instructive for ethical theory, LaChance Adams notes, because it brings both human interdependence and separable interests into relief. “I claim that ethical ambivalence is morally productive insofar as it helps one to recognize the divergence between oneself and others,” says LaChance Adams, who holds a PhD in philosophy from the University of Oregon.

Maternal filicide is a social problem that requires a collective solution, she adds. The social and material circumstances of the mother are key in differentiating mothers who kill from those who do not. “An ethical model that favors individual moral responsibility is counterproductive.”

According to LaChance Adams, no other book discusses these issues in philosophical terms, but interest in the topic is significant. Her publisher says the book will appeal to social workers and women’s-studies scholars and is written in a lucid enough manner to attract the nonphilosopher, too.

The fellowship, sponsored by the Alumnae Association, carries an award of $7,500.