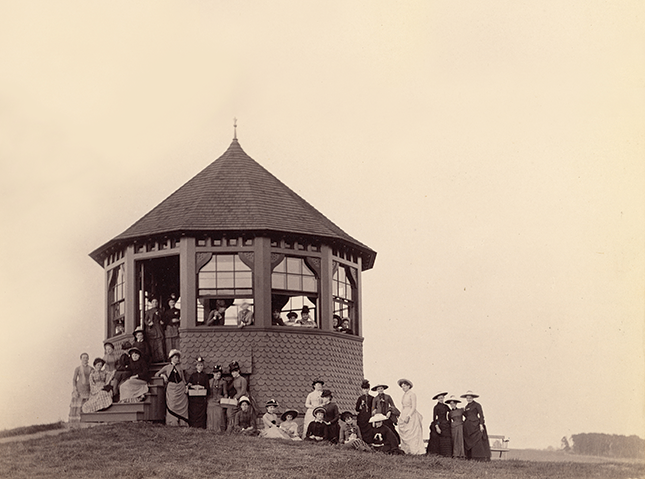 A Place for Star Gazing

Lost to time, the Pepper Box was once a highlight of campus. Built in 1884, this small, twelve-sided building had two nicknames: The Pepper Box, for its resemblance to pepper shakers of the time; and the Spoon Holder, a rare old-timey nod to the “spooning” done beneath its burgundy roof. Witty student remarks at the time tell us that “spooning” (and “stargazing”) was a euphemism for something terribly improper among unmarried persons!

While some Mount Holyoke students would bring their male dates from Amherst and other colleges to the Box, subtle references are made to its popularity with lesbian couples as well, as seen in the song “There’s a Famous Old College” by 1899 graduate Marie Matson Hofmann, which cheekily says, “To the Holyoke maidens, the Pepper Box surpasses all, / As a place in which to linger, when the twilight shadows fall.” During daylight hours, the Pepper Box was also a popular spot for picnics. Situated on the top of Prospect Hill years before the gentle slope was covered in trees, picnickers could see across campus and beyond. Special performances were often hosted at the Pepper Box, including May Day celebrations and costumed parades. 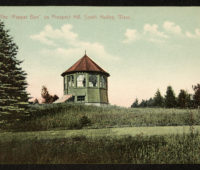 Ode to the Pepper Box

Learn more about the Pepperbox, which is featured in a fall Mount Holyoke College Art Museum exhibition.
Web exclusive

Alas, the beloved Box was removed in 1917 after a time of disrepair. An article from a local newspaper reported that “outsiders began using it as a target for sand and pebbles. The windows of the bandstand-like structure were frequently shattered and finally the college authorities decided . . . to tear the building down.”