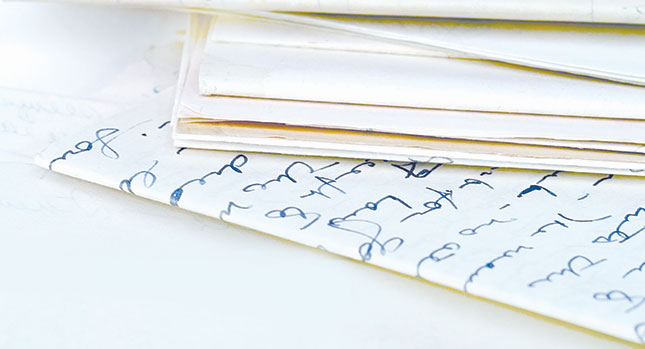 “When I was a child, mother used to tell my brothers and sisters and me about the round-robin letters,” says Susan Hewitt FP’93. “It was part of the family lore.”

Hewitt’s grandmother, Alice Walker Hodgkins, class of 1909, arrived at Mount Holyoke College in the fall of 1905. By the time of graduation she had formed a tight-knit circle of friends, and they vowed to keep in touch. For sixty years Hodgkins and nine of her classmates were part of a round-robin correspondence—a package of letters, clippings, and photos that each friend added to before sending it on to the next. Once the letter reached all members, the “round robin” started again. The practice became such an important part of their lives that some of their daughters took over when their mothers passed away.

Ruth Hodgkins Hewitt ’42—Hodgkins’ daughter and Hewitt’s mother—grew up hearing the stories of these Mount Holyoke women and passed them down to her own children. “Sometimes they were very poetic,” Hewitt says. “They’d write, ‘Oh, I was feeling so blue this winter, but then ‘robin’ flew in today and everything brightened.’”

When Hewitt decided to return to college as an adult she was accepted to both Smith and Mount Holyoke. Her daughter went to Smith, and so her inclination was to join her there. But when she recalled the story of the round-robin letters and the intensity of the bond between her grandmother’s friends, she ultimately made her choice to attend MHC.

“I wish I had saved copies of my letters,” says Dorbandt. “What memories they would evoke!”

One response to “MoHome Memories: Writing a Shared History”