Mount Holyoke: A Haven from the Holocaust 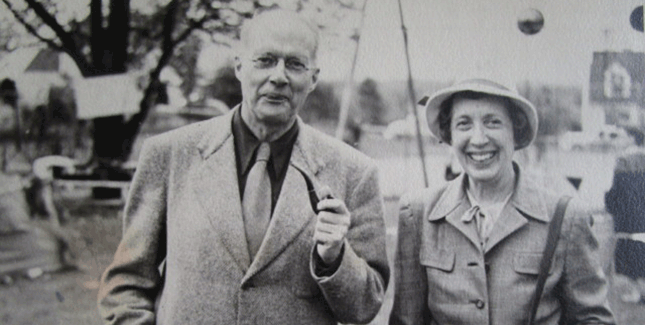 In 1937 a promising academic career in Germany came to a skidding halt, when Professor Friedrich (or Frederic, as he was known later) Carl Sell refused to divorce his Jewish wife, Elsa. Sell had studied history, German literature, art history, and philosophy at the Universities of Heidelberg, Leipzig, and Bonn. Between 1920 and 1928 he taught German, history, and art history at a college (“Kolleg”) in Godesberg. From there he went to Berlin, where he developed a concept for the Prussian Ministry of Education to provide training of university standard to primary school teachers. In 1930 he was appointed professor of history at the Teaching Academy in Kassel, but in 1933 he was demoted and transfered to a girls’ high school in Marburg. When he was forced into early retirement in 1937 at the age of forty-five, he decided it was time to leave Germany. Sell traveled to the United States, where, with the help of relatives and friends, he was able to procure a contract for one year as a guest lecturer at Harvard University.

To his friends’ and relatives’ in the US horror, Sell insisted on personally returning to Germany to fetch his family—wife Elsa and teenage daughters Cornelia and Marianne. The day before they planned to leave to return to the States, the Gestapo appeared at their house and confiscated their passports. However, with wise foresight, Sell had deposited a second family passport with a friend. That evening the Sell family quickly gathered up their belongings, collected the passport, and left for Rotterdam, from where their ship departed. On June 14, 1938, the Sells family arrived in New York, filled with both expectations and anxieties.

Sell’s contract at Harvard was renewed twice, and then, in 1941, he was offered a more permanent position as assistant professor at Mount Holyoke College. Cornelia was already a student at Smith College, and Marianne had just finished struggling through high school. Considering that when she arrived in this country, she spoke hardly a word of English, she did quite well. Her family moved closer to Mount Holyoke, and she was accepted as a day student, graduating in 1946.

Frederic Sell died of a heart attack in 1956. Due to the intolerable political and social situation and the hostility and animosity to which he and his family were subjected in Germany, his health had been failing for years. However, the warm welcome and the opportunity to make a new, safe home in South Hadley went a long way to alleviate the pain and sorrow experienced before, during, and after fleeing. Mount Holyoke offered not only the intellectual and academic challenges he sought but also the chance to convey to future generations a deep knowledge of European history and culture and his vision that the individual counts and must take a stand.

Convinced that the only way to prevent another catastrophe, such as the one from which the family had barely escaped, was to promote communication, knowledge, and understanding of other countries and cultures amongst young people, the Sells actively supported student exchanges and studies abroad. The Frederic and Elsa Scholarship Fund, founded by friends, relatives, and former students, continues this tradition of cultural exchange. Awarded every year, it provides support to an undergraduate student studying abroad (not only in Germany) and pursuing independent, interdisciplinary study.

From 1950 on, Elsa Sell offered conversation classes accompanying beginning and intermediate German courses. When, at the age of seventy-five, she ceased giving them, everyone thought she was 65 and was simply retiring normally. She continued to play an active part in the Mount Holyoke and South Hadley communities until 1981, when she moved to Vermont to live with her daughter Marianne and her family. She died in 1991, one month after her 100th birthday.

In her eulogy of Elsa Sell, Hildegard Scheffey Ryals ’54, said, “From the moment they were invited to join the German department at Mount Holyoke, both Frederic and Elsa participated wholeheartedly in the life of the College and the town. Soon their house on Bridgman Lane, and later on Silver Street, became ‘home’ to countless students and to friends of their daughters. Tea or better, and hospitality at all hours with wide-ranging discussions of art, politics, philosophy, or civilization were reason enough to elect courses with either Sell.”

After the war, Frederic and Elsa sent CARE packages to suffering relatives back in Germany. As a “thank you,” his niece in Essen invited me, their granddaughter, to spend my junior year abroad living with her and her family and attending the Ruhr University in Bochum. That experience influenced me so much that upon finishing graduate school I returned to Germany to teach. At the end of my first year, I met Bruno Meins, who would become my husband, and have remained here ever since. Both my mother and I have been instrumental over the years in organizing student exchanges between our two countries, knowingly carrying on the tradition and vision of Frederic and Elsa Sell.

Read about how Gerda ’49 and Doris Bloch ’49 also found a home at Mount Holyoke. »

3 responses to “Mount Holyoke: A Haven from the Holocaust”