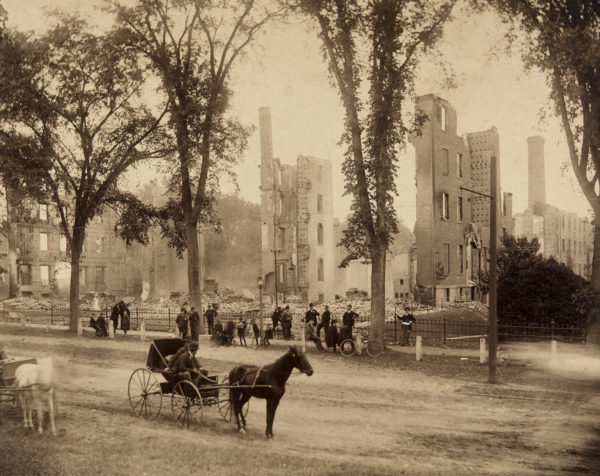 A WINTER EXHIBITION in Hinchcliff Reception Hall at the Mount Holyoke College Art Museum examined three devastating blazes that had a significant impact on the College. The exhibition reconstructed what daily life was like in campus buildings and contextualized what was lost during three fires over a period of just 26 years by examining photographs and objects, including letters from students, now housed in the College’s Archives and Special Collections.

“I suppose by this time you have heard of the fire,” wrote a Mount Holyoke student in a letter dated September 28, 1896, one of the objects on display.

The writer and her roommate had just returned from a walk and entered the dining room before supper when the sound of running feet rang through the hall.

“The thought of fire struck me at once,” she wrote, “and glancing out of the window I saw smoke pouring out of the gymnasium windows.”

As the fire spread, the letter detailed, students tied wet handkerchiefs over their noses and mouths and tried to save what they could from their rooms until the smoke became unbearable.

Five hours after the fire began, the building was in ruins, though firefighters had managed to save the library by tearing down the corridor that connected it to the main building. Students and faculty spent that night and those to come rooming with locals who opened their homes. Classes resumed on Monday.

“There was never a minute from the time the fire began that we were not brave and calm and hopeful,” wrote Henrietta Hooker, professor of botany, several days after the blaze in a 21-page letter sent to Marion Gaylord Atwell, class of 1879, president of the New York Alumnae Association. “There was never a moment of panic.”

This article appeared as “What Was Lost” in the spring 2019 issue of the Alumnae Quarterly.