In 1917 Williston Hall—the College’s art and science building—burned to the ground. Fire was a common occurrence and of utmost concern, not just at Mount Holyoke but across the country. In fact, President Woodrow Wilson issued the first National Fire Prevention Day proclamation in 1920.

Fire drills were held in each hall at least once a month. However, students did not always have to evacuate the building. Instead, they merely reported to the first floor for roll call.

Students were advised to do several things before reporting, including putting on a bathrobe and slippers, finding a towel, closing windows and transoms, putting out gas lamps, leaving the doors to their rooms open, and, finally, going quickly and quietly to the first floor.

Hair curlers were the only permitted electrical devices in students’ rooms. All other devices would incur a $5 fine if found. Fluids commonly used in cleaning substances and oil lamps that were once commonplace in dorm rooms, such as naphtha, gasoline, or benzene, were also strictly forbidden starting in 1920.

Once a year, students were required to perform a variety of fire safety exercises, including using rope ladders to climb out of windows, passing buckets of water down an assembly line, and carrying fire hoses to different stories of buildings.

Contemporary buildings are much safer than those of decades past, which were constructed mostly of wood and did not contain smoke alarms or sprinklers.

Each Mount Holyoke dorm has three scheduled fire drills per year. Fire safety inspections are performed four times annually, during which each dorm’s team of student community advisors ensures that their building is free from hazards such as halogen lamps, upholstered furniture, and, most importantly, candles and incense, the most common causes of fire.

Today, the main message communicated to students during a fire drill is, “Get out and stay out.” When an alarm sounds, students are instructed to put on a coat, grab a towel (to cover their faces), leave the lights on, and exit the building.
Each dorm has a designated fire safety zone outside of the building where students are to report for roll call and wait for the “all clear” signal, given by a member of the campus police department.

In contrast to the arduous safety exercises students were asked to perform in 1920, students today tend to stand around in their pajamas—chatting or reading—waiting to be called back inside. 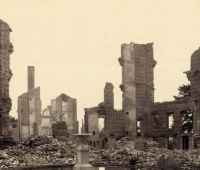 The History of Fire & Fire Safety at MHC

Many of MHC’s buildings have been partially or completely destroyed by fire over the years. Learn more about the fires and fire safety on campus.
”Web