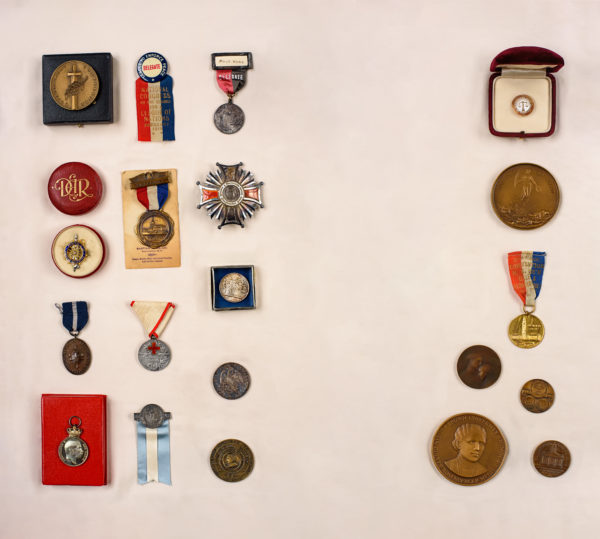 During her lifetime Mary Woolley, who served as Mount Holyoke president from 1901–1937, amassed a collection of about two dozen medals, coins, ribbons and badges that is now housed in the College’s Archives and Special Collections.

In 1937 Woolley was the first woman to be awarded the Susan Colver Rosenberger Medal — the highest honor awarded by Brown University. Woolley graduated in 1894 as the university’s first female graduate and received a master’s degree from Brown in 1895.

She received a commemorative coin from the Conference for the Reduction and Limitation of Armaments of the League of Nations when President Herbert Hoover appointed her to serve as a delegate to the conference in Geneva, Switzerland, in 1932. She was the only woman in the U.S. delegation to attend the conference.
Woolley also owned a pin from the Daughters of the American Revolution as well as several medals or badges for her service as a delegate at various colleges’ anniversaries, including a badge for Vassar College’s 50th anniversary, a medal for Monticello College’s centennial and a badge for Mount Holyoke College’s 75th anniversary.

This article appeared as “Impressive Collection” in the fall 2018 issue of the Alumnae Quarterly.