My Voice: Kelly Bahmer-Brouse ’86 on becoming an (older) alumna

Click here to view a text-only version of this graphic essay with image descriptions.
[First panel: Two students are outside of a building on campus. One sits on the steps with a book, and the other stands with arms raised, talking animatedly.] Mount Holyoke, 1983: I was working class reunions to earn some extra money. One day, as I was relaxing between shifts, a sister reunion worker rushed up to me. [The standing student says] “Older alumnae are AWESOME!”
[Second panel: Closeup of the two students, now both excited. The standing student says] “’It’s Raining Men’ came on the radio as I was helping a couple of them to their room. One said, ‘Oh, I LOVE this song!’ and they both started DANCING!” [The other student responds] “Wow!” [An asterisk at the bottom of the panel explains that “It’s Raining Men” is a “then-popular disco hit.”] [Third panel: A black-and-white photograph shows two alumnae dressed in 1940s fashion from their college days.] I was awed, astounded and delighted. They were from another era… and they liked the same things we did!
[Fourth panel: The seated student from the first couple of panels, now older and back for reunion, sits on a green Adirondack chair. A bubble with a heart in it points from her heart to a photo of her younger self, captioned “(my senior picture, 1986).”] Sitting on Skinner Green recently, it dawned on me that I’m now the same age as those alumnae. I realized that to today’s students, the mid-1980’s must seem as far away as the 1940s did to us. But, I thought, “I don’t feel so very distant from the class of 2020… And I know someday 2020 will seem long ago to the class of 2055.” [An image shows someone wearing a space suit with “MHC” on the front. A bubble in the back encircles a futuristic version of the Mary Lyon clock tower, and is labeled “MHC Martian Extension campus.] Then, from across the green, I heard… “Hey! Let’s get out the slip-n-slide!” [Fifth panel: An inflatable unicorn connected to a hose with water spraying from its horn is on the grass.] Some students had set up an inflatable sprinkler on the green. My first instinct was to rush over and ask if I could join in the fun. But as I started to get up… [Sixth panel: A hand holds a smartphone. The screen reflects the image of the speaker’s face. A thought bubble shows a large exclamation mark.] I enabled the front camera on my phone by mistake, and caught sight of myself as… Well, not… OLD. Just older. And I decided sliding on wet plastic was not a good idea. [Seventh panel is a thought bubble connected to the sixth panel. It shows the speaker’s younger self using a slip-n-slide, squealing “wheeee!.”] I realized Gertrude Stein was right: “We are always the same age inside.” Or at least I am. 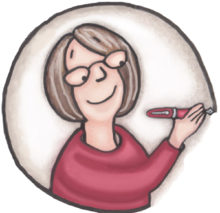 Kelly Bahmer-Brouse ’86 lives in Cleveland, Ohio, with her husband, Andy, and cat, Archie. More of her illustrations and comics may be found at KellyKomics.com.

This article appeared as “Boomer, OK” in the winter 2020 issue of the Alumnae Quarterly.

One response to “My Voice: Kelly Bahmer-Brouse ’86 on becoming an (older) alumna”