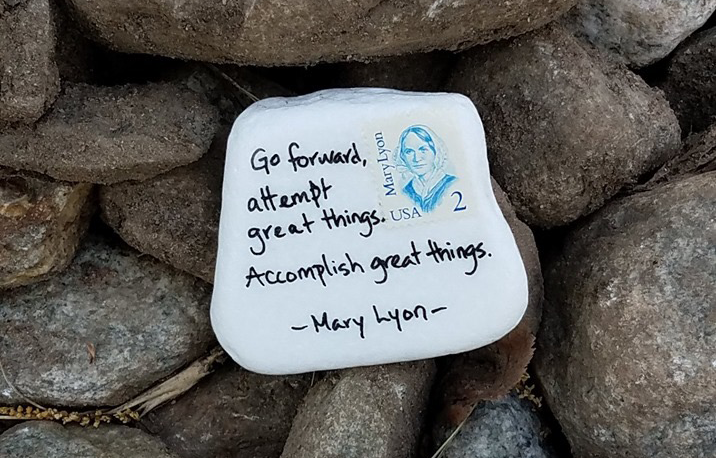 Kindness rocks painted by Molly Dietrich Morris ’99 are part of a global grassroots campaign to spread joy. The rocks shown here were hidden around campus during Reunion in May.

About a year ago, Molly Dietrich Morris ’99 joined The Kindness Rocks Project™, a grassroots campaign launched when a rock painted with a note of encouragement was found and taken to heart. Last July, as Morris anticipated her upcoming 20th college reunion, she painted a rock with the lyrics of “Bread and Roses” and set it aside to hide on campus.

“Once I decided to ‘rock’ campus,” Morris says, “I set myself an ambitious goal of making 99 rocks for Reunion (to represent my class of 1999).” 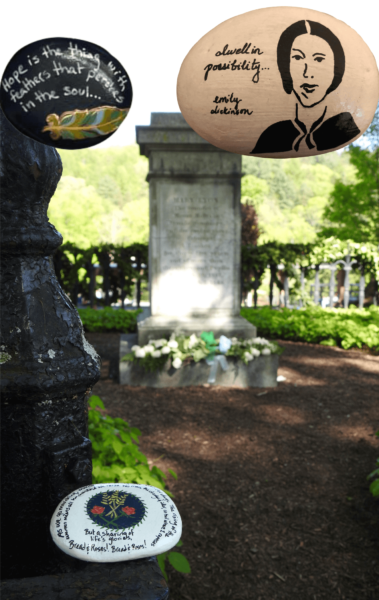 Over the next several months Morris decorated about 70 rocks with Mount Holyoke themes: the College seal and images of and quotes by Mary Lyon, Frances Perkins, class of 1902, and Emily Dickinson, class of 1849. The other 30 were colorfully painted with general words of encouragement or funny images.

When she got to campus in May, Morris enlisted her classmates’ help to hide the rocks as they revisited favorite places at the College. Rocks were left all over campus, including the very special “Bread and Roses” rock that Morris placed near Mary Lyon’s grave.

The exercise, Morris says, “added a new level of engagement and connection to an already wonderful weekend.” Several classmates brought painted rocks home to place in their own communities, literally bringing pieces of Mount Holyoke into the world.

One response to “On Display: Painted rocks hidden across campus”