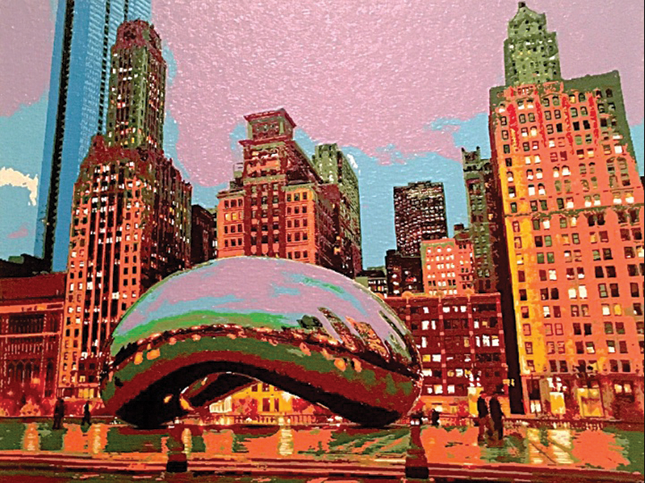 “I’ve been selling pieces to Ripley’s Believe It or Not for several years now,” says Kerry Mott ’09, an artist whose unusual medium is duct tape and whose oversized works take thousands of hours of meticulous planning and implementation to complete. When someone who worked at Ripley’s encouraged her to submit her work to Guinness World Records, Mott jumped at the chance. She was soon rewarded.

The record-breaking piece is a wall-sized, dramatic image of an erupting volcano emerging from ocean waves against a night sky replete with a full moon and its elaborate craters. It has officially been deemed the largest piece of artwork ever made from duct tape, and Guinness bought it for a new venue they are creating.

“I basically invented my own style of art, which is similar to pointillism,” Mott says. “Creating my own methods does come with some challenges. It took me a lot of trial and error, because I had no other points of reference.” She has honed her distinctive style and gained a great deal of exposure by entering contests, including ArtPrize — one of the most heavily attended public art competitions in the world — located in Grand Rapids, Michigan, where her volcano creation was first on display.

Mott graduated from Mount Holyoke with a degree in neuroscience and behavior with the plan to go to medical school, but her hobby from high school kept drawing her back. She had made duct tape bags for fun and sold them to her friends. “I would create designs on the front of the bags, and the designs became more and more intricate until I got to a point where, since the designs were my focus, I figured I could translate it to a two-dimensional art form,” she says.

Each piece Mott creates is painstaking. She decides on an image, makes a sketch and plans the colors to use — limited by what is available in duct tape. Then she hand cuts tiny rectangular pieces of tape (a dozen could fit on a penny) and positions them parallel or perpendicular to each other, carefully layering until the form she desires takes shape. 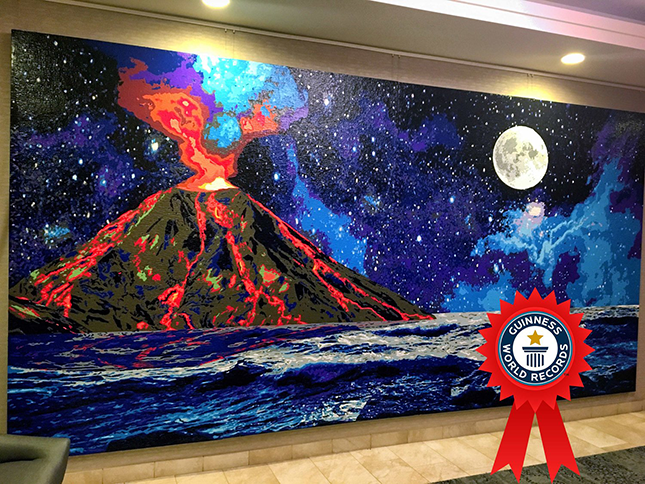 Mott has tackled a wide range of images in her wall pieces — plants, animals, cityscapes, landscapes and portraits, including one of Paul McCartney — to push herself to see what she can accomplish with the unlikely medium. She has also created replicas of artwork “that others could immediately identify, such as Van Gogh’s ‘The Starry Night,’” she says.

Mott has shown her work in galleries in her home town of Gettysburg, Pennsylvania, as well as in Washington, D.C., New York, Michigan and New Jersey. She was recently chosen to participate in a “collector’s show” in Grand Rapids, where her creations will hang alongside the work of artists including Arthur Dove, Marsden Hartley, Janice Biala, Fairfield Porter and Robert De Niro Sr. She is thrilled with the reception to her unique style of art, and says, “Perhaps my duct tape art could be in the Smithsonian someday!”

This article appeared as “Breaking Records through Art” in the summer 2018 issue of the Alumnae Quarterly.