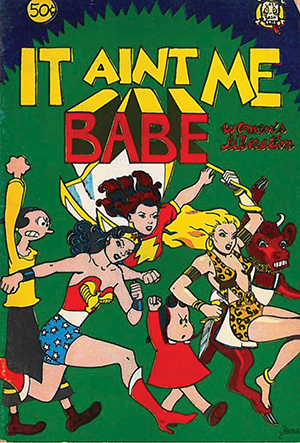 In the spring of 2014 Mount Holyoke College acquired a first edition of It Ain’t Me Babe, the first American comic book to be created entirely by women, published in 1970. “When we looked at our collection in terms of curricular usage, we realized that there was a shortage of material from the modern women’s movement,” says Leslie Fields, head of Archives and Special Collections. “This was our first purchase toward rectifying that discrepancy.”

Acquisition of the volume coincided with the 2014 publication of The Secret History of Wonder Woman by historian and Harvard history professor Jill Lepore, who spent a lot of time on campus researching Sadie Holloway, class of 1915, said to be the inspiration for the character of Wonder Woman. “It seemed like a serendipitous acquisition,” says Fields, especially considering Wonder Woman is depicted on the comic book’s cover.

It Ain’t Me Babe includes comics from early comic artists and writers Trina Robbins, Lisa Lyons, and Michele Brand, members of the Berkeley-based Women’s Liberation Basement Press. Initially these women came together to create an alternative comic in a male-dominated industry. In just a few years, however, the collaboration led to the creation of Wimmen’s Comix, an influential all-female underground comics anthology published from 1972 to 1992 that dealt directly with feminist concerns, homosexuality, and politics. 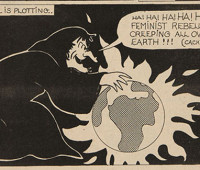 Read “Breaking Out,” one of the comics included in It Ain’t Me Babe.
Web exclusive

The comic book contains stories including “Queen of the Jungle,” which follows a wild-spirited woman who fights injustice and is bookended by sketches of secretaries drudging through their work. Perhaps most intriguing to Mount Holyoke scholars, who can view the book in the College’s archives, the comic includes an account of the feminist awakenings of the marginalized heroines of mainstream comics.