On Mentoring Women in Technology 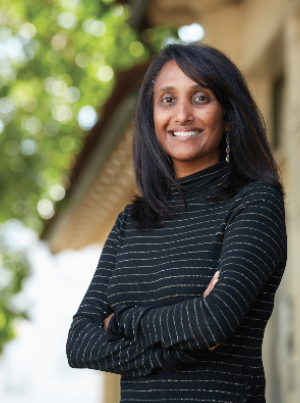 Sowmya Subramanian ’96 is senior director of engineering at Google, where she has worked for more than a dozen years. Instrumental in the development of several YouTube products, including YouTube Live and YouTube Kids, as well as in the transformation of YouTube from an exclusively ad-based site to the addition of YouTube Premiere, her platforms have won several awards — as has her leadership. Subramanian is committed to the empowerment of women and girls in technology, and as such co-leads the Google North America group Women@, for women working at Google; serves on the advisory boards of PBS Kids and iTVS Women & Girls Lead Global; and has given several talks about empowering women through technology, including at Mount Holyoke in March 2019.

I see women in technology wondering why they’re asking questions no one else in the room is asking, and they start telling themselves a story that this is not the right way to think, or they are not technical enough or not the norm of how to behave. That’s just not OK. Embrace yourself and your uniqueness. If you have potential and talent, no matter who you are, you should be able to use it and do good things. You should be able to own it.

On modeling “owning it”:

After graduate school at the University of Wisconsin, Madison, I became an engineer at Oracle in the core database team — one of the top database companies at that time. Within my first year I realized that a lot of my ideas would take too long to be seen by the end user, and my motivation for being in technology was to solve user problems. So I moved from database development to a small team responsible for building apps and web experiences, which grew to become the platform for all of Oracle customer relationship management. My strong technical background combined with my ability to see the bigger picture and how to apply it to meet user needs allowed me to build products that resonated with people and inspired others to work on. Soon enough I was working in management positions.

Similarly, at Google, I kickstarted an initiative, “Bridging the Gender Gap,” to help us critically look at our products, algorithms, designs and marketing to identify any gaps and figure out how to bridge them. This forced us to look at the same problems and products we’d been looking at before, but from a different angle, which helped us with innovation. Very quickly we realized this is not about gender, and pivoted to “Inclusive Design.” It was eye opening for me to see that a lot of our products have more opportunity to be designed to be inclusive. I could map why something would matter for the user, or how to alter it to solve the user’s problems. I understood where the actual gaps and needs were and how technology could innovate to help fill those gaps.

When I joined Google, I went to some marketing studies to understand user needs, which surprised the marketing team because they’d never had an engineer be so collaborative with them. I started seeing that people love the videos on the YouTube Kids platform, but in speaking to some families we saw an opportunity to build out more specialized experiences more accessible to everyone. I looked at it from the consumer point of view — if I’m a kid, how do I engage with YouTube? When content creators see that users are engaging more deeply, they are going to be able to innovate in a different way, too. It allows for the building of an ecosystem that benefits the creators and the consumers.

Within the first 10 years, 50% of women in tech leave their engineering roles. One of my goals in Women@ is to keep women at Google. We don’t see many women engineers participating in some of the things that connect people to the work. So I hosted a hackathon. It took place over two days [most hackathons are 24 hours long], so if you had to drop off or pick up your kids you weren’t sweating it. I also allowed for cross-functional groups — across engineering and business — so that you didn’t need to be writing code to participate. And then I made the theme “Bridging the Gender Gap,” so people were driven to first prove that there is a gender gap and, second, to figure out how to bridge it.