The visionary work of Ann O’Leary ’93 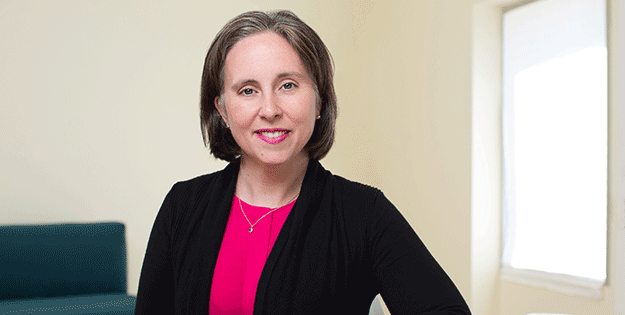 The national press has taken to calling Ann O’Leary ’93 a wonk (Politico and Fortune magazine), and even a wonk and a nerd (Elle).

Of course, the fact that they talk about her in the context of an historic presidential campaign is something special. In fact, in both 2015 and 2016 Politico Magazine named O’Leary to its list of top fifty “thinkers, doers, and visionaries” who are transforming American politics.

So, for the senior policy advisor in Hillary Clinton’s presidential campaign, the gentle slights are actually badges of honor.

“For me, those are huge compliments,” she says, convincingly. “I’m a bookish, ideas person, so I see those as wonderful compliments. I’m lucky to be part of the Nerd Squad.”

O’Leary, a mother of two young children, has played a major role in shaping policy. Her focus is her passion—children, family, and women’s issues—in a campaign that aims to elect the first woman president of the United States.

It would be a singular achievement, capping O’Leary’s years with the Clintons, both Bill and Hillary, in the White House and the United States Senate.

And O’Leary attributes a good measure of her success to her Mount Holyoke education. One of the first to graduate with a major in critical social thought, and a member of a championship cross-country team, O’Leary also learned from being part of a diverse community for the first time in her life.

I’m a bookish, ideas person, so I see those as wonderful compliments. I’m lucky to be part of the Nerd Squad.Ann O’Leary ’93

The daughter of a union leader and a social worker, O’Leary found herself fascinated with politics and philosophy soon after arriving in South Hadley. For a future policy leader, her timing was fortuitous. Led by Joan Cocks, now professor emerita of politics, Mount Holyoke was developing the critical social thought major, designed for students “who want to interrogate cultural and social phenomena outside the confines of traditional disciplinary boundaries with the goal of analyzing relations of power embedded in knowledge production and social life.”

Mount Holyoke’s diverse student body was a revelation to O’Leary, who had grown up in a mostly white community. In describing her first year in Brigham Hall, she says, “Our group of friends included two women whose families had immigrated from India; another who was African American from Houston, Texas; an Asian woman from the Philippines; along with a woman from Wisconsin, another from Chicopee, Massachusetts, and me from Maine. . . . So we ended up having this very tight bond with this group of people who were very diverse, from very different perspectives, and we’ve remained lifelong friends. We still get together every couple of years. We stay in very close touch.”

Another discovery, distance running, served as a healthy complement to all the deep thinking. O’Leary was a member of the 1992 cross-country team, which was the first at MHC to win a Seven Sisters Championship. (The other championships were in 1999 and 2007.) Her teammates included Lori Hendricks ’92, the Lyons’ current athletic director.

“One of the things about Mount Holyoke is you get this amazing intellectual atmosphere, but also you get a real well-roundedness in terms of being a whole person,” O’Leary says. “And I think as I have gone through my life, running is the thing that always grounds me and centers me. I feel like it’s such a gift that I was able to do that at Mount Holyoke and then literally continued for all the years since.”

O’Leary still aims to run daily. “Especially when you’re on a campaign, it’s literally 24/7, not a lot of opportunity to take a deep breath,” she says, “and so I think getting away from the computer and the email and just having a moment to organize your thoughts and also just to relax a little bit, it’s good for your physical and mental health.” 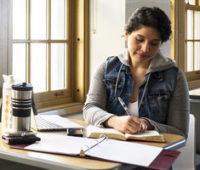 Learn more about Ann’s work as cofounder and vice chair of the Opportunity Institute.
Web Exclusive

O’Leary’s time with the Clintons started almost immediately after graduation from Mount Holyoke. (She later earned a master’s degree in education policy analysis from Stanford University and a law degree from the University of California, Berkeley.) The work stemmed from her activism with the College Democrats.

As a student O’Leary had worked on campus to get women to support Bill Clinton during his successful 1992 run for president. Then after graduation in 1993, while holding a job, she would get up at 4:00 a.m. to work as a volunteer at the White House, cutting up newspaper clippings (yes, pre-Internet) to keep Clinton and his senior advisors on top of national issues. That soon led to a staff position at the White House. Later, O’Leary became a policy advisor to Hillary Clinton as part of the first lady’s staff.

O’Leary recalls first encountering the first lady indirectly. “I was working on the second floor of the West Wing of the White House one day and I remember hearing this amazing laughter coming from around the corner, and I said to somebody, ‘Who is laughing like that?’ And it was Hillary Clinton,” O’Leary says. She describes the hearty laugh as infectious, even if Clinton’s political opponents and Saturday Night Live sometimes mock it.

Their first meeting was several years later, at The White House Conference on Teenagers in 2000. O’Leary consulted with Clinton as she put together the agenda.

“I remember being very nervous and beginning to brief her and to tell her what was going on, and I remember being so impressed by how sophisticated she was in the research and understanding of youth development and what adolescents were facing,” O’Leary says. “I, of course, had read a lot about it and thought a lot about it. And I remember thinking how much she substantively added and made better what I had put forward.”

O’Leary attributes a good measure of her success to her Mount Holyoke education. One of the first to graduate with a major in critical social thought, and a member of a championship cross-country team, O’Leary also learned from being a party of a diverse community for the first time in her life.

Two years later, in 2001, after Clinton was elected to the US Senate, O’Leary became her legislative director for two-and-a-half years before leaving for several new positions over the coming years. O’Leary reconnected with Clinton in 2008, volunteering on Clinton’s first presidential campaign, and again in April 2015, when she took on her role as Clinton’s senior policy advisor.

“We both care so deeply about how kids in America are doing,” O’Leary says. “Even when there’s an issue that, frankly, may not poll well, but we know that the science really supports it, she’ll always really just back up how much we need to do something.

“I always say to people, I’m very lucky because I get to work on Hillary Clinton’s favorite policy issues.”

After Clinton left her position as secretary of state in early 2013, O’Leary wrote a long memo urging her to get involved in children and family issues in the US again. One of the things that emerged was a collaboration on an initiative called Too Small to Fail, which promotes research on the science of children’s brain development and then helps identify ways that parents, businesses, and communities can utilize what the research finds. The initiative was launched by the nonprofit policy organization Next Generation, where O’Leary served as vice president and director of its children and families program. Next Generation later partnered with the Bill, Hillary & Chelsea Clinton Foundation on Too Small to Fail.

One of the things about Mount Holyoke is you get this amazing intellectual atmosphere, but also you get a real well-roundedness in terms of being a whole person.Ann O’Leary ’93

O’Leary spent three-and-a-half years at Next Generation, then in April 2015 she cofounded the Opportunity Institute. The Berkeley, California-based nonprofit advances “pragmatic, evidence-based solutions that will combat inequality and build stronger, more equitable ladders to success.”

Until August, when she was named codirector of the Clinton-Kaine Transition Project, O’Leary worked on the Clinton campaign from her home in Oakland, California, frequently flying to headquarters in Brooklyn. She now spends much of each week in Washington, DC, flying home Thursday night or Friday morning to be with her kids and working remotely during weekends.

The New Republic said Clinton’s choice of O’Leary meant the campaign wanted to make central to its platform the right to take time off work to recover from birth, care for a new baby, or tend to a sick relative without losing wages. Paid-leave advocates were “giddy” about O’Leary’s appointment, “believing that her position in the upper echelon means the campaign means business about this issue,” the magazine said.

O’Leary says her advocacy for paid family and medical leave is among her proudest accomplishments. She began writing on the issue at Mount Holyoke. But she has also helped develop Clinton’s positions on issues such as childcare, debt-free college education, and the Zika virus, which affects pregnant women and unborn children. And she made speeches as part of her campaign work.

That’s a lot of policy.
Nirvana for a nerd.

But it’s too soon to say whether another Clinton presidency would put O’Leary back in the White House.

“I think we’re all so focused on just getting through the election,” she says. “I, of course, care deeply about the agenda that Hillary Clinton’s put forward, and I want to support her in whatever way it makes sense. But right now we’re just so focused on getting there and doing everything we can.”

—By Tom Kertscher
Tom Kertscher is a PolitiFact Wisconsin reporter for the Milwaukee Journal Sentinel and the author of books on Wisconsin sports figures Al McGuire and Brett Favre. Follow him on Twitter @KertscherNews and @KertscherSports.