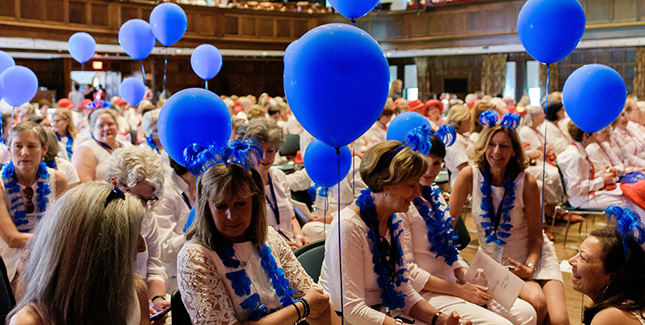 Congratulations to the 2016 alumnae award winners recognized for outstanding achievements and dedicated service to the Association and/or College. The Alumnae Association’s reunion awards program recognizes the contributions of outstanding alumnae. Two volunteer alumnae award committees select recipients based on a twelve-month vetting process that includes extensive research on each nominee. View a complete list of all past winners or recommend an alumna for a future award.

Presented to an alumna for outstanding achievements and service to the larger society through salaried or volunteer fields of endeavor.

Barbara Beers Burkholder, class of 1956, has enacted real change wherever she’s gone, helping improve public education by serving on the city school board in Wisconsin; providing broader access to healthcare by running a wellness program in New York; and sparking dialogue about the need for better public health by directing the community outreach program for a hospital in Michigan. She helped found the Arizona Family Planning Statewide Coalition, and served as executive director of the Arizona Public Health Association and cochair of the Arizona Asthma Coalition.

Janet Bond Arterton, class of 1966, is a dedicated public servant and has distinguished herself first as an attorney focusing on labor and employment law, and later as a United States District judge for the district of Connecticut. She has earned recognition and acclaim by organizations including the Connecticut Women’s Education and Legal Fund and her alma mater, Northeastern University, which awarded her an honorary Doctor of Law.

Mary P. Duffy-Guerrero, class of 1966, launched her career in the mid-1970s as one of the first plus-size models in the nation, and in 1979 began the first modeling agency in the world to specialize in plus-size models and petites. From there, she embarked on a pioneering career that aimed to expand the concept of beauty for the majority of women who do not fit the ideal stereotypes popularized by the media.

Barbara B. Stallings, class of 1966, is a consummate scholar, having earned a doctorate in political science from Stanford and a doctorate in economics from Cambridge. She founded the Global Studies Research program at the University of Wisconsin and served as director of economic development for the United Nations Economic Commission for Latin America and the Caribbean, contributing her invaluable expertise to issues of the day.

Holly Metcalf, class of 1981, was a member of the 1984 US Olympic Rowing Team, bringing home the gold medal in the women’s eight. As a six-time member of the US national team she won four world championship medals. She was twice named the US Rowing Woman of the Year, and has been inducted into the New England Sports Hall of Fame, the National Rowing Hall of Fame, and the inaugural Mount Holyoke Athletics Hall of Fame. Holly also founded or initiated numerous organizations dedicated to bringing women and girls together through rowing in order to build confidence and establish a network of support.

Candida Perotti Wolff, class of 1986, earned her juris doctorate from Washington University Law School, going on to serve as an advisor to former President George W. Bush on legislative strategies relating to economic, domestic, international, and national security issues. She also worked for Vice President Dick Cheney as head of legislative affairs and held a senior staff position in the US Senate for eight years in the Republican leadership. She currently serves as the executive vice president of global government affairs at Citigroup.

Tami Gouveia, class of 1996, has energy, vision, and leadership, which have enabled her to make a visible impact as the director of programs at the Northeast Center for Healthy Communities in Lawrence, Massachusetts, where she secured $1 million in funding to support substance abuse prevention initiatives. As executive director of the Massachusetts statewide advocacy organization Tobacco Free Mass she helped colleges across New England go tobacco-free.

Sarita Gupta, class of 1996, has worked to increase workers’ rights and shape a more equitable economy as director for Jobs with Justice, bringing attention to these issues through media appearances in the Wall Street Journal, the New York Times, and on MSNBC. Her advocacy extends into volunteer service as well, and she has served on the boards or steering committees of numerous organizations, fighting for social justice for all individuals.

Awarded for eminent service in promoting the effectiveness of the Alumnae Association and/or College.

Elizabeth Cannon Gump, class of 1956, received the Loyalty Award in 2011 for her active involvement with her class, club, Advancement, and the Art Museum. In the past five years she has continued to contribute in impactful ways to support the College. She was the driving force behind the class of 1956’s sixtieth reunion project to raise funds for a $100,000 endowed scholarship fund. She has revitalized the Club of Northern New Jersey, organizing two highly successful events at the Visual Arts Center to garner financial support for the College and raise awareness of the reinvigorated club among young alumnae. And as a member of the Art Museum’s 1876 Society, she actively attends museum events, speaks with students, and has endowed a fund to support the program, “Teaching with Art.”

Sandra A. Mallalieu, class of 1991, has the ability to communicate in a way that is relatable to others not familiar with technology, which has been crucial in helping the Association and the College make important decisions about technology on campus, the alumnae directory, and new data systems. In addition, she redefined the role as clerk for the Association Board of Directors; provided invaluable expertise on the Curriculum to Career task force; and delivered keen insight while serving on the Executive Director Search Committee for the Association.

Julianne Trabucchi Puckett, class of 1991, has proven to be a lifelong supporter of Mount Holyoke at the very highest levels through her service as class president and website coordinator, president and cofounder of the Mount Holyoke Club of Kentuckiana, and clerk and vice-president of the Alumnae Association’s Board of Directors. She has shown savvy in keeping classmates connected to one another, helped create a vibrant local network where none previously existed, and brought the work of the Association board of directors to new levels of success.

Presented to alumnae whose accomplishments in the field of education exemplify the values and virtues set forth by the College.

Penelope Laurans Fitzgerald, class of 1966, arrived at Yale University in 1973, where she was among the first women appointed to the Jonathan Edwards Fellowship, a position she has held for thirty-five years. Her attention to the artistic, intellectual, and social life within the Jonathan Edwards community has created an environment that enriches the Yale experience for all, and she is greatly beloved by students for the imaginative and dedicated ways in which she leads.

Awarded to a young alumna (graduated fifteen or fewer years ago) who demonstrates exceptional promise or sustained achievement in her life, profession, or community.

Awarded to honor an alumna who has demonstrated exceptional loyalty to the Alumnae Association and/or College with her consistent effort and active involvement over an extended period of time in at least one area of service.

Awarded to the reunion class with the highest total number of attendees, this award was presented to the class of 1991.

Awarded to the reunion class with the highest percentage of attendees, this award was presented to the class of 1966.

Awarded to the reunion class with the highest total number of attendees, this award was presented to the class of 2011.

Awarded to the reunion class with the highest percentage of attendees, this award was presented to the class of 1956.