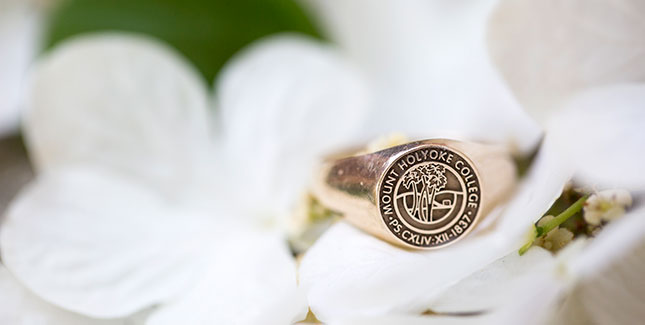 On Thursday, April 9, six members of the Class of 1967 joined more than two hundred members of the class of 2017 for their Rings and Roses ceremony in Chapin Auditorium.

A recent tradition, Rings and Roses is the occasion for sophomores to dress up, to hear a few pep talks on having made it halfway through their undergraduate years, and to receive either the class ring they had purchased or a rose. Participation of the class that graduated fifty years earlier is one way these two classes enact the Connections Program.

Chapin Auditorium sparkled. White mesh runners and a long green vine of artificial ivy scalloped the edge of the stage like bunting, tacked at the peaks with small bouquets of white cloth roses. A string of white lights repeated the scallop pattern along the outside of the balcony. Oversized white paper chrysanthemums hung between the columns at the rear of the auditorium. 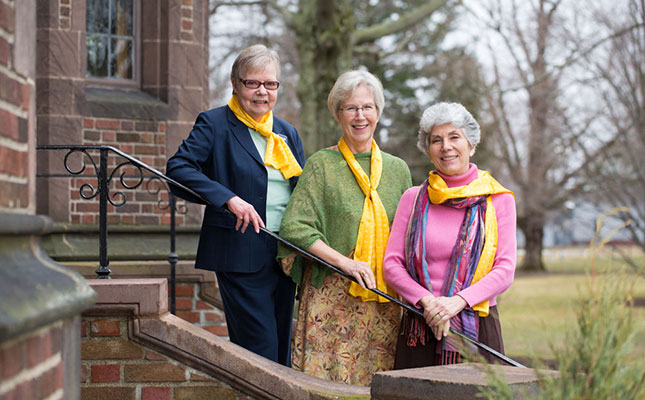 When everyone had gathered, 1967 classmates Joanna MacWilliams Jones and Joyce Kling read out the names of students in attendance. Those who had purchased rings received the closed box from two of their class officers while everyone else received a long-stemmed white rose from class of ’67 members Diane Karoli Belden, Sheila Cooper Frankel, Lora Sue Harvey Martino, and Gail Roth Meister. All six representatives of the class of ’67 were wreathed in the class’s signature scarf, a deep yellow silk imprinted with sphinxes. The students, many in a rainbow of spring frocks, others in regular streetwear, and some in blazers and ties, cheered as their friends’ names were called. 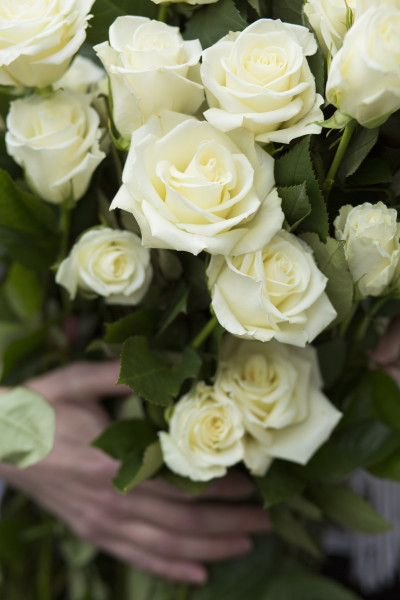 At a signal, all those who had purchased rings opened their boxes. Their class officers told them of the custom that rings were to be worn with the face inward while they were still undergraduates. The face can be turned outward upon graduation. The rings no longer have stones but are inscribed with the College seal.

After the ceremony, everyone mingled to celebrate and share their Mount Holyoke connections. Refreshments—fruit, crudités, cheese, other hors d’oeuvres, and crackers, including gluten-free options—were arrayed on tables draped in long, white tablecloths that were strewn with white and silver artificial rose petals. The complete silver tea service that the class of 1967 had previously gifted to the class of 2017, gleamed at the center of the tables.

In addition to participating in the ceremony and socializing with students as they posed for each other’s photos, the class of 1967 also worked behind the scenes. Class of 1967 reps, along with Sheila’s husband, Robert, helped members of the class of 2017 class board decorate and set up beforehand and clean up afterwards. For some of us, that really cemented a connection over the fifty years between us.

Read more about the Connections Program »

2 responses to “Rings and Roses”