A young alumna’s discovery in Yellowstone National Park is causing a stir far beyond its gates and has sobering implications for the future of the planet.

For nearly five years, Sarah McMenamin ’04 has been conducting research on a subspecies of tiger salamander, called Ambystomatigrinum, as part of her doctoral thesis at Stanford University. The salamanders are robust little creatures that have flourished for thousands of years in vernal pools and kettle ponds formed by glaciers. 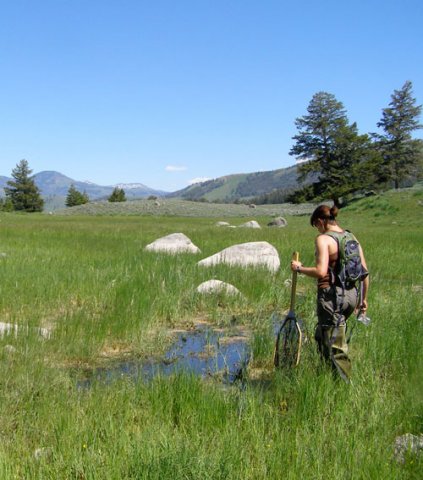 McMenamin was charged with comparing the salamander’s habitat and population to a survey conducted in 1992–93. Guided by wetland sensing data prepared by survey coauthor Christopher Wright, she looked at an area of Yellowstone 10 km in radius that contained forty-nine ponds. What she found was alarming. In 1992–93, twenty-six of the forty-nine ponds contained amphibians. Now only fifteen did, a decline of nearly 50 percent. Moreover, the ponds themselves were disappearing.

“I remember standing there in the field,comparing the map of 1992–93 with the landscape in front of me and realizing the two were very different,” she says. “It was exciting, because I knew the information we were getting was important, but at the same time, it was very disturbing, because of the implications for the environment.”

Because the ponds surveyed were not fed by streams or rivers and were refilled only by snow melt, rainfall, and the local aquifer, the animals’ decline could not be explained by the usual factors—such as wells, irrigation, or dams—that can draw down water tables and change habitat in less isolated areas.

“The fact that we’re seeing this severe a decrease in an isolated area, in one of the best-protected areas in the country, which has minimal to no human development, implies that the effects of global warming are everywhere,” said McMenamin.

Amphibians are well-known indicators of climate change, according to J. Alan Pounds, resident scientist of the Tropical Science Center in Costa Rica. “We can expect mass extinction in amphibians and a wide range of other species, if global warming continues on its present course.”

McMenamin comes to her passion for science naturally. Father Mark is professor of geology and geography at MHC, and mother Dianna is a planetary geologist. The Cambrian explosion and evolutionary history were frequent topics around the dinner table as Sarah grew up, and she loved tagging along on her dad’s field trips. She spent a lot of time outdoors, frequently bringing home snakes and turtles.

Being homeschooled taught her the value of hard work and enthusiasm, she says. “If something sparked my interest, I pursued it. I learned to answer my own questions, and spent a lot of time in Williston Library, reading.”

When McMenamin entered MHC, she recalls being certain “I did not want to go into science. That was what my parents did, and I wanted to strike out on my own in some creative, artistic field like writing or painting,” she said. But an introductory course in biology soon drew her in.

“The biology department was extremely stimulating for a budding researcher, and … I was able to pursue research at a very early stage in my career. I was a TA for my adviser Jeff Knight and Craig Woodard for two semesters of their Genetics and Molecular Biology class, which was a fantastic experience,” she wrote in an e-mail. “I also spent two semesters doing independent research with [former faculty member] Diane Kelly.” Internships at the Howard Hughes undergraduate research training program at MHC in summer 2000 and at the NASA Ames Center in California in 2003 cemented her enthusiasm for research.

“The camaraderie of working with other people on a common goal is a very powerful thing,” she said. “There’s a sense of teamwork and a feeling of satisfaction you get when you ask intelligent questions and find out the answers. I was hooked.”

After graduating from MHC, she decided to explore developmental biology at Stanford. “Transitional states fascinate me,” she said. “Amphibians live compellingly distinct lives in adulthood and childhood, in water and on land. They inhabit a particular ecological niche, marginal areas that push them to modify and adapt.”

Biologist Elizabeth Hadly, McMenamin’s thesis adviser at Stanford, says McMenamin has all the characteristics of a dynamic scientist. “What makes Sarah so amazing is that she is intensely curious and totally focused on her subject, amphibians,” she said. “It can be a little touch-and-go when you put students in the field for the first time. Some are great researchers in the lab, and ask really good questions. But put them out in the field, where conditions can be iffy, and they fall apart. I think Sarah was terrified at first, but she absolutely fell in love with the work, started finding stuff, and never looked back.”

Since October 2008, when McMenamin’s paper on amphibians in Yellowstone was published in the Proceedings of the National Academy of Sciences, she’s become a bit of a celebrity. Newspapers and Web sites picked up the story, and she has been interviewed by USA Today, the BBC, Discovery, Scientific American, and ABC, among others. 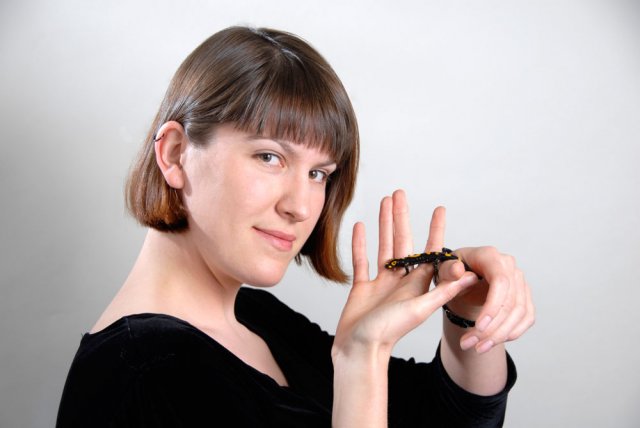 “It was exciting at first, but it certainly cut into my productivity,” she said. She may have to get used to it. Just a few months ago, on a routine field survey, she discovered a completely new type of salamander living in two Yellowstone ponds. She’s calling them “crystal salamanders” because they are completely transparent. “Sarah called me at home, she was so excited when she found them,” says Hadly. “Yellowstone has been studied up the wazoo, but here are these salamanders that nobody has ever known about. It makes the case for preserving this habitat even more compelling.”

Currently, McMenamin is collaborating with Pounds and Hadly on a chapter in an upcoming science publication and writing up her discovery of the “crystal” salamanders. And she successfully defended her doctoral thesis in May.

McMenamin says of her work, “Hopefully, as our and other research is publicized, and public awareness increases, we will become more sensitive to the needs of the populations we share our planet with. I think it will be very difficult to draft legislation that will effect real change, let alone find a way to implement it. I do know the solution has to be multifaceted, and come from a stronger sense of stewardship of the land and of the planet.”

This article appeared in the summer 2009 issue of the Alumnae Quarterly.

Read abstracts of 2009 MHC seniors’ research in the sciences. (Abstracts are sorted by department.)