Mercury Rising: What Happened When Lauren Smith Stirred Up the Mud 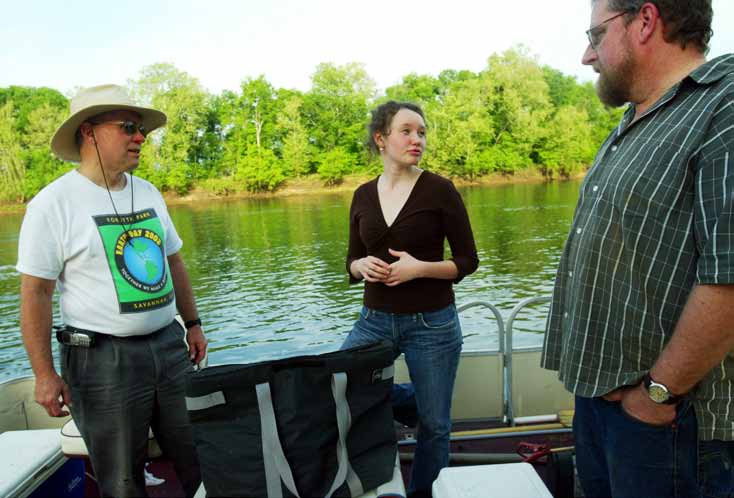 Like most waterways, the bottom of the Savannah River is full of dark, mucky sediment.

In 2005, when Lauren Wooten Smith ’11 got down and dirty to analyze what was in that mud, she discovered a toxic metal—methyl mercury—at more than 100 times the level considered lethal.

Muckraking wasn’t on her mind when she set out to measure the heavy-metal levels in the river near her Augusta, Georgia, home. As a sixteen-year-old looking to earn extra credit in a difficult high-school course, she designed a science-fair project to compare mercury levels in sludge samples taken from various spots along the river. Her discovery led to acclaim and a multimillion-dollar environmental cleanup—and some hard lessons about how complex a “simple” research project can become.

Smith learned that an Olin Inc. chemical plant had for years used mercury in its manufacturing processes and released 500 to 700 pounds of it annually into the Savannah River basin. Curious about the metal’s longterm effects, Smith wrangled a boat and sampled the river mud using duct-taped PVC pipes. To analyze the samples, she needed to use an environmental chemistry lab at a nearby nuclear plant. That required sitting in a classroom (with 100 male truckers!) to obtain special certification in nuclear safety.

What Was in the Mud

The National Oceanic and Atmospheric Administration says allowable levels of mercury in stream sediment can be from five to fifty-one parts per billion. Smith found samples with up to 62,000 parts per billion. “I was shocked,” she recalls. The daughter of scientists—her mother is a nurse and microbiologist, and her father is a physician—Lauren took science seriously and believed her results were reliable. But others doubted that one so young could have done the tests correctly.

Smith says, “Even after an environmental sciences PhD reran all my tests, and even though I was working in a government-certified lab, many people said, ‘Oh, she’s just a high-school student; these aren’t real results.’ It was a sad realization that the science didn’t speak for itself and that who I am had so much to do with how seriously the results were taken,” she says.

But when Smith’s findings were shared at regional, national, and international science-fair competitions, her work attracted attention. “It took media coverage to get the EPA to look into the problem,” she says. When they did, Smith’s findings were confirmed, and cleanup negotiations began among the plant, local government, and the EPA. Eventually, the Olin plant spent $3 million to encase the mercury-laden sediment already in the river channel near the chemical factory. However, the plant
continues to discharge mercury, legally, into the river. Olin is eliminating the use of mercury “over the next two years” at that and another plant, according to a December 2010 article. Olin plants are among the last in the nation to make chlorine using this mercury process. According to the Savannah Riverkeeper Web site, 90 percent of the chlorine produced in the United States is now made using a better, safer process, primarily membrane technology.

While all this was brewing, Smith graduated from high school and started her MHC studies, designing her own major in medical anthropology. For her senior thesis, “Embodied Consequences,” she took on a new aspect of the Savannah River project: the human impact of eating mercury-laden fish. “While I was gathering sediment, I saw lots of fishermen on the river,” Smith recalls. “I’d heard people say, “There’s no human impact of the mercury,’ but long-term, large-scale epidemiological studies make it clear
that thousands of children are born every year with adverse neurological effects due to mercury.”

Since the number-one way people are exposed to mercury is by eating fish, Smith set out to study the health of those who live along the river. And this is where the lure of natural science got tangled in sociocultural “fishing line.”

Here she was—a young, white, middle-class college student—trying to reach a group that was largely retired, male, poor, African American subsistence fishermen. Perhaps miscommunication was inevitable, but Smith didn’t expect the reception she got. “I walked along the river where people commonly fish, and asked people for hair samples,” she says. “One of the first things said to me was, ‘You’ve got to be crazy if you think I’m going to give you my hair. Don’t you know about the Tuskegee syphilis experiment?”

This kind of reaction was no surprise to Smith’s senior thesis adviser, MHC Professor of Anthropology Lynn Morgan. “Natural science is done by humans in a specific context, so it is invariably influenced by social, political, economic, educational, and media contexts as well as by the identities of research subjects and the researchers,” she explains.

Some feared Smith would use the hair samples to do drug testing; some community members practiced voodoo and believed that giving someone your hair gives them power over you.

Smith admits she didn’t have a truly representative test group. The people who agreed to donate hair samples tended to be white as well as wealthier and more highly educated than the average resident in that area—and more likely to eat sushi than river fish. For her control group, Smith used hair samples from a local barbershop. So the demographics of the two sample groups weren’t comparable. And, although she found higher mercury levels in the test group than in the control group, her small sample size prevented drawing broad conclusions.

She was on safer ground with the second part of her study—evaluating the effectiveness of “fish advisories,” government messages intended to inform residents how much of each local fish they can safely eat. Smith discovered that these advisories weren’t reaching the intended audience, for several reasons. The fish most often eaten weren’t always the ones tested. Advisories were often not posted at all, and when they were, not everyone could read them. And the “safe to eat” levels assumed people consume fish far less often than many families along the Savannah River actually do—typically twice or even three times a day.

At every turn, Smith discovered another issue. “Doing a senior thesis was a great learning experience,” she says. “Now I know how to develop a study for this population.” Adviser Lynn Morgan notes that, “By picking such a complex topic, Lauren didn’t take the easy way through her senior year. It’s a real testament to her courage and intellectual vision that she insisted on combining academic disciplines to achieve a more holistic and complex understanding of the effects of mercury contamination on ecological and social systems.”

From Fish to Breastfeeding

Now a graduate, Smith’s new direction builds on her previous work on nutrition in at-risk communities. Funded by a Fulbright grant, she left for Bangladesh this past summer to boost the number of new mothers who start breastfeeding their babies shortly after birth. (The sooner breastfeeding begins,the better a baby’s chances of survival.)

After the Fulbright year, she will begin an MD/PhD program, then do maternal and child health work internationally. That’s the plan. No doubt there will be unexpected eddies in the river of her career, but trust Smith to follow the current wherever it may lead.

This article appeared in the fall 2011 issue of the Alumnae Quarterly.

See a video about Smith’s work at mtholyoke.edu/news/stories/5682859.