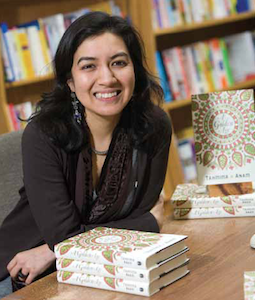 Author Tahmima Anam ’97 was recently awarded a spot on Granta magazine’s prestigious once-a-decade list of Britain’s best young writers. Martin Amis, Salman Rushdie, Pat Barker, and Jeanette Winterson (to name just a few) have been included on past lists. Born in Dhaka, Bangladesh, Anam has lived in Paris, New York, Bangkok, and London, traveling the world for her father’s job at UNICEF. After graduating from Mount Holyoke, Anam earned a PhD in anthropology from Harvard University and an MFA in creative writing from Royal Holloway, University of London.

Anam’s debut novel, A Golden Age (2007), was hailed by the New Yorker as “striking” and won the Best First Book of 2008 Commonwealth Writers’ Prize. While completing research for the novel, Anam spent two years in Bangladesh interviewing veterans of the Indo-Pakistani war, which left three million civilians dead. It’s estimated that sexual violence affected at least 400,000 women. A Golden Age follows the life of a young widow and mother of two in East Pakistan in 1971, the year the war tore apart what is present-day Bangladesh. In 2011 Anam published The Good Muslim, a sequel to A Golden Age, which was nominated for the 2011 Man Asian Literary Prize.