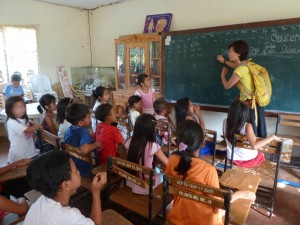 Where we end up in life, says Ayesha Vera Yu ’97, is the result of “our background…chance, and choice.” A former investment banker, Vera Yu is now the founder and chief executive of the nonprofit initiative Advancement for Rural Kids or ARK.

Ayesha lived in the Philippines until age thirteen, when she and her family immigrated to the United States. During a 2008 trip back to the Philippines, she saw the sad condition of the village of Sibariwan’s school.

“I saw three to four kids huddled around each textbook [and learned] that students barely come to school with food, much less supplies,” she says. Ayesha couldn’t leave without trying to help.

Above: Ayesha at a school in Sibariwan

Her initial donation inspired the community to band together to improve the school.

Later that year, Ayesha and ARK cofounder Jerry Topitzer (son of Pat Topitzer ’60) returned to Sibariwan with additional donations for the school. But the root issues, Ayesha realized, were “hunger and malnutrition.” The donated funds were used to institute what became ARK’s keystone feeding program. “This important initiative,” says Ayesha, “has proven to get kids back to school, fight malnutrition, and spur weight gain, while providing additional income to the local community.”

Ayesha says that she and Topitzer were disappointed with other philanthropic initiatives they had supported in the past. “We could not track our dollars,” she says. Through ARK, an organization staffed completely by volunteers, 100 percent of donors’ money goes directly to the village. Local parents and teachers give their own time and resources to stretch each dollar further and improve the quality of life within the community as well as the school.

Ayesha has left the corporate sector to devote all of her time to ARK. While the banking world sunk into a depression during the financial collapse, Ayesha focuses on positive initiatives. “Every day, I choose to partner with the community, keep kids in school, and grow ARK on a volunteer basis.”