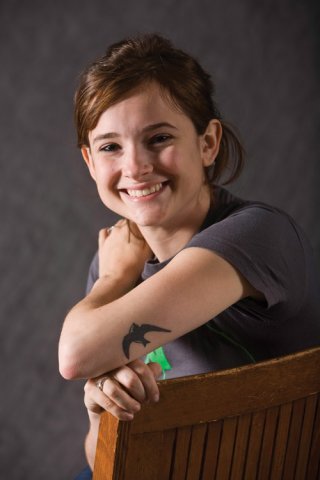 I got my first tattoo a month after my twenty-first birthday. I had been imagining it for six months and was ready. Or so I thought.

Having had surgery earlier in the month, I didn’t anticipate the pain being much of a problem. As soon as my tattoo artist-friend’s needle touched down, however, I was writhing in agony. I yelled louder than the TV I was supposed to be distracted by and ended up shaking in a cold sweat.

But the meaning of my tattoo wasn’t lost in those moments of concentrated pain. I focused on my tattoo’s story instead of the needle.

Before I could even talk, I would look at Audubon bird guides for hours. When I started talking, I could name most of the birds. My grandfather and I used to play a game in which he’d name the species of a bird and I’d find it in the book. That’s how I decided I wanted a bird tattoo.

I settled on an interpretation of a drawing by John James Audubon himself—Tachycineta thalassina, a violet-green swallow, a tiny songbird native to the West Coast. From my limited nautical knowledge (gleaned mostly from pirate movies), I knew that sailors got tattoos of swallows in hopes of seeing the birds while at sea. (Swallows meant that land was near, and they were that much closer to home.)

My swallow perches on the back of my arm, above my left elbow. I catch sight of it sometimes in the mirror—a small, dark figure with wings spread open wide—and am reminded that home, and my family, are always nearer than I think.

A lot of MHC women have stories like mine behind their ink. Traditions, reminders, and wishes are permanently recorded on their bodies, turning each inch of tattooed skin into a story and each body into a vehicle for a subversive form of visual storytelling. 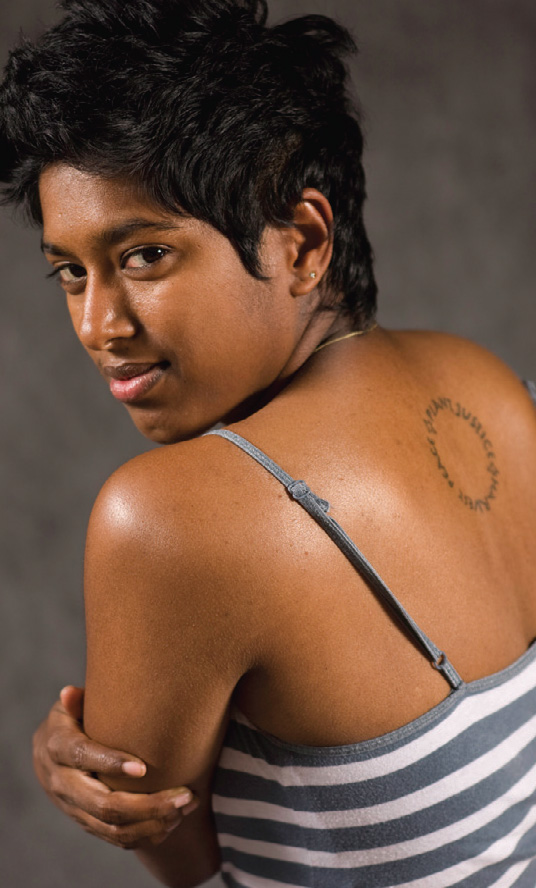 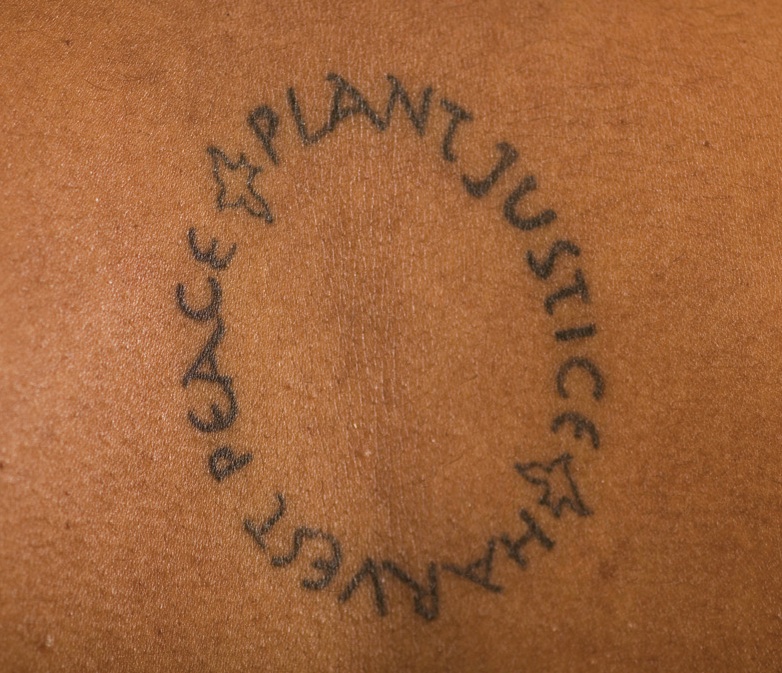 Amika Gair-MacMichael ’09 (above) decided to get a tattoo of the phrase Plant Justice, Harvest Peace “because I couldn’t stop drawing it. I would cover my notebooks with it,” she says. Gair-MacMichael chose this phrase because of her personal involvement in racial and same-sex rights campaigns. “I truly believe in its message and I would like there to be more social equality in the world.” 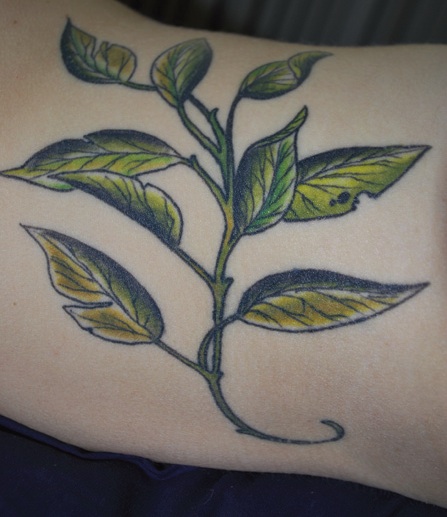 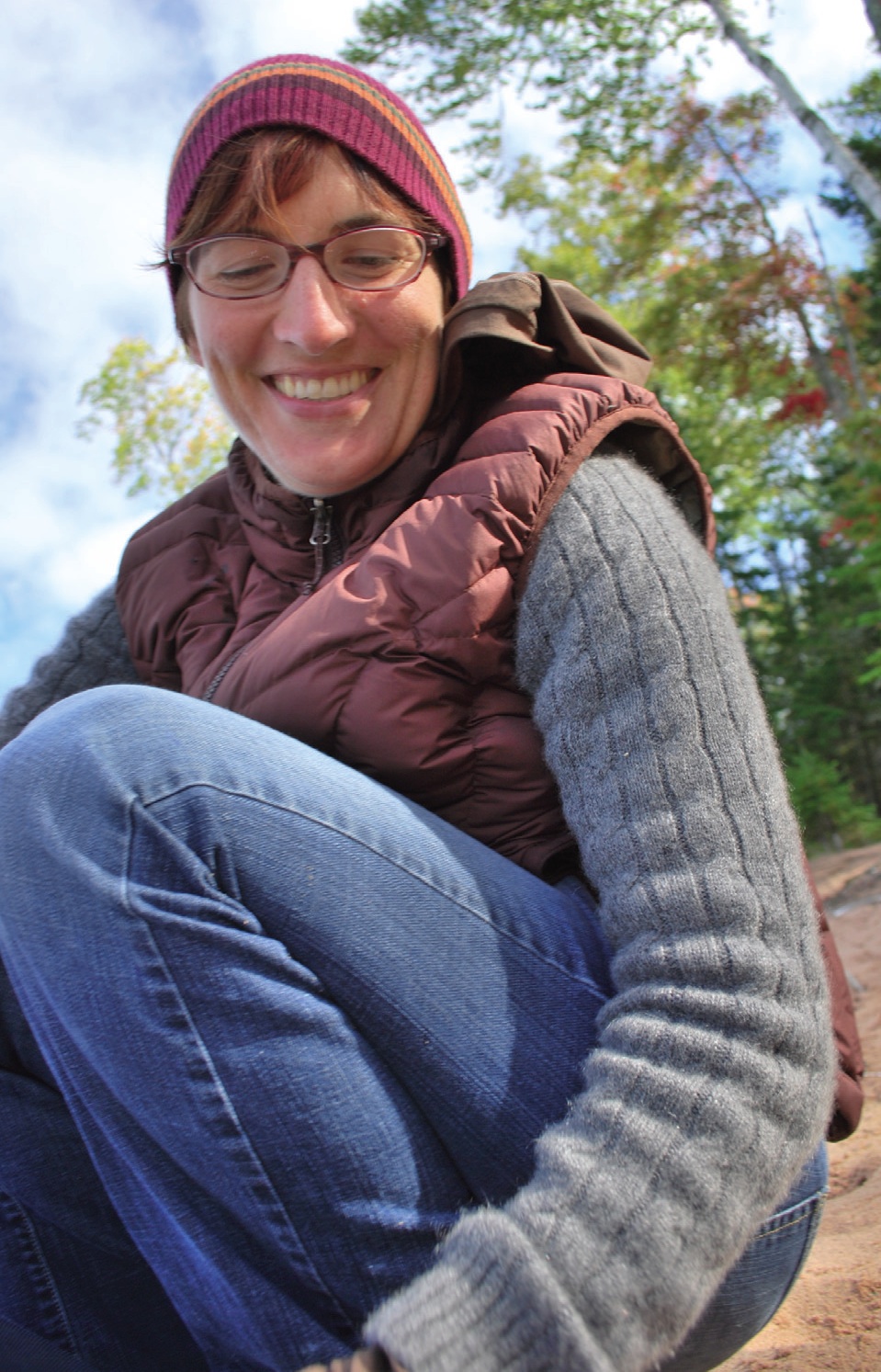 “Getting a tattoo is not something I thought I ever would do, but I decided to get one during my second year of law school,” says Carrie Ruzicka ’99 (above). “As any former or current law student can attest, law school is not a fun process. But I was not prepared to be so completely underwhelmed by the lack of vision and community that I experienced in law school.

“Without having Mount Holyoke behind me, I am not sure I would have had the confidence and the self-awareness necessary to make it through successfully and on my own terms. That is how I came to get my laurel chain tattoo, an extra reminder of who I am, where I came from, and where I am going. I currently only have one patch on my lower back, but I sized the tattoo so it can grow. Maybe one day my tattoo will drape over my shoulder like the actual chain I carried during the laurel parade.” 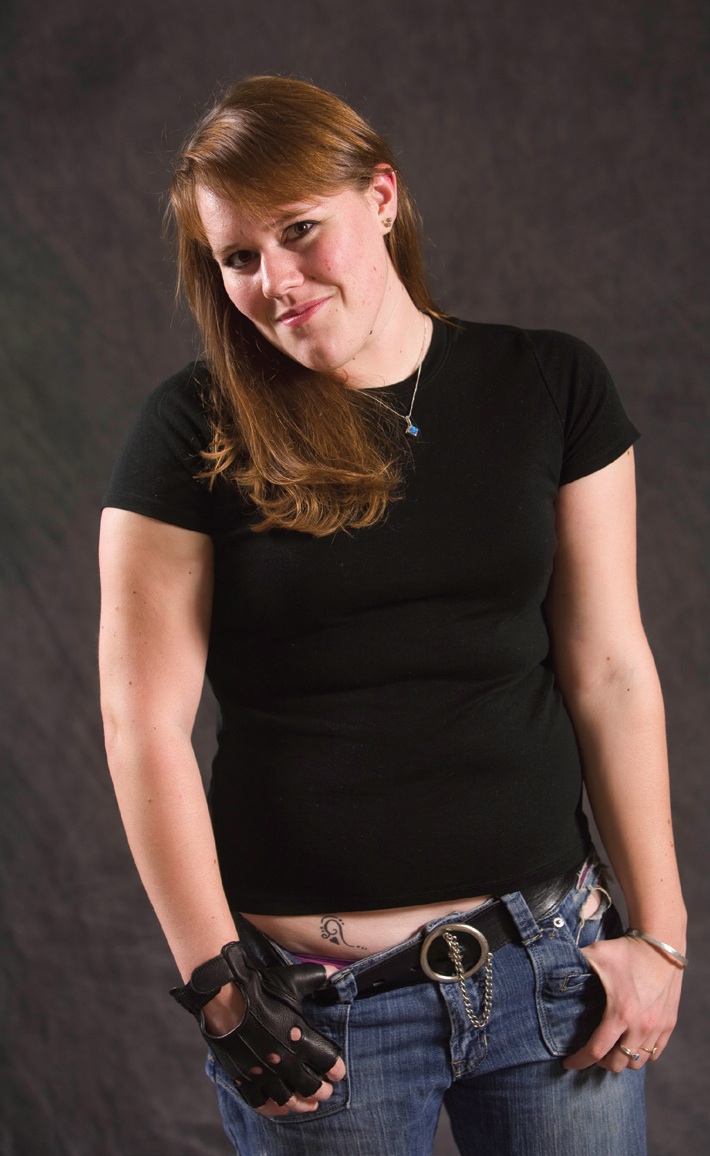 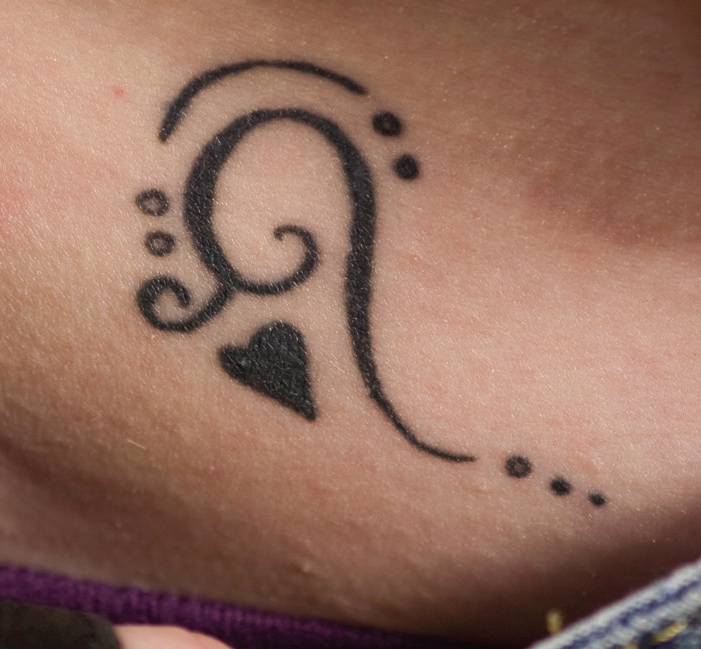 After losing one of her ovaries last year, Ryan Dorsey ’10 (above) had her roommate Caroline Heinbuch ’10 design a symbolic substitute ovary and fallopian tube.

After the surgery, Dorsey was left with only one functioning ovary and the possibility that she might not be able to have children. “I began to wonder, ‘What does it mean to be a woman?’” Dorsey said.

“In the end, I realized that being a woman has little to do with the parts that make up your body, or your ability to conceive and carry children. It is a way of looking at the world, a method of problem solving, and [is] so much a part of who I am that it can never be taken away.”

Her tattooed “ovary” is a symbol of the difficult year she endured and the answers she found. “Every time I see it, I am reminded that I am a woman, and by that token, I am beautiful. I find great joy and comfort in that now.” 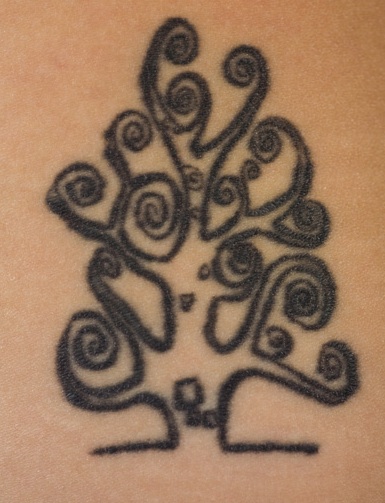 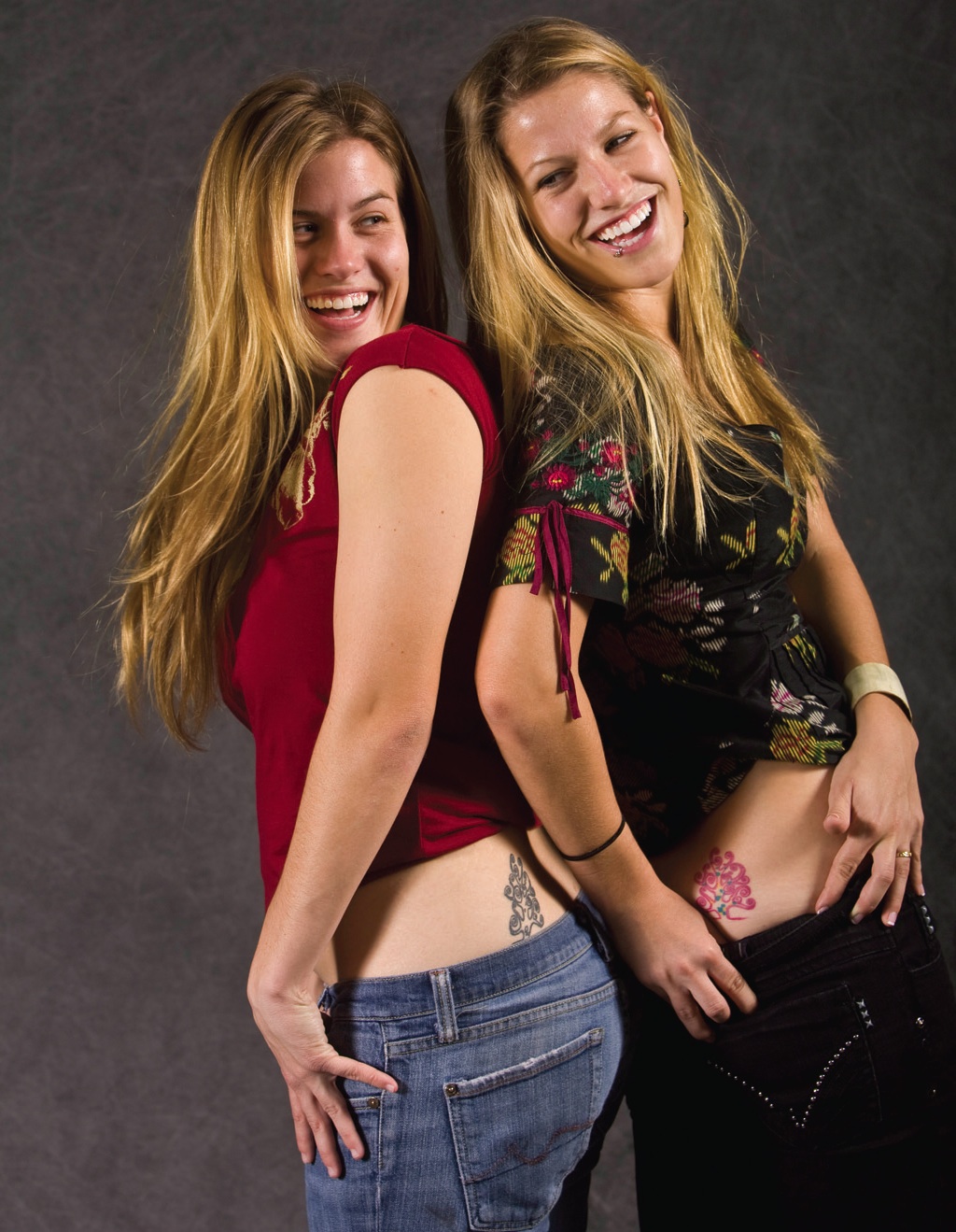 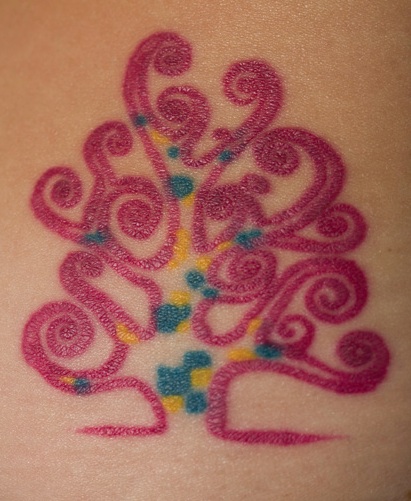 Twins Lauren (above, right) and Terry Orr ’10 (above, left) decided, along with their older sister Caitlin Orr ’08, to get the same tattoo.

“We thought we would design our own,” Lauren said, “but soon we all fell in love with the idea of getting an interpretation of Gustav Klimt’s painting The Tree of Life.” 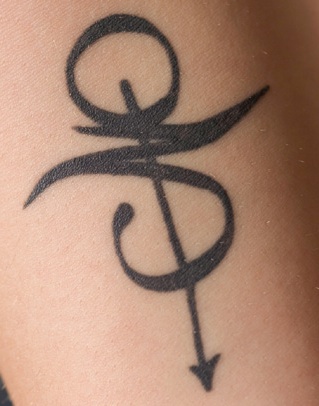 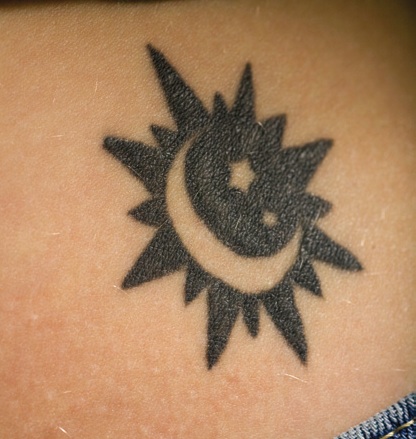 Meredith Spencer-Blaetz ’11 (above) knew her first tattoo would have something to do with the moon. “As a child, I would search the sky for the moon,” she said. “My mom tells me [that] I used to point at it from my car seat and say ‘Moon!’ Even today, I find that I have a weird [attraction] to it.”

Spencer-Blaetz also has a star on her wrist, in honor of her graduation from high school. “Tattoos are addicting … but I wanted to keep it in check. So I decided that every time something major happens in my life, I would get a star somewhere. Who knows what this life will bring me?”

Bridgette Whitcomb ’09 (above) has Celtic, Hopi, and Lakota symbols tattooed on her lower back. “They are all symbols of family, fertility, or home,” she said. “I had these tattoos done to never forget to go back to the reservation. They remind me that I must go back to Pine Ridge.” Whitcomb spent six summers living on the Pine Ridge Indian Reservation in South Dakota, visiting friends and family.

She said the Lakota turtle holds the most importance for her. “It is my compass,” she said. “I was worried that I would get disillusioned with the East Coast and forget to go back to the ‘rez.’ I put this on my body so that I would always remember what is important in life and remind me to return home.”

She’s applying for an urban education fellowship, and plans to teach on the Pine Ridge reservation. “I do not want to be a teacher for the rest of my life, but that is the way I see that I can help now,” she explained. “I want to improve the conditions in which people are forced to live.”

Piano player Martha Streng ’12 describes what inspired her wrist tattoo (above): “I knew I wanted a tattoo that had something to do with music, because music is the biggest part of my life.” Her friend designed a heart formed by a bass clef and an upside-down treble clef. “I really loved it,” Streng said, “because it wasn’t a perfect bass clef and treble clef; they were a little more rough and block-like. I hate perfect clefs. I would never want one as a tattoo.”

As far as placement of her ink, Streng said, “Since I have really small hands, I’ve faced a lot of difficulty playing certain pieces.” Putting the tattoo on her wrist was “my way of saying, ‘Yeah, I have little hands. I’m owning it.’”

“Japanese culture is extremely interesting and intriguing to me,” says Amanda ’10 (above; last name withheld by request). Five kanji symbols are tattooed above her hip, representing youth, dream, strength, loyalty, and wind. “The five symbols represent me,” she said.

Margot Wade ’09 (above) had two Spanish phrases tattooed on her ribcage when she turned eighteen, part of coming to terms with her father’s death. Translated, the text reads, “Because we are also what we have lost,” and “Detached from the vaults of Heaven and falls to the earth.” “I got my tattoo in Spanish to remind me not everything is lost in translation, that not everything is lost in the darkness,” she said.

Lynn Tylec ’11 has two roses tattooed on top of her foot, along with the date of her grandmother’s passing.

“One rose is purple, because purple is the color that symbolizes pancreatic cancer,” Tylec said. “The other rose is yellow. My grandmother struggled with weight for years, and she was in a weight-loss group called Take Off Pounds Sensibly. The yellow rose was rewarded to someone who reached their ultimate weight loss goal, which my grandmother did shortly before passing away.”

Caity Bryant ’11 (above)has a sketch of an apple tattooed on her wrist “because I want to be a teacher,” she said.

Kylie McCormick ’08 chose to get tattoos (above) of one of her favorite subjects: dragons. The red “wyvern familiar” is on the back of her arm and shoulder. “I wanted a tattoo to represent the one kind of dragon that could actually be in existence today, which is a wyvern—two legged, two winged, no arms,” McCormick said.

The second dragon is a purple “Ouroboros” intertwined with a yin/yang symbol. “The Ouroboros is an alchemical symbol of destruction, chaos, peace, and transformation. The yin/yang is an Eastern symbol of balance,” she said. “I think they go quite well together.”

Abby Wall ’12 (above) had Kurt Vonnegut’s famous saying, “So it goes…” tattooed above her hip in honor of her uncle’s passing.

This article appeared in the spring 2009 issue of the Alumnae Quarterly.

42 responses to “Tattoos: Stories in Ink”