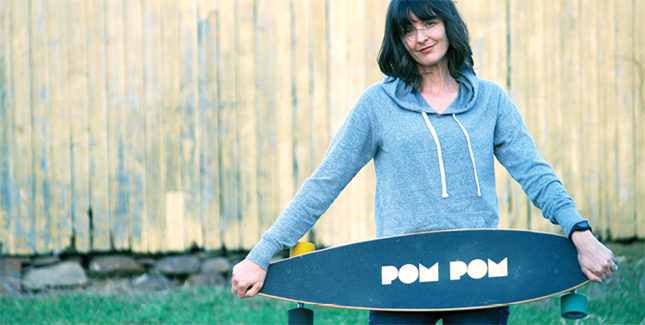 Sarah Strebel Cameron ’97 is no stranger to taking risks, but her biggest adventure came in 2008 when she founded her own company. Upon realizing that most skate, snow, and surf wax brands target men and boys—through brand name, packaging, graphics, or marketing efforts—Cameron launched POM POM (iheartpompom.com), the first wax and accessories brand for girls. The brand soon attracted female surfers, snowboarders, and skaters to its sponsored teams. In February 2015, POM POM teamed up with Made In Mars Inc.—a Los Angeles-based action sports gear manufacturer—to create a line of skateboards, longboards, and cruiser boards for girls.

On why she started POM POM:

Women and girls are the fastest-growing segment of the skateboard market. But too many companies address girls by “pinking and shrinking” their assortment of products, or adding a “girls” tag. All this really does is reinforce that the original brand was never intended for girls. My husband started Magical Go-Go—a skate wax company—in 2003, and we worked on it together; that was when I decided I wanted to have a brand that focused on girls.

On her journey to starting a business:

I have always followed my passions and never been afraid of rejection. During my senior year at MHC, I started my own greeting card company, which later led to developing it into an animated preschool property for television. That project never came to fruition, but I learned a ton from the experience, and it sparked my entrepreneurial journey.

I’ve never been satisfied with the status quo and have always had ‘side projects’ going on, even while I was in law school.
Sarah Strebel Cameron ’97

On her love of adventure:

I’ve always been a big fan of spending time outdoors, being active, and challenging myself. My love for standing sideways first began on a Back to the Future skateboard that I bought at a neighbor’s tag sale. After skiing since I was four years old, I took up snowboarding my freshman year in college and was hooked. Then, after meeting my husband, I learned to surf and bought my first dirt bike.

My experience at Mount Holyoke strengthened my independent drive and helped me realize a passion, follow it, and see where it would take me. Thankfully, I’m still on that journey today. I learned that life is too short to not take chances. Keep exploring until you find what drives you; there’s something to be learned from every experience. Surround yourself with positive people who challenge, motivate, inspire, and support you. (For me that includes philosophy professor Lee Bowie!)