The Life of the Hands: Does Hands-On Work Mean Leaving Brainwork Behind?

So you think grad school’s difficult? Try lifting fifty-pound bags of flour; or climbing a ladder in the snow to work on electrical lines; or repeatedly cutting and gluing pieces of wood and leather to make a musical instrument. Sometimes the life of the hands is just as challenging as the life of the mind.

With a hardhat, drills, wires, and other apparatus, Claire “Cruz” Ricker ’95 gets downright dirty every day. She’s definitely not your average Mount Holyoke alumna. Ricker is a licensed journeyman electrician. When other alumnae hear this, they usually say, “How cool!” and ask for her card.

The route to her goal was not an easy one, though, and included far more years of training than for those in other, more white-collar, fields. Five years total, to be exact. Five years of working three jobs just to earn journeyman status—only to be laid off. “Most people who go to school for five years get called doctor when they finish,” she joked.

Working in a traditionally male-dominated field and taking in stride the culture that comes with it, Ricker is no joke. “There is an incredible amount of judgment and prejudgment of women on the job site. It’s a tough road for a woman,” said the Jamaica Plain, Massachusetts, resident.

This tough road was not always a dream for Ricker, who majored in American history at MHC. She studied hard, but never found in college what she wanted to pursue in life.

To pay the bills after graduation, she worked in retail, at a nonprofit, and as an emergency medical technician. Then, in 2000, she answered an ad for a carpenter’s apprentice. Being an apprentice wasn’t easy, and the pay was pitiful. “My first year, I worked as an apprentice, an EMT, and for a friend in construction, just to make ends meet,” she said.

After being told she was good at electrical work, she switched from carpentry to seek an electrician’s license. But that wasn’t all glory, either. Although she has always been “out” about her sexual orientation with her crew, Ricker was victimized on a larger job when her hardhat was vandalized; someone wrote “fag bitch” on one side and “dyke” on the other.

“My father told me I should wear it that way,” she said, noting she never felt unsafe and that probably someone was upset that a woman was on the job. “You must advocate for yourself, but it’s a fine line. You have to be one of the boys, while never being one of the boys. I have managed to find a balance.”

But nothing beats being in the union, she added, where she has been since 2002. The benefits are amazing, including full health coverage while she’s unemployed. She also gets professional development opportunities such as classes at Wentworth Institute of Technology, where she earned a certificate in construction management.

When she was laid off, Ricker was told a few times, “If we have a job where we need a woman, we’ll call you.” She said that is just one of the ways sexism is blatantly obvious. “Why ‘need a woman’? Why not just ‘need a job done’”? she asked.

Right now, she is on the union’s out-of-work list, along with 1,800 fellow electricians, and her priority is to get a job, any job. That’s not stopping her from considering her future, though.

“I was approached by another member to take on the state senator in my district, and I’m considering it. I’m also very interested in grad school,” she said, adding that she’d like to go into urban planning. “I’ve seen how [structures] get built and by whom, but now I want to know why and I want to be a part of it.”

When asked whether she feels her career is a cheat to her Mount Holyoke education, Ricker replied no. “I ask myself that sometimes, when I’m on a ladder in the snow … knowing I went to the best liberal arts college in the country … I don’t think I would have been able to stick with it, if I didn’t have the Mount Holyoke ‘cando’ attitude. Then I wonder, ‘Why can’t I translate that to my field?’” 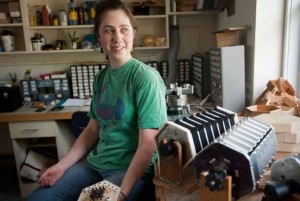 The hand-held instrument is small for the size of the melodies it produces, but it takes days of work to craft a single one. For Marga Hutcheson ’08, it is her life and her job. She makes concertinas, cousins to the accordion.

“My current job is pretty out of the ordinary,” said the Amherst, Massachusetts, resident. Hutcheson is the second-most- junior employee at The Button Box in Sunderland, Massachusetts. Although the business makes, sells, and repairs concertinas and accordions, she works “almost exclusively in constructing new instruments.”

Hutcheson’s days often look the same, and her hands definitely get a workout. “The work is quite repetitive and involves lots of cutting and gluing leather [to make the bellows], hammering, putting in springs, and sanding wood,” she said. “I use chisels, tweezers, hammers, electric sanders, and sometimes the drill press or band saw.”

Unorthodox as her job may be, she still manages to balance intellectually her MHC education with her blue-collar work, and feels her current job “is actually quite an appropriate next step after MHC. There certainly are times when I have to use my intellect quite a bit. I am always thinking about how I can make things more efficient, and occasionally I get to be inventive and figure out how to do something new.”

The young alum likens the repetitive nature of her work to meditation. “Having work where I often do not have to think allows me to reflect on the various mental states that arise, and to cultivate my ability to keep on returning my awareness to the handwork I am doing and to my breath … At Mount Holyoke, I studied religion, especially Buddhism … This experience has helped me turn what could have been a boring job into a fruitful, almost spiritual practice,” she said.

An environmental studies major at MHC, Hutcheson said she feels “grateful … to be working at a job that I feel is fairly good, from an ethical standpoint. I am working for a small, local company, making something that people hopefully will not just consume and throw into a landfill,” she said.

Hutcheson’s MHC friends are “generally pretty positive about the work I do and see its value,” but she admits she has felt “a bit inferior for not being in grad school or ‘knowing what to do’ with my life … I probably won’t be a concertina maker all of my life. I am grateful to have a job that uses different skills than those I was learning at Mount Holyoke, but that also has some continuity with what I was doing at MHC.” 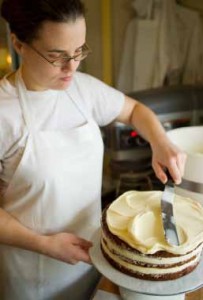 Carefully scraping the last bits of dough from her mixing bowl, Kirsten Baumgartner Stetler ’96 makes sure not a single chocolate chip goes to waste. It may be her 300th batch of cookie dough, but she wouldn’t trade baking for the world.

“There is … something soothing about repetitive work. When you get in a zone, you don’t have to think about what you’re doing anymore and your mind is clear; that’s really nice,” said the Vermont resident.

Stetler, who left Mount Holyoke midway through sophomore year for financial reasons, said, “I had a great experience at MHC, but it was too brief. I wish I could have stayed longer because I’m sure I would have benefited more.”

After leaving MHC, she first went home to Philadelphia to earn money to finish school. Her interest in photography blossomed, and Stetler finished her degree at the Art Institute of Boston (AIB).

“I decided to study photography because it was something I enjoyed doing, and I knew I needed to get my bachelor’s degree. I didn’t think much about a career path at that point because, after several years of trying to finish college, that felt like my career,” said Stetler.

After graduation, she took a job in the Student Services Office at AIB, and “ended up on a ‘cubicle career’ track … I never pursued a career in photography because it was very personal for me, and I didn’t want to lose my enthusiasm for it by making it my job,” she explained.

But something about cubicle life didn’t sit well with her. “I was feeling unhappy being in front of a computer all day, not doing anything creative, and I didn’t feel I was really helping anyone or contributing anything to the world. And spending half of your waking hours doing something you don’t enjoy is such a waste. I decided that if I had to work … I would rather spend that time doing something I enjoy,” she said.

Baking fit the bill. “I chose baking as a career because I have always enjoyed making bread, and working with yeast just fascinates me. As a living organism, it’s so interesting; there’s nothing else like it in cooking. I loved baking at home and wanted to learn more, to master it. Even though I’m done with school, there is still a ton more to learn about bread and yeast.”

So last year, she and her husband picked up, packed up, and moved to Vermont so that Stetler could enroll in a baking program at the New England Culinary Institute; she graduated earlier this year. After finishing an internship, the Vermont Cake Studio in Waterbury employed her as assistant pastry chef. So far, she loves it.

“Everyone I’ve told about my career change has been enthusiastic,” Stetler says, and some confide that their own secret ambition is to be a baker. Working for half her previous salary and at the bottom of the pay scale, since she’s new to the field, Stetler says she still makes a living and that the tradeoff is worth it for the enjoyment and the career possibilities baking provides.

“Definitely the hardest part of my job now is the physical labor, just being on my feet all day, lifting fifty-pound bags of flour, rolling out croissant dough for pastries that take all day to create. The good part, though, is that at the end of the day, you really feel like you’ve worked,” she said.

Her creativity and hard labor shine through when a customer wants a cake in the shape of something off the wall. “Sometimes I will discuss how the idea could be executed with my boss … Or I’ll look online for photos of what other people have done, or just Google ‘pterodactyl,’ so I know that I’m accurately representing the thing they want on the cake,” said Stetler. (Yes, she did design a pterodactyl cake.)

But just because she chose a career in the kitchen doesn’t mean her education went to waste. “I don’t think there’s a hands-on job that doesn’t involve the intellect, unless maybe you’re in a factory just pushing a button all day. Baking is a science; you have to understand how it works to be successful. If a recipe doesn’t come out right, you need to be able to figure out chemically what went wrong and how to fix it,” she said.

IS YOUR COLLAR BLUE TOO?

Share how you work with your hands at alumnae.mtholyoke.edu/hands_on.