Also referred to as Gracious Living or simply Gracious, Gracious Dinners were held every Wednesday night and Sunday afternoon in the residence hall dining rooms and were more formal than other meals. First-year handbooks throughout the decades specified that the dinners were by candlelight and followed by tea or coffee in the living rooms. Students were encouraged to invite faculty and staff members to dine with them. President Roswell G. Ham was a frequent Gracious Dinner guest. Students were expected to dress formally, with stockings and heels required. By the 1980s, the dress code was dropped, and Gracious Dinners became special occasions throughout the semesters.

Twice each semester around holidays, the Dining Commons is transformed for Gracious Dinner with string lights and ice sculptures. Gracious Dinners are announced with flyers at the Commons entrance. Faculty and staff members often attend Gracious Dinners with their families. Dinners are still candlelit affairs, with a candle and tablecloth on each table throughout the Commons. Students eagerly await these evenings, which offer a special menu showcasing locally sourced food, such as roast prime rib from Austin Brothers Valley Farm in Belchertown and mashed potatoes from Jekanowski Farms in Hadley. 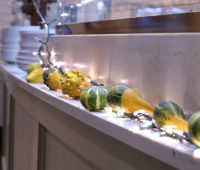 Watch a video of a Gracious Dinner in the Dining Commons.
Web Exclusive

This article appeared as “Gracious Dinners” in the winter 2020 issue of the Alumnae Quarterly.