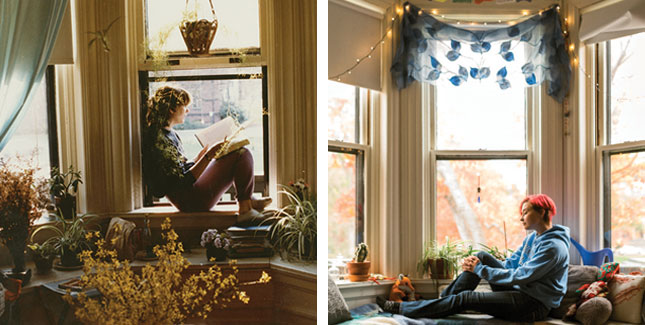 Lots of people had mini TVs in their rooms. We watched bad movies and soap operas (especially the escapades of Luke and Laura on General Hospital).

We decorated our rooms with Marimekko prints, posters, lots of albums, comforters, and stuffed animals. My senior year I painted my walls with phrases and slogans. After graduation I got a notice from the College that if I didn’t wash it off I’d be billed to repaint it! I did my best, but I ended up having to pay anyway.

There were smoking rooms in the dorm, but they weren’t very nice so people just smoked in their own rooms. It’s a wonder the place didn’t burn down.

There was always music blaring, except during study hour. Even then, we still played music until someone complained and the RA would ask us to turn it down, which we did . . . for fifteen minutes. If you really wanted to study, you went to the library.

Everyone showed up for M & Cs, mostly in their Lanz nightgowns. People stayed and hung out, talked, and ate until they locked the food back up.
—By Kathryn McHugh ’84

Most people just use their laptops to watch TV, although some people have an Xbox or PlayStation as well.

My walls are decorated with twinkling string lights, posters of the X-Files and Lord of the Rings, art prints, and drawings. Other people hang tapestries, artwork, or photos on their walls. A lot of us go to IKEA or Target to “pimp out” our dorm rooms. Some bring life into their rooms with plants and betta fish—many first-years have picked out a baby spider plant only to find that six months later the thing is huge and producing babies of its own.

We don’t have smoking rooms any more, and there are signs everywhere warning that you’re not allowed to smoke within twenty feet of any building. Not that people pay much attention to that! But smoking cigarettes is definitely not as big on campus as it used to be.

Most dorms remain pretty quiet even during the weekend. Lots of people go to the library to study, but they also work in the common and computer rooms as well as in their own bedrooms.

We still get our M & Cs in our pajamas, which range from onesies to the old standby of boxers and an athletic shirt.
—By Rowan Collins ’18 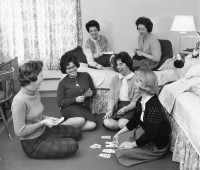 A Look Inside Student Rooms