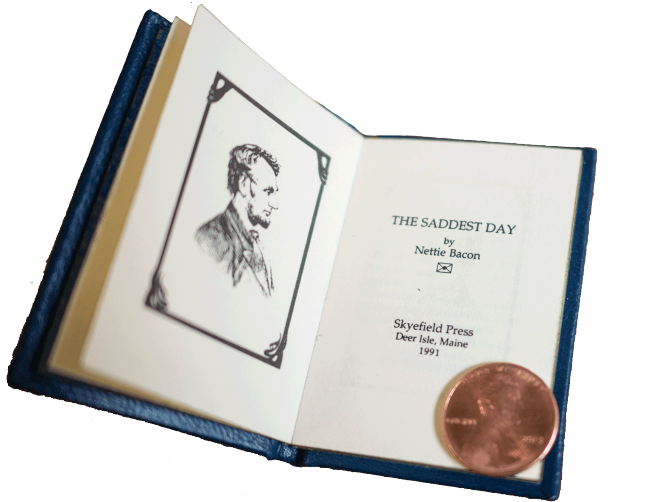 On April 15, 1865, Nettie Bacon, class of 1866, was traveling back to South Hadley after a holiday when she learned of President Abraham Lincoln’s assassination. Over the course of the next few days, she composed a letter to her brother, Alonzo, chronicling the reactions of those at Mount Holyoke, as well as her own emotions. More than a century later in 1991, Skyefield Press found Bacon’s letter in an antique shop and printed it as a small, art booklet. Below is the letter from the editor at Skyefield that prefaces Bacon’s letter.

» Read the more about the letter in, “On Display: The Saddest
Day,”from the winter 2015 Alumnae Quarterly.

Letter from the Editor:

In 1865 Nettie Bacon, an Ohio girl, was in the senior class at Mount Holyoke Seminary in South Hadley, Massachusetts. She was returning to the Seminary in a public carriage on the morning of Saturday, April 15, when word of President Lincoln’s assassination reached New England.

At each town fresh details and rumors unfolded amid the confusion. That evening she recorded her thoughts and feelings in a letter to her family at home. The unfinished letter lay untouched on Sunday. On Monday she wrote the final pages and posted the small envelope on April 18. Skyefeld Press discovered it in a pack of old papers in a shop on the coast of Maine and purchased it. We take pride in preserving and sharing in printed form this small piece of American history.

Today has been I believe the very saddest day this nation ever saw.

I have seen many strong men weep—like children over the untimely death of our dear President. I was returning from Williamsburg this morning, in the hack, when we received the startling announcement that the President was assassinated.

At first a faint hope that it might be a mistake flitted across our minds but soon the painful fact that it was official and that Hon. William H. Seward was at the same time assassinated in his own house was made known to us. Pen can never express the feelings of the Northern people at this sad news. What is to become of us! God can only tell.

I have seen many strong men weep—like children over the untimely death of our dear President.

The good news we have had so lately has illy prepared us for this great below, I am afraid. The war is farther from its close than we have thought. We were expressing our regrets and lamenting over the sad news in the stage when I saw one of the ladies who sat on the back seat laughing and tickling herself over our calamity.

I know she was just as glad as she could be that Lincoln was dead. She did not say a word. She knew it was not safe for her. I do believe we should have had a pitched battle if she had opened her mouth.

When we arrived into Northampton we found the stores closed and draped in mourning —flags hung at half mast —and striped in black, bells tolling—people all excitement. Just after I arrived they received a telegram that there was still some hopes of Seward & Sons but that the President died at seven. Later in the day we heard of the death of Seward & one of the sons. Is it not strange that such a plot could be carried out by two men singlehanded and alone? There is no treatment bad enough for those traitors. They need hardly expect much levity to traitors now at the hand of our new government.

(Monday morning) The Sun has hidden his face as if he could not bear to look upon such scenes of bloodshed & crime as have been perpetuated in our own free America for the past two days. But this morning he has risen clear & in all his candid brilliancy as if to clear away the clouds from our hearts as well as from the skies & bid us to look to God for support “who doeth all things well.” It seemed more in keeping with our feelings that Saturday and Sunday should be cloudy but our news this morning is a little more favorable. The morning papers say that both Sec. Seward & his sons still live.

Friday was a great day of rejoicing here & I suppose it was with you. Flags were raised—Salutes fired—bells rang out merrily, speeches made. Indeed, all were jubilant over the good news so lately received but how differently Saturday morning was ushered in. Bells toiled long & mournfully. The faces which only yesterday wore such a hopeful and cheerful look are today flooded with tears.

We had a very sad yet exceedingly interesting time at church this morning. The church was draped in mourning & Mr. Mead never spoke so well. The text was found in Lamentations 5-15: “The joy of our heart has ceased, our dance is dimmed into mourning.” It is said that at their merry making on Friday at South Hadley, just after they finished their speeches & were about to leave, the rope broke and the flag fell to the ground. Several ladies hoped then that that was not an unfavorable omen & now firm believers that it was.

“
And will our government after such treatment of our noble braves be so lenient? It must not be.
”

I am fearing that we shall have more of this dreadful work before long, since it was plotted to put an end to the lives of the whole cabinet, but I must write no more about this although I can think of nothing else it seems to me. When I went to Williamsburg, I saw another poor victim of the rebels— a solider who was just from the Andersonville prison where he had been one year. Just a shadow of him was going north to surprise his friends. He was the only one left of a large number, the rest of whom had died of starvation—said he had not tasted meat since last May —was kept on one pint of meal without salt per day—& perhaps once a week 3 small spoonfuls of beans or rather peas, dried. And will our government after such treatment of our noble braves be so lenient? It must not be. I hope President Johnson will show himself a man, see that himself, Grant & the Cabinet go well guarded, and haste themselves to administer justice to these Barbarous Rebs north & south.

One Copperhead in Springfield, Mass., was uttering some treasonable sentiments, such as joy at President Lincoln’s death, but soon found himself surrounded by about 600 men who had determined to tar & feather his principles out of him. But city authorities sent him to his home hoping to quell the excitement. The crowd followed him to his house, made him kneel upon his piazza, hold up his right hand & say he was sorry. After he had said that, they were not satisfied but told him to say it from the heart.  “I do. I do” was the trembling reply. It was doubtless only fear which made him do it. I wish every such man north or south was branded with the name traitor on his forehead in large letters & sent to Van Diemen’s Land—there to stay as long as they breath a breath of life & so have just as much to eat as the rebs have given or poor brave boys. I fear this letter contains sentiments which will send me to Castle Thunder when the reds get jurisdiction in the N. States.

I had a delightful time at Williamsburg. Mrs. Hawks lives in a most elegant house and furniture to match. She did all in her power to entertain me. Made a tea party for me on Friday afternoon & invited an old friend of mine who had formerly been at the Seminary. Sent Mr. Hawks after her with a livery team. I never had seen Mr. Hawks before. Like him much. He will most deeply lament this news when it reaches him as it probably did soon after I heard of it.

Ways are often opened where we least expect it. These are wonderful days. God is leading us as a nation and as individuals & we must follow where he marks out our path. See what a great man our President became out of a mere rail splitter. He had not many advantages but his name now stands next to Washington’s on the pages of history—or will. Let us try each day to perform the particular duty of that day, leaving the issue with God. I never so fully realized the instability of all things earthly as now. I do not know what we are all coming to.Alonzo, you wrote me some time ago asking my advice but I do not know what to say to you. I think it rather dangerous business in these days to advise others. I am sure you will be better suited in after years if you decide not to suit your own self. I am very anxious that you should get an education. I shall always be disappointed if you do not—but as to what is best to do now, I am incapable of judging. You must do what you consider your duty after giving the matter much thought & I pray God will guide you. It has looked very favorable about the war’s closing for some weeks past & I have hoped someone might come home to relieve you but we can’t tell.

I wish I could think of something interesting to write but my brain is in too confused a state. I don’t know whether I told you that I got along admirably for me in the examinations I so much dreaded. In Havens Phil., Miss Earle said no senior class ever did better. Did my bird get entirely away when he got out into the orchard? What does Pa say about this crisis?

Tell Pa that another five dollar bill will be very acceptable soon, as I do not want to get low. I hope someday to be able to cease begging. Much love to all of the friends. Write very soon.

Your affectionate sister. Be good—be good.