The Megatherium of Clapp Lab 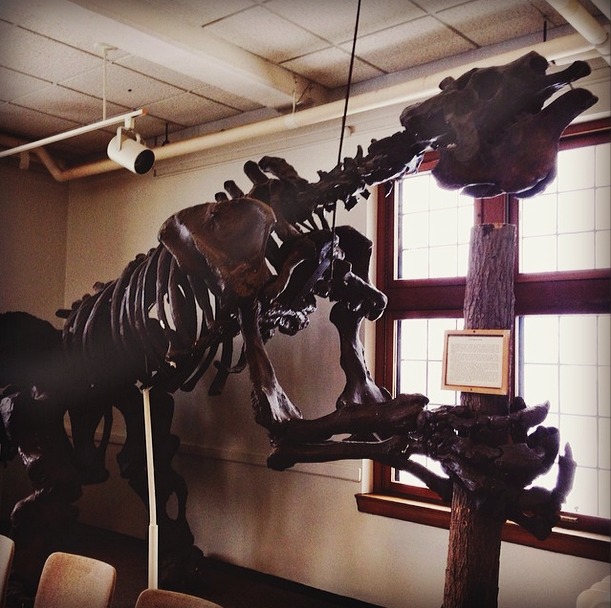 Climb to the fourth floor of Clapp Laboratory, and you’ll be confronted by a skeleton made up of what many initially mistake to be dinosaur bones. Look a little closer and you may begin to recognize the rounded snout or the long claws that tightly grip the branch of a tree. The Megatherium was a genus of elephant-sized ground sloths (related to the modern sloth) that existed during the Pleistocene epoch, 2.5 million to 11,700 years ago. Weighing up to four tons and measuring
twenty feet in length from head to tail, the giant
sloths were native to Central and South America.

In 1875 Mount Holyoke sought to furnish the newly completed Williston Hall with a “Geological Cabinet.” Alumnae raised $1,800 for the purchase of the Megatherium skeleton from Henry Augustus Ward, a professor at the University of Rochester who founded Ward’s Natural Science, an enterprise that collected specimens from all parts of the world. For several decades, Williston Hall contained one of the largest natural history collections of any college in the country. Three days before Christmas in the winter of 1917, Williston burned to the ground, and the skeleton was one of only a handful of the specimens that survived.

It wasn’t until 1974 that two students found the bones of the Megatherium in a closet in Safford Hall, where someone had stored them for safe keeping after the fire and presumably forgotten about them. As a Winter Term Project in 1975, under the supervision of biology professor Curtis Smith, the skeleton was repaired and reassembled and has been on display in Clapp ever since. Today, professors use the Megatherium and other specimens from the College’s collection to teach about mammalian evolution.

4 responses to “On Display: Slothing Around”