Voices at the Table

When it comes to diversity, Mount Holyoke leads the way in providing an education to students from countries around the world, fostering an academic environment that not only gives opportunities for students to learn from one another in the classroom but prepares them to graduate and become citizens in an increasingly global world. 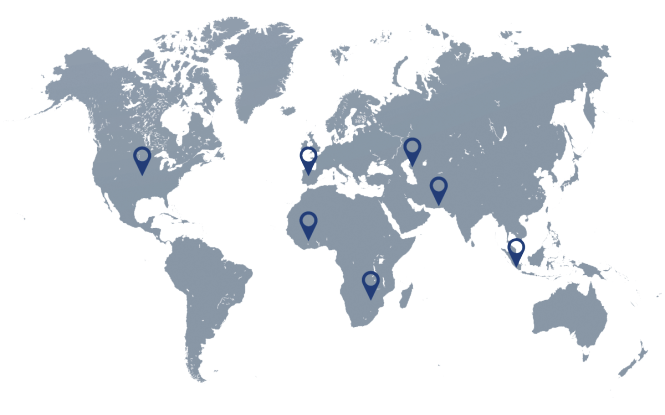 “No student ever speaks or should be asked to speak for her country,” says Eva Paus, professor of economics and the Carol Hoffmann Collins Director of the McCulloch Center for Global Initiatives. “But students inevitably bring to [classroom] discussions experiences and perspectives from different cultural/political/economic contexts, and as a result all the students develop a much more complex, nuanced, and deeper understanding of the issues at hand.”

Paus, an expert on economic development who has published widely on the topic, fosters cultural exchanges around the table of the senior seminar that she teaches each year. “The impact of international student diversity on learning outcomes can be profound,” she says. Last spring her twenty-three students represented fourteen nations, an impressive number and yet only a fraction of the eighty-three countries represented by the current student body.

Read about the accomplishments of Mount Holyoke international alumnae through history.
Web exclusive

Mount Holyoke has valued diversity since its inception, long before bringing international students to campuses became the trend in higher education. The College’s commitment to educating students across nationalities has set it apart, even among women’s colleges, known historically for supporting diversity over their peer co-educational institutions. According to the Institute of International Education’s 2012–2013 Open Doors Report, five of the original Seven Sisters made the list of the top forty ranked institutions, but it is Mount Holyoke that has the single highest percentage of international students among elite US liberal-arts colleges, with 664 international students accounting for more than 25 percent of this year’s student body.

The tenth annual conference of the International Student Service is held at Mount Holyoke, attracting 200 delegates, faculty, and students from thirty-seven countries.

The Faculty Committee on Foreign Students is formed at Mount Holyoke. It awards fellowships and scholarships to international students and paves the way for the College’s Foreign Fellowship Program.

Mount Holyoke becomes one of two-dozen American colleges and universities to participate in a $2.5 million program to provide full scholarships to select African students.

The McCulloch Center for Global Initiatives is founded at Mount Holyoke. The center encompasses study abroad, international internships and research, and services for international students, including orientation, advising, and information about immigration regulations.

To learn more about the value of the international experience at MHC today, we asked Dean of International Students Donna Van Handle ’74 to convene a group of students—four international seniors, three international first-years, and two domestic seniors with study-abroad experience—for a roundtable discussion at the Blanchard Campus Center. Van Handle moderated the discussion and was assisted by Paus. Edited excerpts of the group’s conversation follow. 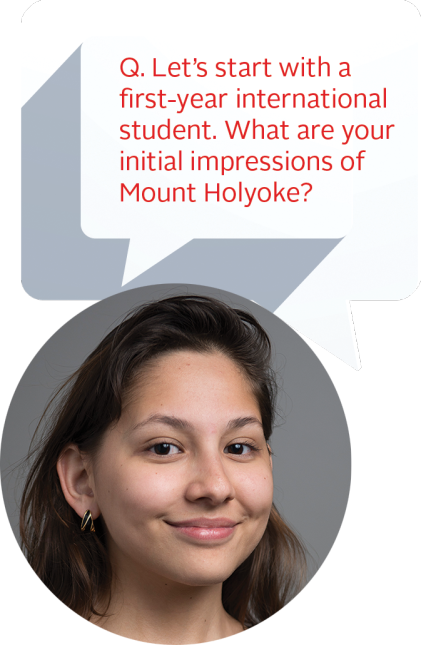 “
Jasmine Tham ’17 (France)
First it was overwhelming. But I just thought it was such a beautiful campus, a place where community and sisterhood was. I was just enchanted, under the impression that I can do really great things here. Everyone’s so supportive.
” 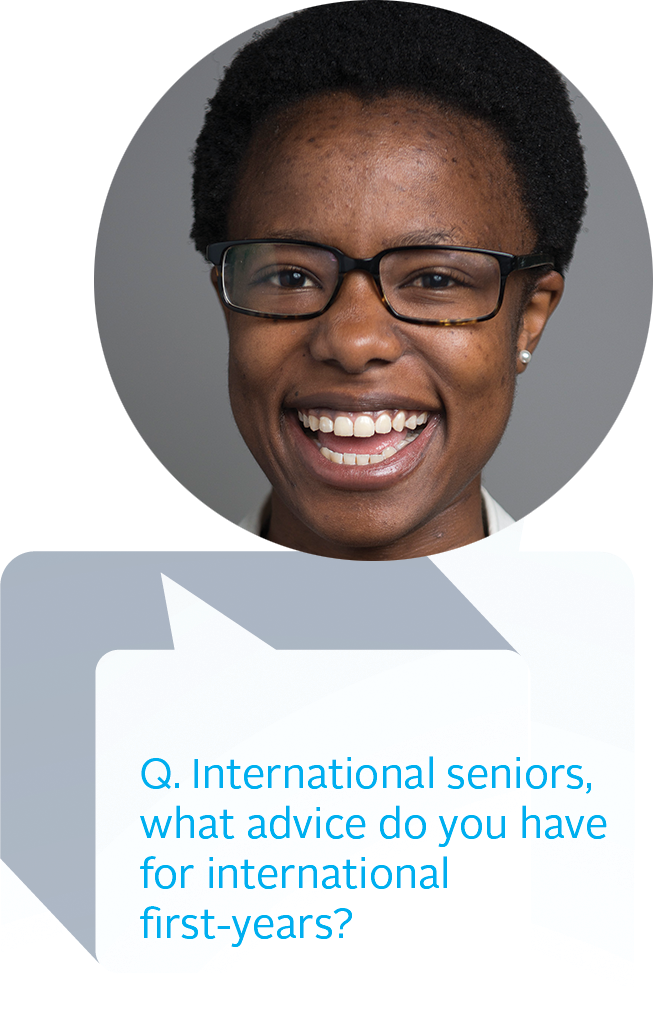 “
Tebo Molosiwa ’14 (Botswana)
Don’t only challenge yourself academically but also challenge yourself socially. I think it’s very easy for us as international students to gravitate toward what we know, what is comfortable, and so you find yourself staying within those groups. But try things that you never tried before. Immerse yourself in totally different cultures. . . In the beginning, I’d be like, “I cannot do any of these things.” But you can’t speak about these things until you try them. You can have an opinion about something after you’ve tried it. One of the saddest things for me, I think, would’ve been me leaving Mount Holyoke the same way I entered it.
” 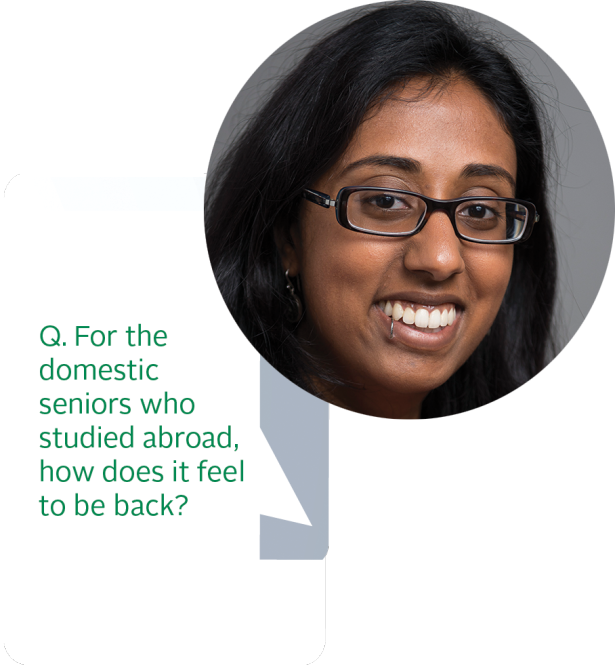 “
Alyssa Mohamad ’14 (United States)
Coming back to Mount Holyoke felt like coming home. I think it was helpful having been abroad to be able to tell what kinds of services international students might need. As a domestic student, you might not automatically think, “When international students come here, they’ll need help figuring this out or figuring that out,” because it just seems natural. But after being abroad, it helps to give perspective of some of the services that they might need that Mount Holyoke really does help provide.
” 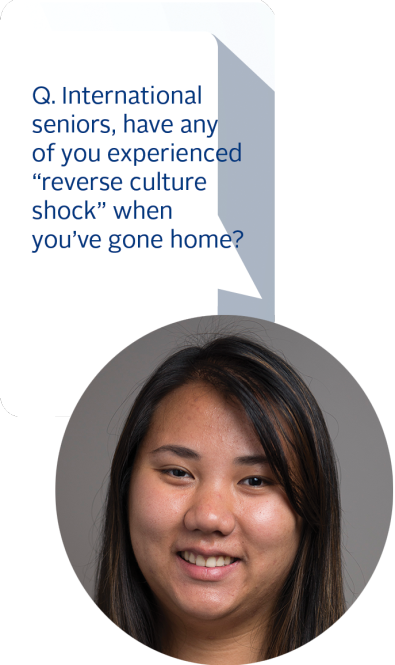 “
Sin Seanne Ng ’14 (Malaysia)
I’m here as an international student, and I hold an identity that I am from Malaysia. But going home, people question that: “So, you’re American now?” I’m like, “No, I’m still Malaysian.” I’ve never viewed myself as American. And then people have told me things like, “You’ve been abroad; you have no idea what’s going on at home,” which is also not true. Just because I’m studying in the US and given the privilege and the opportunity to pursue an education in the United States does not make me forget where I come from or be ignorant of what’s going on at home. I may be seeing things from a different perspective now, but that doesn’t change my identity as a person, as a Malaysian, or as an Asian.
” 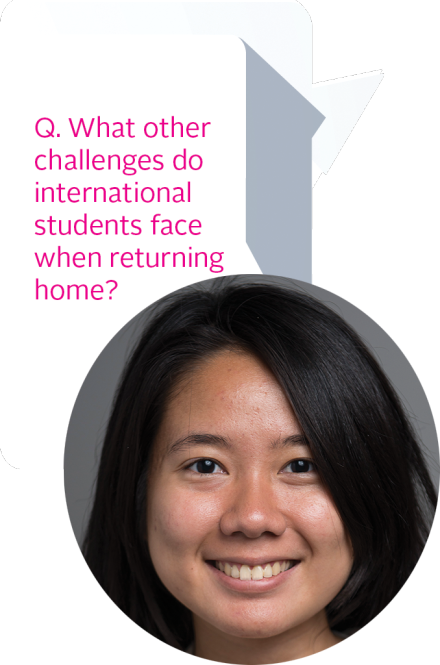 Mount Holyoke is pretty liberal in a lot of things, and when you go back home, you tend to have a lot of frustrations. “Why aren’t they doing it this way? Why are they thinking this way?” My biggest advice for international students is do not form a superiority complex. Try to understand. Our education here is to form opinions and to critique but also to realize what our position is back home. Don’t think, “I had a wonderful education abroad and therefore I’m frustrated, I’m giving up on my country.”
” 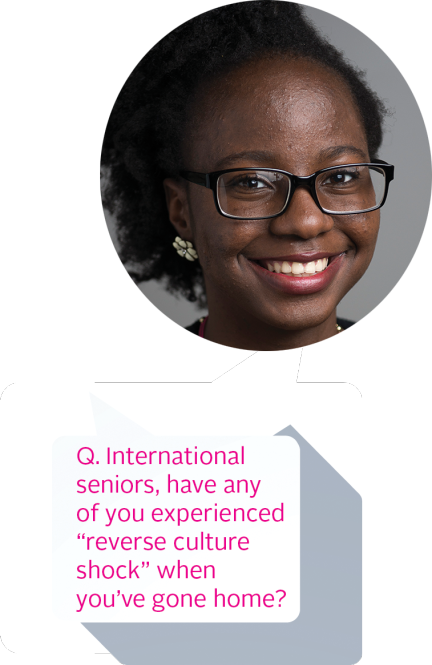 “
Ifeyinwa Arinze ’14 (Nigeria)
As a Nigerian I didn’t really expect this, so it hit me even harder when I heard some stereotypes or preconceived notions that people had about thinking Africa’s a country [rather than a continent] or thinking that everybody in Africa acts the same or dresses the same or thinks the same. Mount Holyoke is a great place, but still you have to educate people about where you’re coming from. Come in knowing that you might get these questions, and it’s offensive, but the person who you’re talking to might not be malicious; it’s just coming from a place of ignorance. . . Sometimes diversity is hard, but I think that’s why Mount Holyoke emphasizes dialogue and being inclusive.
” 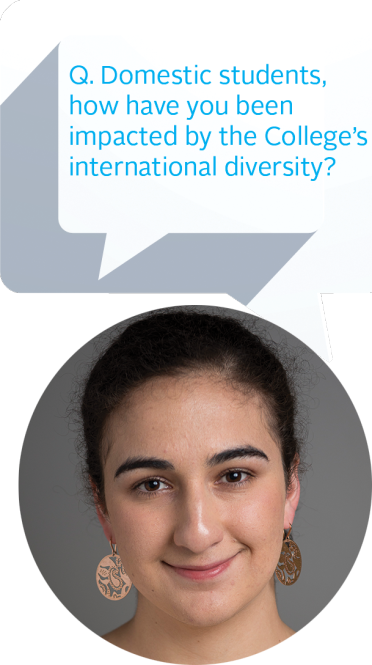 “
Aurian Eghbalian ’14 (United States)
I’ve made so many connections beyond my wildest dreams in terms of being able to, say, practice Japanese with someone who’s from Zimbabwe or learn how to tango from a girl from Spain. All these connections that you have on a day-to-day basis can ultimately lead to something greater in life. Diversity helps break down those stereotypes you previously had. Having a place like Mount Holyoke bring so many people from all around the world to help broaden your senses is just really amazing.
” 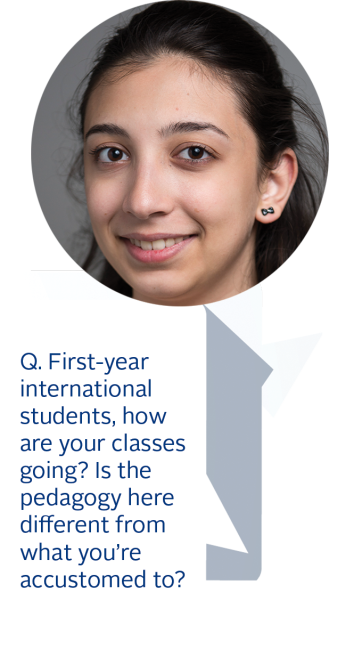 “
Farah Rawas ’17 (Lebanon)
In high school, I was in the scientific section, so all the subjects I took were in math, physics, chemistry, biology— all science. When I came here, I had in mind that I wanted environmental studies or something with engineering. But my advisor wanted me to take this seminar in music, take this class of philosophy. He encouraged me, and I did it. I have now a hip-hop class, a first-year seminar in music, and a philosophy class. It felt so nice. I learned so much about myself that it made me consider a minor in humanities, even though I’m so much into science.
” 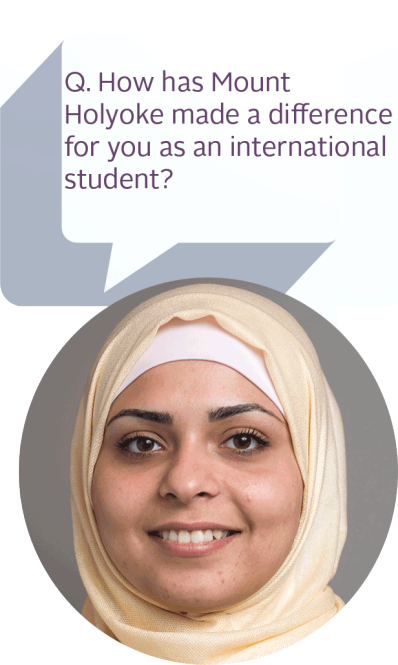 One response to “Voices at the Table”