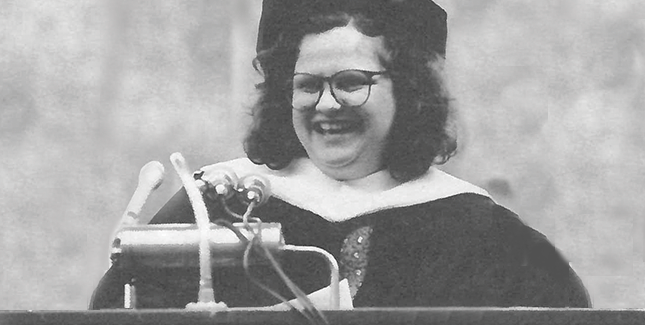 The summer 1990 Alumnae Quarterly included a transcript of playwright Wendy Wasserstein’s ’71 commencement address to the graduating class. A full transcript of her address appears here, as well as a selection of excerpts from other alumnae who were featured commencement speakers through the years.

One’s worst nightmare is having a paper due for your own college nineteen years after graduation. A friend of mine advised me to take off my robe and sit down in front of the stage and say, ‘Let’s just keep this informal. I’ll take questions.’ My other thought was to invite Mrs. Vaclev Havel to join me since I heard Mrs. Gorbachev will be at Wellesley, and I didn’t want my own college to be deprived…
¶
[At my graduation] I remember thinking as each of my classmates paraded by, ‘Oh, she’s done everything right with her education. And I’ve done everything wrong. She’s going to medical school and memorized The Golden Bowl. She learned to ski, ride, and canoe…and I went to Milk ‘n Crackers…’ I had no idea what my college education was for…

There is something to be said for unchartered periods, something to be said for exploration in any field. If after almost twenty years I’ve been invited to speak here, it can certainly happen to you. I know there are those of you who dissected a squid in freshman year zoology and immediately knew, ‘This is bliss.’ But my guess is that the majority of you aren’t that fortunate or that fond of squid. Most of us find our roads in a more circuitous way…When I look back, what really scares me is how very much I was frightened of pursuing what I really liked to do. I didn’t think I would become a playwright. I wanted to make a more reasonable choice…to fall in line. And I was certain there was a formula, an accepted and pretested pattern…

Today the curtain goes up and the action begins. Take all the goodness, honesty, intelligence, toughness, and wit that you have learned here and don’t compromise them.
Wendy Wasserstein ’71

In drama school [two years later] we began reading a great deal of Jacobean drama…It seemed to me that the plots were roughly about men who kissed the lips of women and then dropped dead from poison…This was not familiar to me or any of my friends from Mount Holyoke. And it was then I decided I wanted to see an all-women’s curtain call in the basement of the Yale School of Drama…So I began writing Uncommon Women and Others about my friends and my times at this college. And it was at that time I understood the extraordinary value of a liberal arts education at a women’s college. I believe I had the confidence to become a playwright because I learned at Mount Holyoke the value of an individual woman’s voice. There was a higher purpose to what I enjoyed the most here: talking to my friends and taking the time to really know them. In other words, what may well resonate in your later life is…the sense of self that you formed here. There is no one plan that is workable. There isn’t one way of doing it that is best. But there is something to be said for caring deeply…

Excerpts of speeches by other alumnae commencement speakers: 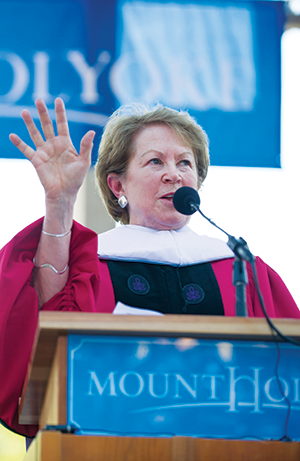 And, inspired by that mission, Mount Holyoke is developing a powerful and exciting model for twenty-first-century liberal education—a model that deliberately and actively prepares college women to connect your learning with the world’s most important questions. Or, to put it differently, where it was standard practice in the twentieth century for liberal arts institutions to downplay the connections between thought and action, or between knowledge and decision-making, Mount Holyoke is renewing that connection in a bold and far-reaching way. 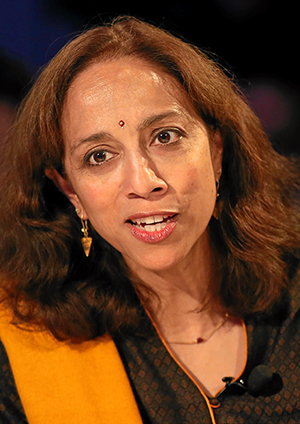 Twenty-eight years ago I stood where you stand now—with flowers in my hair, my heart in my mouth, and waves of exhaustion, exhilaration, and terror sweeping over me in quick succession. (I’ll confess that the heart in my mouth and slight terror holds true today especially facing an audience as impressive as this one!) As a junior transfer student from Delhi University, I had only two years at MHC, and although I had tried to pack in everything from Glee Club (faking the sight-singing part of the audition and then being caught by Cathy Melhorn and sent off to remedial theory class!) to my first dance class (I met Mikhail Baryshnikov in the dance studio at Kendall with the poet and MHC professor Joseph Brodsky) to four fabulous off-campus classes—at Amherst and Hampshire—it still felt far too short.

Most of all, I felt as if I had only just begun to get a taste of being a woman learning and leading in a world where women count.

Twenty-eight years ago I stood where you stand now—with flowers in my hair, my heart in my mouth, and waves of exhaustion, exhilaration, and terror sweeping over me in quick succession.Kavita Ramdas ’85

For it was here that I discovered an alternative universe. A world where no one had to remind you to “lean in” because every woman you met already had her shoulder to the wheel and was moving the needle on everything from microbiology, to astronomy, to rowing skiffs down the rivers, to challenging history with herstory. A world where your intelligence, physical competence, and spiritual insights were obvious to all, were seen, and were valued. A world where women loved men and women loved women and the love was what mattered. A world where you were surrounded by women who wrote poetry, discussed politics, edited books, dismantled engines, designed buildings, ran government, managed newspapers, and danced for the sheer joy of being able to do so. A world where women were not less than but equal to. 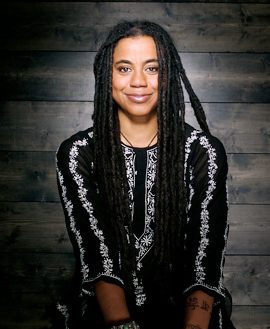 Suggestion #15: Love Yrself. Why not.

16 years from now who will remember these words? Maybe no one. But maybe someone will. Maybe, from back in 1985, there is a classmate of mine who, to this day, remembers every word of our commencement address and this classmate repeats those words and they lighthouse her stormy days, maybe. Or if not a classmate remembering then maybe an alum if not an alum maybe a family member, maybe a parent, up there, gathered in the background having given so much, helping you get to this special day. Whether my words today will be remembered is not the issue because, you see, what Im saying to you right now isn’t as important as what you are saying, right now, to yrselves. 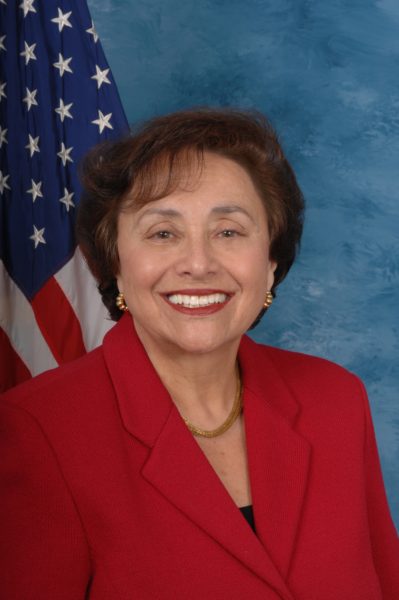 “As your pursue careers and goals, self-aware and focused…from where will you draw the experience to fuel a new passion?…Will you retain that special understanding of the circumstances that shape ordinary lives…or drift into a new elite, open to both sexes, but as divorced from daily concerns as those before it?…Just remember that where once those connections were natural and unavoidable, now you must make an affirmative decision to reach across the gaps, drawing on understanding and passion from character and conviction…Never forget that the truest measure of success, the purest passions come always from within ourselves.” 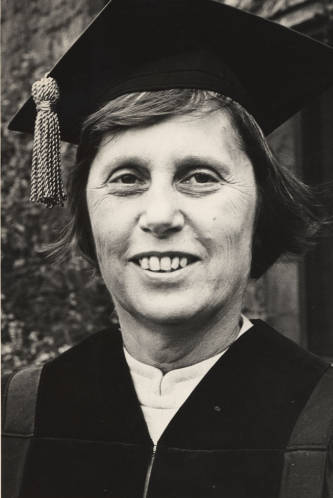 “Here I was always taken seriously, first as a student, then as a teaching assistant and graduate student. There were many models to emulate, on the faculty, in the administration and among the speakers invited to our campus. Here I was encouraged to think of my life not as something that would happen to me, but as something that I would shape for myself. We were encouraged in the view that to share a passion for helping others was a joy and not a drudgery.”