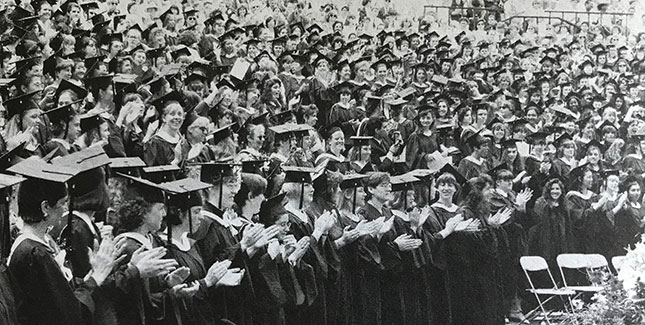 Graduates at the 1992 commencement ceremony give Representative Pat Schroeder a standing ovation. Photo from the 1992 summer issue of the Alumnae Quarterly

At the 155th commencement ceremony in 1992, Congresswoman Patricia Schroeder spoke to the graduates about women in leadership and the value of public service, urging them to get involved in politics. Below are excerpts from her rousing speech that day, after which she received a standing ovation. 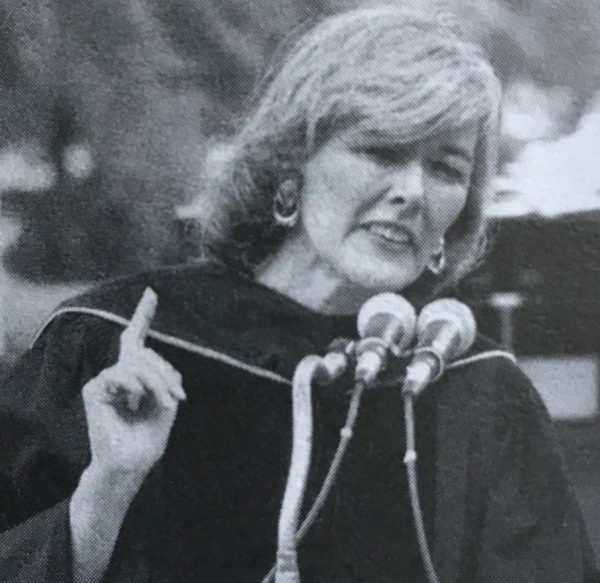 Pat Schroeder delivers the Commencement address to the class of 1992. Photo by Kim Grant ’84

I stand before you today terrified. Because when I graduated, we were in an era where it was asked not what your country can do for you, but what can you do for your country. I don’t hear that today. I came from an era where we got goosebumps if we thought about working for the government. If you worked in the Justice Department, you were going to be on the front lines of breaking through civil rights; opening up civil rights for all sorts of people, moving on environmental issues, moving on all sorts of things. The ideal of being able to be part of that was very exciting. Today you try to convince somebody that they might want to work for the Justice Department, and they look at you like you are nuts. The same with all sorts of other parts of public service.

I think we have a tremendous public service crisis in this country. Young, brilliant people like yourselves are usually thinking about public service as the last choice if you can’t find anything else to do.

We must talk about the future, today, because that is where you and I are going to reside the rest of our lives. You are going to reside in the future longer than I am. I think every decision we make in this country, in this decade, should be based on whether we are getting ready to compete for the highly skilled, highly educated, highly paid jobs or whether we are getting ready to compete with the developing world. If you like the developing world model, we are on the right track. You keep running the debt higher. You keep having more and more adolescent pregnancies every year. You keep losing all your skilled jobs to more trained countries. And on, and on, and on. That is not the model I want. I don’t think that is the model you want for your future.

Politics is not a dirty word. The whole world has wanted to have the system we have, and we are walking away from the system we have, saying it doesn’t work. Yes, it works. It works if you move from the prior three Rs you’ve studied: reading, writing and arithmetic to the new three Rs of citizenship: remembering your roots, accepting your responsibilities and continuing to push for equal rights for all across the board. Those are the three Rs of citizenship.

We desperately need you there as a critical mass. To think that we have gained five women in the House in almost 30 years is shocking! If you have a picture in front of you today of 406 men and 29 women, you would think that it was imbalance. Think of how the country would go nuts if you flipped it, 406 women and 29 men!

Please go out. Take your dreams — make them reality. Claim the future. Claim your wonderful heritage from Mount Holyoke. See that hill and take it. Because if you don’t take it, and if you don’t care enough to act, who will?