A Closer Look: Paranoid Parents: Get a Grip! 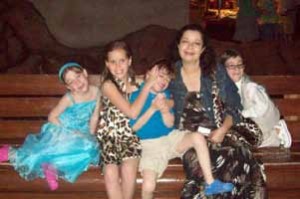 When Christie Horn Barnes’s husband died suddenly of a stroke six years ago, she was left alone to parent two-year-old triplets and a daughter who was four. Panic set in.

“I was in shock,” the 1977 alumna recalls of her bereavement and the consequent hyper-attention she paid to protecting her children. “I worried about them crossing the street, playing with strange dogs—anything.”

Barnes for several years fed her hunger for safety by running a store that featured the safest children’s products she could find, including high chairs, jogging strollers, and educational games. In surveys she did of her customers, 75 percent admitted they, too, worried about absolutely everything.

“One woman came up with 225 things she worried about,” recalls Barnes. “And that’s what really got me going on The Paranoid Parents Guide.”

For three years, she called federal agencies, health-care professionals, and everyone else involved in children’s safety, and started to compile a database. What she found surprised her.

Forget about the shark attack or football concussion or tainted food or the horrors of plastic, she notes in the guide, published in September. Parents who want to find the middle ground between raising independent kids and being racked with worry need only focus on two things.

“If kids wear bicycle helmets and are buckled into car seats, it cuts down the death rate 90 percent,” she says. “Do these two things and there’s not a whole lot else to be afraid of.”

Is she kidding? Did she miss the story about the doubling in incidence of hideous, infectious diseases, or the exposé on school shootings in small towns? No, she did not, and that’s just the point.

“Busy parents base their worldview on what they see on the news,” Barnes says. But news and talk-show coverage of teen suicide, child kidnapping, and stranger danger are all aberrant events. “It’s not a good assessment of what’s in your world. It’s about sensation,” Barnes underscores.

Coupled with the marketing dogma that fear sells better than happiness, we are spoon-fed our worst nightmares about things we can’t control. “And folks are really bad at understanding that kind of risk,” Barnes says.

The Paranoid Parents Guide offers lots of facts and the tools to help moms and dads parent with common sense. Children are not kidnapped and killed in droves, as some reports would lead you to believe. In fact, the biggest killer in every age group is the car accident, hence her focus on seat belts.

Barnes’s research left her with enough material for a series of Paranoid Parents books. Her next two guides will focus on education—our schools are not bastions of illiteracy and violence, as some media would have you think, she says—and food.

Raising healthy, independent children is not easy, Barnes admits. But moms, dads, and kids would all breathe a sigh of relief if the parenting approach shifted from endless hovering to supervised risk taking.

“We’re seeing kids who are starting driver’s education who have never crossed a road by themselves,” she says, incredulously. “Your purpose as a parent is to prepare them for the world outside without you.”

Anyone for a midnight swim?