Jessica Brezicha ’10 Does Something Fishy 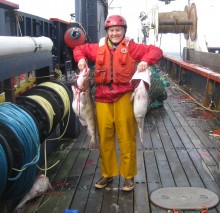 Jessica Brezicha ’10 majored in biology at Mount Holyoke but had never touched a live fish until she was hired for her current job as a scientific observer on commercial fishing boats in the Bering Sea. These days Brezicha is besieged by fish; she collects biological data on them for the National Oceanic and Atmospheric Administration (NOAA) and ensures that the US-flagged vessels on which she works are complying with federal fishing regulations as they trawl the sea between Alaska and Russia.

The science When the net is pulled on board, I take a sample and collect data on the number of bycatch species. (Bycatch is any organism that is not the target species.) The boats I work on have the lowest bycatch rate of any fishery at 1 percent. Some fisheries can get up to 500 percent bycatch. I also collect data from the target species. NOAA wants to see changes in the population of commercially fished species. I take length, sex, and weight measurements.

The compliance I write down GPS coordinates of where we are fishing to make sure the boat is not fishing in closed areas. There are a ton of regulations on which fish can be thrown overboard, so I am also out on deck making sure all those rules are being followed. The other day a blue whale surfaced right next to the boat and scared the crap out of me with its exhale. Just a normal day at the office.

The fish I mainly work on pollock trawlers. We haul a huge net the size of a football field for eight to twelve hours, dump the fish into refrigerated saltwater tanks in the boat, then carry on fishing till the fish holds are full. When the tanks are full we head to port to offload at the factory. The pollock fishery is the largest in the US with almost a billion-pound quota each year. Pollock are the fish that fish sticks, Filet-O-Fish at McDonald’s, and imitation crab are made from.

The catch My job is part of the effort to manage the fisheries based on data to try and keep them sustainable. When I see the sheer volume of fish coming to the factories—they can process around 4 million pounds of pollock every twenty-four hours—it seems like too much. There is definitely less pollack than there used to be. When they started fishing commercially for pollack in the ’80s it took three minutes to fill the net. Now it takes eight to twelve hours. 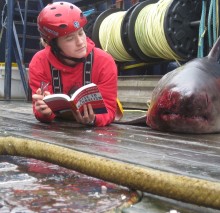 Brezicha with a favorite pastime
(and with a six-foot salmon shark,
a cousin of the great white)