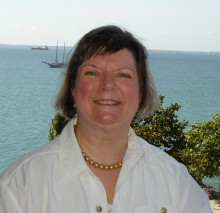 Cynthia Graham Tether ’72, who lives in Bronxville, NY and has no particular ties to Boston or the marathon, watched news of the tragedy on TV. “Moved by the resilience, courage, and compassion of the people of Boston,” she wrote this poem. “I hope the verse will bring peace and comfort to all who read it,” she writes.

We Are Boston, BOSTON STRONG!

The sun was bright, the day was clear,
It was the Springtime of the year.
The chill of Wintertime was gone ~
It was the Boston Marathon.

Love and hope were in the air;
Peace and joy were everywhere.
Then bombs with sounds like rolling thunder
Split the peace and joy asunder.

The gates of hell were burst ajar,
And cries rang out from star to star.
The peace was rent; the smoke was dense,
And Boston lost her innocence.

To those who grieve the lives cut short,
Whose plans the bombers would abort,
May time and care your bodies heal
And soothe your souls and all you feel.

There is a balm in Boston’s love
That bombs and bombers know not of.
As daylight fades and night appears,
We’re here to lift you from your fears.

It’s not a win, it’s not a rout…
Boston’s down, but she’s not out.
To those who seek to kill and maim,
You fail to understand our name ~

You will not keep us down for long,
For we are Boston, BOSTON STRONG!